Sexualizing teen stars to be banned by new guideline

Government officials are attempting to prevent the revealing styles of teenage pop idols as they warn against the media’s portrayal of young women as sex objects.

The Fair Trade Commission (FTC) Friday announced a new guideline for standard contract terms between production companies and artists, which include preventing underage singers from dressing in excessively sexual clothing. Management shouldn’t deprive the boys and girls in showbiz from their educational opportunities either, the FTC said, and needs to protect them from long working hours.

Well, announcing a guideline ought to put a stop to all of this. Now entertainment companies won't have their teen stars wear skirts so short they show off their underwear, and the media will stop portraying "young women as sex objects."

Such as this Joongang Ilbo article which was at the top of Naver awhile ago titled "Chinese netizens go wild over Son Yeon-jae," which gave a matter-of-fact account of what Chinese netizens were writing about the girl known in Korea as the 'gymnastics pixie' (much as Kim Yuna was once the 'figure pixie'). It was mostly stuff like "A Korean girl like a dream," "absolutely perfect," "a Korean body you can’t help but dream about."

Much the same thing happened when Son appeared at the 'LG Whisen Rhythmic All Star 2011' gala show last Sunday, with Asia Gyeongje publishing a slew of photos from the show with titles like "Son Yeon-jae’s captivating look – her ‘pixie’ image disappears," "Son Yeon-jae’s seductive beckoning," "Son Yeon-jae shows off her s line," and "Son Yeon-jae’s stand out s line": 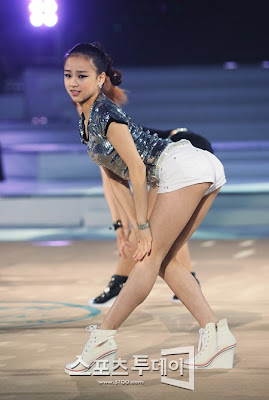 I suppose someone could point out she just turned 17 and that headlines like that might be inappropriate, but then, she is four years older than the age of consent, so perhaps it's all okay after all. Besides, according to this, she may have wanted to get a reaction:

"I’ve always been seen with a cute and youthful image but now I want to show a transformed me."

Mission accomplished. One wonders if that's something she wants - or if its more her management's idea. At any rate, being cute and known for your 's-line' will probably ultimately mean more advertising contracts. As for the performance, the training video shows some ho-hum 'sexy' dancing, but I'm more impressed by the 'human windmill' thing she does at 0:55.

I just wonder, since it's a "guideline," how much of an effect will it really have?

True story: got a call from a friend working at a public elementary school in Seoul. Last week during gym class? Pole dancing.

Well, they talk about young girls, but boys in the entertainment are also seen as a sexual object by many "fans"... That rule should aply for male idols/entertainers too...

Contact Team USA(or Canada or ?) to request rythmic gymnastics be replaced as an olympic event.
http://www.teamusa.org/contact_us/ngb
There are many other events that are less likely to enable countries like S. Korea to sexualize teenagers. I say put some other event on the list or reconsider replacing women's softball. How has S. Korea sexualized its women's softball team members? If they haven't, how might they? Next up, sexualizing the S. Korean female weightlifters, but they'd have to get a teenager on the team. For S. Korea to sexualize its teen K-Pop stars is one thing but its teenage olympic athletes is another.
Lina,
Are those young boys you mention teenagers? Do those young boys take their shirts off, shake and slap their buttocks, and stick their crotch in your face?

Hey Matt, you know none of this is legally binding. It's just a way for the FTC to say their doing "something"~ It's a joke. http://joongangdaily.joins.com/article/view.asp?aid=2937751

It appears the FTC has merely suggested that companies voluntarily adopt these guidelines which in themselves are so vague (i.e. sexual clothing is ok, but "excessively" sexual clothing is not) that perhaps the only thing they will accomplish is creating more controversy and titillation.

The first performer's video to called into question for possible "breach" of the "excessively" sexy standard will probably go platinum from the attention alone. The whole thing almost seems like a publicity stunt.

The genie seems to be out of the bottle on pop-star sexualization and I'm doubtful whether there's a sincere interest in trying to put it back in. Will Korea's desire to be recognized for its lofty virtues and feminine modesty overcome its craving for int'l attention and competition on the "world stage"?

I'm no pop music or K-pop music expert but, at least since "Elvis the Pelvis" gyrated his way to extreme fame and and extreme controversy in 1956, it seems that if you're competing in the pop music industry sexualization is what it's all about. Have there been many pop idol sensations since then who haven't engaged in pushing the "excessively" sexual envelope?

This Son Jae Young girl is actually kind of interesting. Not only was she in those L.G. commercials with Park Tae Hwan, but she was also in those creepy sanitary napkin commercials. I thought they were creepy because they had all of these 14 year old looking girls stretching and then making kissy faces at the camera

This is my e-mail message to TEAMUSA...

Does TEAMUSA help to exploit female teenagers? I say it does! How? By voting for and supporting Rythmic(Sexy Dance) Gymnastics. I'm sorry but I'd rather watch softball or baseball(two events recently OUSTED). Why does TEAMUSA support S. Korea and its sexualization of female teenagers(Son, Yeon-jae) through Photos etc...?
VIA
http://populargusts.blogspot.com/2011/06/sexualing-teen-stars-to-be-banned-by.html
Because of the photos below Chinese citezens are going nuts over Son, Yeon-jae's body. What is more important to TEAMUSA and the events it supports or the skills of a female athlete and the sexualization of them?

Do you really think Son, Yeon-jae(just turned 17 years old) would say "I’ve always been seen with a cute and youthful image but now I want to show a transformed me."

One wonders if that's something she wants - or if it's more her management's idea?

But, who cares right? TEAMUSA is more concerned about bringing SEXUAL attention to the Olympics than caring for teenage female athletes.

Below you will see direct mentioning of Son, Yeon-jae's "S-Line" which means her body. Congratualtions TEAMUSA for supporting countries who are more interested in the bodies of TEENAGE GIRLS than sport.