The return of the bus conductress

This photo appeared on the Korea Times' site yesterday: 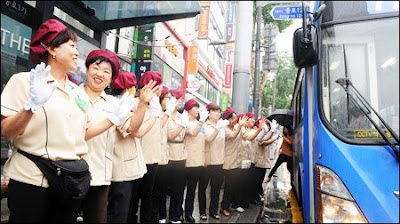 Please use buses: Women who worked as bus conductors in the 1970s wave to passengers in their old uniforms at a bus stop in central Seoul, during an event organized by Seoul City to promote the use of public transportation, Wednesday.

They seem quite cheerful, which stands in contrast to the description of their job found on this page about extinct jobs:

In the 1960s, the major means of transportation was by bus. The buses of those days had only one hand-operated door in the middle, while the bus of today has two automatic doors for entrance and exit. Therefore, people back then got on and off through the same door.

The conductress system was introduced in 1961. The average age of conductress was only 17 and most of them were country girls who came to the city to earn money to support their families. Bus conductress collected bus fares, and pushed passengers into the bus, and dragged passengers trying to get off the bus. In particular, when a bus was jam-packed during rush hour, conductress had to be as strong as Hercules in order to push the passengers on. They also opened and shut the door and called "Oraii!!" to the bus driver striking the bus as soon as all the passengers had got on. If the bus was too crowded, it used to run on with the door open. Sometimes, this caused unexpected accidents. Bus conductress used to fall off from the bus and get injured, or even die in the worst cases.

The conductresses were superwomen. They worked from 4 a.m. to 12 p.m. They had no break time, because they had to clean the bus and run trivial errands for the driver. Bus companies provided them with room and board, but it was terrible. Their lodgings were really narrow and had no proper shower stall. An avalanche of protests was heard after a bus company frisked conductresses on suspicion of their stealing money. The number of applicants decreased in the beginning of the 1980s, and the shortage in conductresses became worse. Finally, the automatic bus was introduced in 1985. Passengers no longer paid the bus fare to the conductress and put the fare in the fare box. In 1989, conductress finally faded into the mist of history. 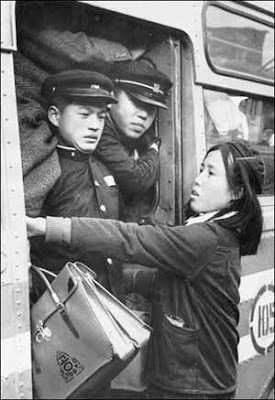 The mention of accidents reminds me of the main character in Yeongja's Heyday, the most popular film of 1975, who works as a bus conductress and loses her arm in an accident, leading her to become a prostitute. The reaction to the friskings the girls received is mention in this Korea Times op-ed article from February 1976 about the trials faced by bus conductresses: 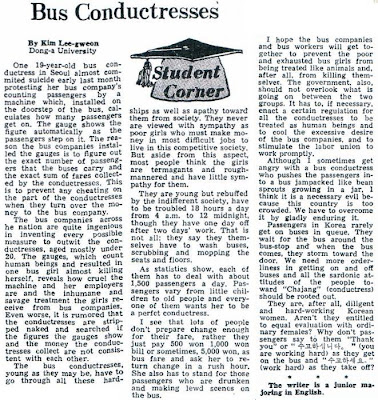 Another extinct job mentioned at that site is the dabang DJ - do give it a read. Today I suppose there's no reason to have a DJ play your songs when you can simply sing them yourself. The Joongang Ilbo today took a look at the history of the noraebang - which turns 20 this year, a topic that Antti Leppänen delved into five years ago.

And on the topic of things that have disappeared into the past, this post is worth looking at.
Posted by matt at 2:18 PM

thanks. cool story. volunteer at the KWWA. the stories from working women, their labor, and living conditions are pretty intense. hadn't known about this job.

Hey Matt, I've read a few of your blogs. I really like what I came across. I'd like to get your email so I can send you some information that I think you might be into.

The conductress is still a feature on many buses and trolleybuses in the former Soviet Union.

I actually saw one on a bus last weekend. We were visiting Taean-gun and Anmyeon-do, and saw an ajumma trying to be helpful while shushing a group of boys. Kiwi said she was a conductress, and it's interesting to heard the rest of the story.

If the writer of that article thought Korea was "too crowded" in 1976, I can only wonder what he thinks now.