Here's a Korea Times article about future plans for Seoul from January 1, 1970: 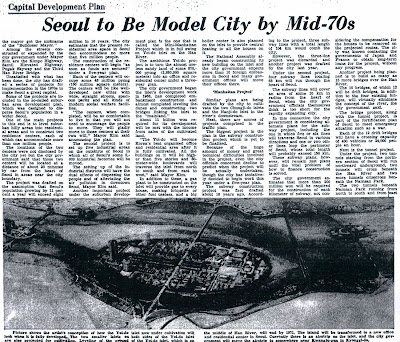 It's interesting to see that there was another mayor of Seoul known as the 'bulldozer' - perhaps he was LMB's inspiration. Most of the plans mentioned in that article came to fruition. Yeouido did become Seoul's 'Manhattan,' I suppose (but is still under construction). Views of what it looked like when it was an airfield (mentioned in the article) and how it looked in 1975 while it was being developed can be seen here and here. Seoul did indeed spread south across the river (beyond the already existing Yeongdeungpo area), initially to Banpo and Jamsil. While the subway system grew beyond the dreams of the planners, by the mid 1970s only Line 1 was open. More than 15 bridges were built, but the only tunnels under the Han River are for subway lines. As for the islands in the Han River, Nanji-do was 'cultivated' into a garbage dump (long since covered by Sky Park, west of World Cup Stadium) while Chungji-do (중지도, which it turns out seems to be another name for Nodeulseom) is still undeveloped today since funding was cut for mayor Oh Se-hoon's Opera House project on Nodeulseom.

The success of these plans goes to show what a playground the city has been for government planners - something that has changed little in the past 40 years.
Posted by matt at 1:56 PM