I'd been made aware of Bok Koh-ill (복거일)'s controversial 1998 book "National Language in an Era of International Language," in which he suggested Korea adopt English as an official language, awhile ago by Ben Wagner, so this July 23, 1998 Korea Times article about his ideas caught my attention when I came across it. 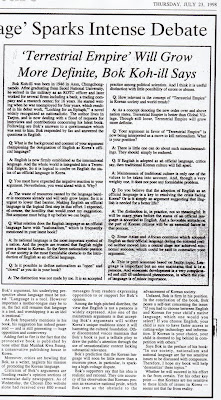 Bok has since written further on this subject, as well as writing defenses of capitalism. Any doubts about his nationalist credentials would seem to be removed by the fact that he'd been writing nationalist novels for over a decade at that point, with his first book apparently being about an alternate reality in which Ahn Jung-geun failed to kill Ito Hirobumi (which sounds similar to the movie "2009 Lost Memories").

Needless to say, his ideas were not popular with a good many people: 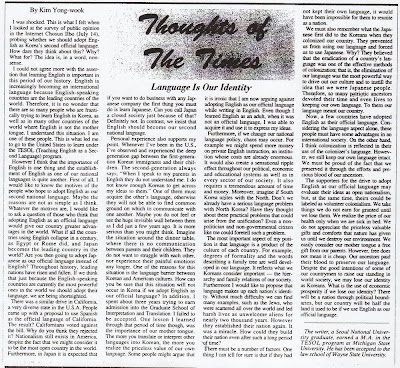 At the same time, however, it seems Bok's ideas weren't as outlandish as the public backlash might have made them out to be. In a survey done in 1999, Shin Gi-wook found that 54% of respondents agreed with the statement "English should be the second official language in
Korea." The essay in which this appears, "The Paradox of Korean Globalization" goes quite a ways toward explaining why a nationalist would consider downgrading Korean to a regional dialect in exchange for making English the official language:

“Western technology, Eastern spirit,” a highly popular slogan in early twentieth century East Asia, reflected Asians’ desires to appropriate Western technology and science, even as they faced the encroaching forces of global imperialism. This practice was known as “defensive modernization”, where modernization meant defending Asians’ own nations from Western aggression. The ultimate goal was therefore national sovereignty and independence, not modernization per se. The current discussion of making English the second official language in Japan and South Korea can also be understood in this context—as a global language (or the language of the Internet), English is considered a crucial instrument to enhance Korean and Japanese national competitiveness in a global market. [...]

Korea’s globalization can be understood in a similar way. Under the name of segyehwa, the Kim Young Sam government attempted a top-down reform of the Korean political economy to meet the rapidly changing conditions of the world economy. In the Sydney Declaration of 17 November 1994, Kim formally announced his government’s drive for globalization and set up the Globalization Promotion Committee (segyehwa ch’ujin wiwônhoe), or GPC. The GPC was headed by the prime minister and consisted of a set of committees on policy planning, administrative reform, educational reform, and science and technology (see Gills and Gills 2000). Korea’s globalization drive was initiated by the state, and segyehwa was kept as a name for Korean way of globalization.

In laying out his policy of segyehwa, President Kim put it in a historical context. First he reflected on Korea’s modern history, comparing what Korea faces today to “the challenge of similar revolutionary changes at the turn of this [twentieth] century” (Kim 1996, p. 9). Yet with only “a vague awareness of the need to pursue modernization,” he contends, Korea failed to reform and subsequently became a Japanese colony. Since the 1960s, Korea has been remarkably successful in its efforts to modernize and industrialize, but is not well equipped to meet the new challenge of globalization. His segyehwa policy is thus necessary “if Korea is to survive and thrive in this age of increasingly fierce borderless global competition” (Kim 1996, p. 15).

So Shin argues (in an essay which also appears as a chapter in his book 'Ethnic Nationalism in Korea') that embracing globalization - something seemingly the opposite of nationalism - was in fact done to achieve nationalist goals - to survive in a world (perceived in social Darwinian terms) of "fierce borderless global competition". Seen in this way, the nationalist argument for English to replace Korean as the official language begins to make sense.

bad idea imo. koreans should preserve their language, not downgrade it.

wasn't there an old saying that you counter heat with heat and poison with poison? It makes more sense now.