Standing up to emperors and dictators 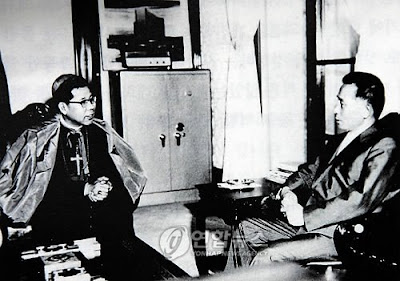 The Joongang Ilbo has a lengthy look at his life here, and looks at the different people paying their respects at Myeongdong Cathedral here, while Brother Anthony of Taize remembers the Cardinal here. At the bottom of that article we see photos of Kim Young-sam and Kim Dae-jung before the Cardinal's coffin; Chun Doo-hwan also paid his respects. It should not surprise regular readers of this blog that I found this article to be very interesting.

Archbishop Yoon Gong-hee, who once headed the Gwangju archbishopric, recalled yesterday that on May 23, 1980, he received a letter from the cardinal through a chaplain, without the knowledge of the military, which had blocked all roads and communications in and around the southwestern city.

"I am very concerned that so many people were either injured or dead. I know it is a very difficult time, but I hope everything will end peacefully,'' Kim wrote. Alongside the letter was 10 million won in cash.

"People criticizing the government were arrested on rebellion charges. The cardinal didn't write at length or specifically, but people in Gwangju were more than impressed to have received such a consoling message during such a turbulent time from the cardinal,'' Yoon said. The money was used to treat victims, Yoon said.

The late Cardinal had always showed compassion for Gwangju, and when Pope John Paul Ⅱvisited Korea in 1984, Kim allegedly advised him to visit Gwangju first. The pope indeed started his visit in the city, walking along Geumnam road and Provincial Office square, where the military suppressed and even killed citizens advocating democracy. He then moved to the Mudeung Stadium to hold his first mass.

Kim expressed his sympathy for Gwangju several times. ``It was the hardest moment of my life. The case wasn't properly promoted. I thought I did all I could but it didn't work. It left so many people hurt and wounded,'' he said in interviews later on.

The article also tells us that, "It was officially tallied that 240 people were killed, with 409 missing and thousands injured." Those figures are certainly news to me, but I digress. Here are several photos of the Cardinal throughout his life. The first photo is of him when he was attending Dongsung Commercial School, about which more is said here:

Kim Sou-hwan was deeply distressed. The question on the test paper for an ethics class read, “Write down how you feel about becoming an honored citizen of an imperial state mandated by the Emperor.”

The year was 1940, during Japan’s colonial rule over Korea (1910-1945), and Kim was a senior at Dongsung Commercial School (now Dongsung High School) in Jongno, central Seoul.

Kim spent a good hour agonizing over the test item, until he finally wrote, “I am not a citizen of an imperial state. Thus, I don’t have anything to say.” After the examiners checked his paper, Kim was taken to the principal’s office, where he was clapped around the face and told he would never be a priest. He was too subversive, he was told.

It seems that a great many people are glad that the principal's prediction was wrong.

Ah, that bit in 1940 was a great story about the future cardinal, whom I alluded to long ago in this post about future popes. I guess one of the things that makes for a great activist pope (I'm speaking of Pope John Paul II) or cardinal (Cardinal Kim) is standing up to those in the employ of the Axis powers.