Busan through the years

[Update: William Broughton, the first westerner to visit Busan, is looked at here]

Over at Hunjangûi karûch'im, Antti has posted links to several sets of photos he's recently uploaded to flickr, including many photos taken in Busan two years ago. It reminded me of a handful I took there in 2001, from the Commodore Hotel (which can be seen in this photo): 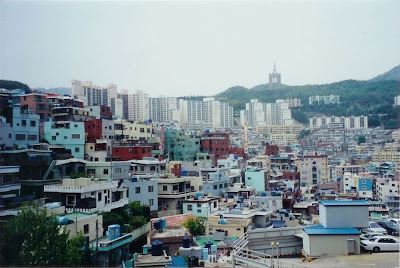 Looking Northeast, towards the harbor
It reminds me that I've actually only been there once, and that I really need to go back. With its colourful houses climbing the hills, it looks quite different from any other Korean city (though perhaps they've all been replaced with apartment blocks by now).

One of the things that is quite different about it is the fact that it was the site of a Japanese colony for about 200 years before the 1876 Treaty of Ganghwa. In this 1872 map, to the west of the island of Yeongdo, you can see the Choryang Waegwan (along with a small Korean settlement at the north end of the bay, and the walled town of Dongnae inland). This walled trading post was built in 1678 (with severe punishment meted out by the Joseon government to Koreans who dared enter it). More information about the Waegwan can be found at this site (with its many maps). The compound contained Yongdusan, which Busan Tower sits atop today. At the bottom of this map, you can see piers or breakwaters; perhaps that's what is seen below in a photo said to be taken January 16, 1876, as the Imperial Japanese Navy headed for Ganghwa-do to negotiate a treaty with Korea (it, and other pictures, came from here):

After the Treaty of Ganghwa, Busan was turned into one of the first treaty ports, and it was from this waegwan that the Japanese settlement in Busan began to spread. Of course, Japan's opening of the area into a trading port caused it to grow quickly as both Japanese and Koreans moved into the area. A 1912 map of the city is here, and a 1946 map is here.

To get a sense of the city's early development, here is a description of Busan in December 1883, by Percival Lowell in the book Choson, Land of the Morning Calm (which can be found here):

Turning still, the steamer suddenly brings into view a little knoll, at whose base are grouped some score of houses. They are not so far off but that a glance shows them to be not Korean, but Japanese. It is the Japanese colony of Fusan. It is in some respects a remarkable colony. In the first place, it is the only one that the Japanese have ever had. The spirit of trade — the great colonizing motive-power — is not a strong element in the Japanese character; the Chinese are the English of the far-East. Secondly, it is historic. For centuries it has been a bit of transplanted Japan. Ever since the invasion of the peninsula in 1592, the Japanese have held it almost without a break; it has been a little fortress by itself in an alien land. Yet, though it has lived amidst Korean manners and customs for so long, it has not been in the least affected by them: it is still Japan. Nor have the Koreans, in their turn, been leavened by it. The natives of the neighborhood, impelled a little by the desire to trade, and more by the curiosity for foreign sights, visit it by day, but they return at night to their own town. The only thing they have deigned to acquire has been some knowledge of the Japanese language; so that to-day interpreters from Korean into Japanese are either men from the neighborhood of Fusan or else returned refugees.

The Korean town of Pusan lies about two miles away, round the bay. When you learn to distinguish the thatched roofs of the houses from the brown of the withered grass, it can just be made out from the steamer's anchorage. From Fusan a road leads over the seaward slopes of the hills to it, and you are first made aware of its existence by seeing a procession of distant ghosts slowly winding their way along this path. The white dresses of the Koreans, and their slow decorous movements, lend themselves involuntarily to such spiritualistic hallucination.

It's interesting that he makes a distinction between Fusan (the Japanese settlement) and Pusan (the Korean settlement). They would, of course, merge as the years went by. As this recent essay* points out, the Japanese expanded their concession (which was not much larger than the waegwan) by asking for land for a graveyard (to the north), for a coaling station (on Yeongdo) and by reclaiming land. 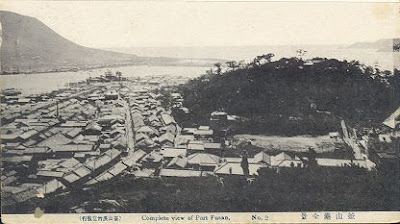 Looking South: Yeongdo, left, Yongdusan, right. Undated.
The Japanese population of Busan went from 80 in 1876, to 24,000 by 1910 (to, perhaps, 0 after 1945). Of course, Koreans returning from factories in northern Korea, from Japan, and from Manchuria would help take their place - as would the hundreds of thousands of refugees who streamed into Busan during the Korean War.

*Actually, the Autumn 2008 issue of Korea Journal, titled Colonial Modernity and the Making of Modern Korean Cities, has articles about Seoul, Busan, Daegu and Mokpo. They can all be read online.
Posted by matt at 8:39 AM

One thing I like about modern Pusan (I loathe the new NAKL system that renders it BOO-sahn) is the colorful pastels used to paint the homes along the slope facing the harbor.

That and the palm trees is a sign that Pusanites see for themselves a brighter path.

At least, that's my interpretation.

The old buldings on Yeongdo are still there. Apartment high rises are not replacing them yet.
Astonishing, there are not only first generation houses build with concrete stone but also from wood and clay. Bricks are also there. Here some buildings: Yeongdo architecture from my flickr stream