Hanging out with older men at Jongmyo Park

The abstract for an essay in the latest Korea Journal titled "Stigma, Lifestyle, and Self in Later Life: The Meaning and Paradox of Older Men’s Hang-Out Culture at Jongmyo Park" by Chung Gene-Woong can be found here (hat tip to Mark).

Fun tidbit: This photo reveals that there were still lots of houses in front of Jongmyo in 1945, though a small open area can be seen. It's likely the result of a fire break built (or demolished, really) by the Japanese in preparation for US firebombing during World War II. 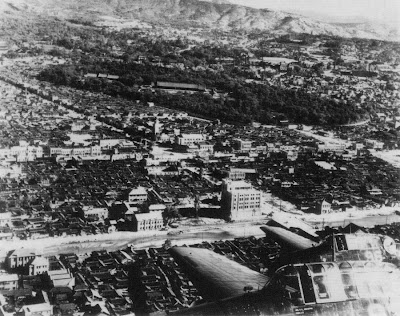 More on aerial photos, and a list (and a photo) of the fire breaks can be found here. I don't know when the park in front of Jongmyo was built, but it may be a part of the legacy of the fire breaks, much like the Seun Sangga.
Posted by matt at 9:02 AM

This is completely besides the point of the post or the Korea Times article, but is it just me, or does the phrasing "Korean-style chess" just sound non-PC? The "-style" just irks me for some reason even if it isn't meant to imply that janggi is any less of a game than chess.

This feeling is separate from the fact that the game (as far as I know) wasn't even invented in Korea. If anything I guess I would expect "Korean chess" or even "Korean-style Chinese chess" to be a more appropriate way to describe the game to an audience that is more likely to be familiar with (Western) chess.

Very interesting. I did not know about the fire breaks.