Off to the skating rink

[Update - via Brian in Jeollanam-do, we have this fine example of Kim Yu-na-inspired self-congratulatory 'our-minjok-share-the-same-pure-bloodline' nationalist drivel. "The miracles of economic development and democratization are embodied in the movements of Kim Yu-na," indeed.] 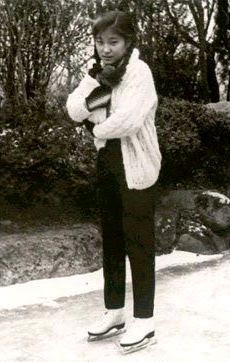 After winning the Four Continents championships on the weekend, the media is gushing about Kim Yu-na, and so is Roboseyo - go read his post about her. She's come a long way from these days (do go read that four-year-old article):

Yu-na can credit her success to her parents, who have spared no expense for her career. Her monthly training costs average more than 2 million won, which includes renting the Gwacheon ice rink and hiring instructors. When she takes part in an international competition, it’s at the family’s expense. But it is overseas training that truly costs a fortune. To create her program, Yu-na and her mother have gone abroad and paid huge sums to hire professionals such as choreographers.

Nowadays, as the Korea Times reports, Kim doesn't have to worry so much, seeing as

a rough tally of Kim's already sealed endorsements, sponsorships and cash prizes show that her total income this year will probably hover between eight to 10 billion won, more than double the amount she raked in last year.

It's nice to see that the effort and money she and her parents put into her training has paid off so well, and it's worth noting that she has donated millions of won to charity over the past few years, as noted here and here. A Chosun Ilbo article asks:

Why do businesses like Kim? A staffer with Cheil Worldwide said, "When things are difficult, people want to hear hopeful news. For example, Pak Se-ri drew attention in the financial crisis in 1997 and national football coach Guus Hiddink became popular during the credit card crisis in 2002. As gloomy news about the recession pour out, consumers are becoming frenzied about Kim as a symbol of hope."

They aren't the only ones. Yesterday former GNP leader Park Geun-hye posted a picture of herself as a child on skates on her Cyworld homepage (yes, that's her pictured above, not Kim Yu-na) and wrote about the hope and courage that Kim's victory has brought, like a new spring, to the nation. Even politicians/daughters of former dictators aren't immune from Kim Yu-na's power. I found another photo of her at Dongdaemun Ice Rink in the 1960s, along with her sister and her mother:


And just in case you thought having a skating rink next to city hall was a new idea, it's not: 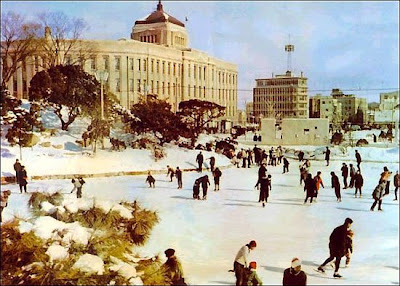 The rink is actually on the pond inside Deoksugung. For a decade or so in the '60s there was no high wall around that palace. Here's another view from 1958: 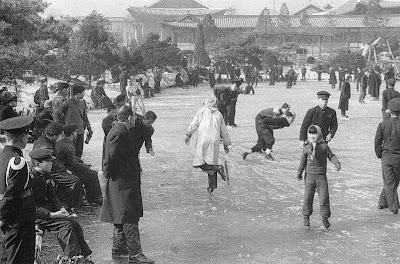 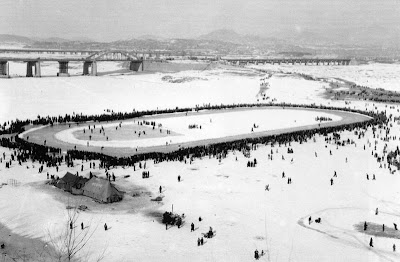 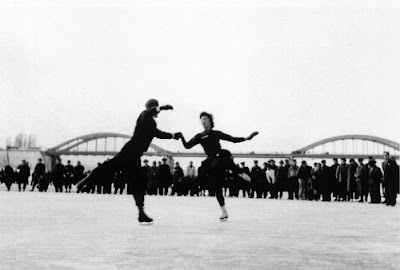 Last but not least is the ice-rink at Changgyeongung palace: 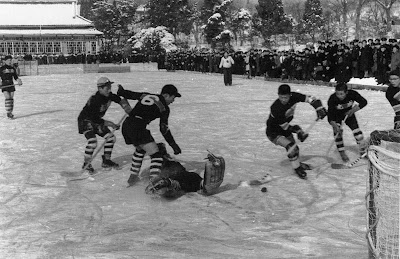 He shoots! He SCORES!!
Needless to say, the way palaces are treated has changed quite a bit (though of course Changgyeonggung had been turned into a zoo and park by the Japanese). The last four photos are from Seoul Through Pictures Volume 3; I'm not sure about the sources of the other two.
Posted by matt at 8:22 AM

:) thanks for the link love.