Shots echo through the internet

The shooting in Virginia reminds me of the flooding of New Orleans, in that it serves as a chance, in the media and blogosphere, to vent grieviances and point blaming fingers at those you disagree with. Of course, what gets lost in this is the tragedy itself. It seems one of the main arguing points in the US is over gun control, but since the killer was revealed to be Korean, the war of words in the comment sections of Korea blogs has been of a different nature. Very quickly, it has become a debate over Korean identity in both Korea and the US, and has taken a critical look at Korean society's reaction to the fact of the shooter's Korean identity. To see the 300-comment fisticuffs between current and former foreign residents of Korea and Koreans living in the US (mostly), do head over to the Marmot's post on all of this (and the comments section...if you dare). The Metropolitician has produced two posts which have stirred up some emotions, looking at aspects of Korean culture that can create difficulties for Korean men studying or living overseas, and the reaction of the Korean society to this event.

It was the reaction of Korean society (and the media in particular) that I was bracing myself for. Here's one of my 'favourites'. 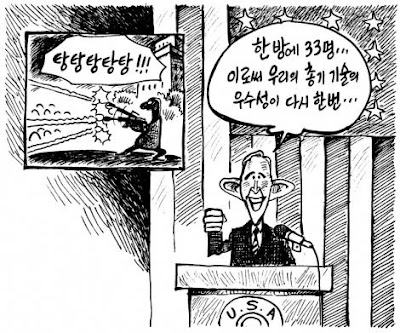 "In one bang, 33 people….This reconfirms the superiority of our gun technology."

This was posted at the Seoul Shinmun shortly before it became known that the shooter was Korean. Of course, it makes sense, seeing as there were so many American newspapers printing cartoons after the Daegu subway fire in early 2003 which joked about the "superiority of Korean gasoline." Right? More foot in mouth cartoons can be seen over at Occidentalism.

For those who have tired of the Korean media scapegoating foreigners, and "gusts of popular feeling" that follow negligible incidents involving foreigners (English Spectrum, the Swiss offside goal that wasn't, the tank accident in 2002, the speed skating incident, every altercation between a GI and taxi driver, and on and on and on), who are no fans of hypocrisy, and who (perhaps wisely) don't feel like wading through the Marmot's comment section, perhaps this comment is for you.

Speaking of media reaction, I enjoyed the following photo over at the Korea Herald:

"Korea University students pay a tribute to the victims
of the shooting rampage at Virginia Tech on Wednesday"
In a cynical mood, I wondered if this tribute was planned before or after the Korean identity of the killer became known. Then I wondered what those numbers on their chests were for. Then I saw this photo, taken at the same time: 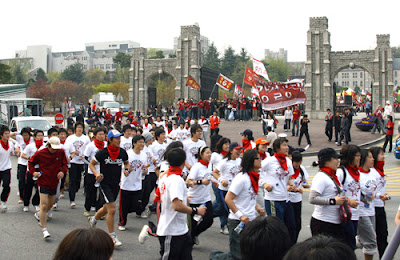 So seeing as the students were all outdoors in a large group, I guess it was a good time to pause for a few minutes and do their part to look concerned while the cameras snapped away so that Americans would go easier on their brethren in the US and Korea's image would look a bit better. The Korea Herald was happy to play along and not let anyone on to what the real purpose of the gathering was. Now, if they had planned to have a tribute to the victims before the Korean identity of the killer became known, then, whoops. Sorry. I hope that is the case, though hope and belief are two different things.

The Democracy Run above reminds us that today is the anniversary of another shooting, one I was reminded of in an odd way while looking into the shooting in Virginia. In this article, we're told that Cho Seung-hui lived in Chang-dong in Dobong-gu (up near Uijeongbu) prior to moving to the US. 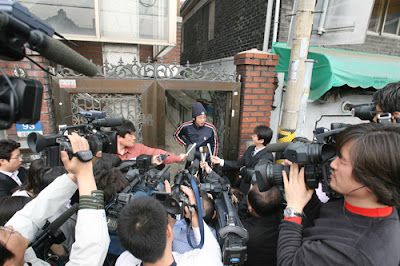 The media frenzy in front of the house where Cho grew up.
Curious as to where the neighbourhood was, I looked it up in my trusty map book and then glanced over to the left and saw the 4.19 cemetery, where victims of the 1960 April revolution are buried. Below, the large shape is Chang-dong, and the small one is the cemetery:


Some photos of the cemetery can be found here. 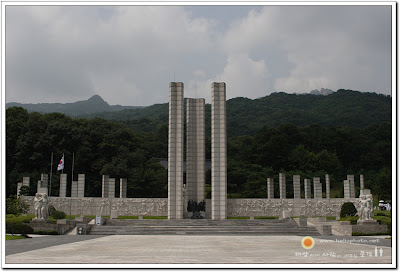 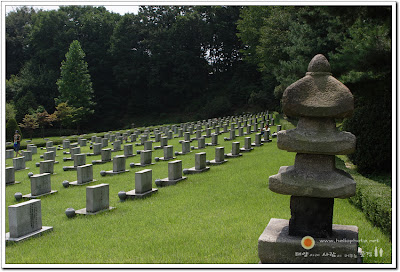 While hundreds of arguments are being waged by fingers tapping at keyboards over the shootings this week, this 47-year-old event caused a literal fist-fight at Seoul National University this past November.

The fight was over how the 4.19 uprising and the 1961.5.16 coup by Park Chung-hee would be named. A conservative group writing a new textbook wanted to call 4.19 a student movement, and 5.16 a revolution; leftists disagreed, and a fight broke out. The story can be read here, here, here, and here.

Hopefully people won't be fighting over the events of this week in 2054.
Posted by matt at 3:27 AM