Bucheon in the days of peach trees

Bucheon is the small city (of 800,000 people - maybe not so small) sandwiched between Seoul and Incheon on Seoul subway line one. During the Joseon dynasty much of what is now Bucheon was a part of Bupyeong-gun (county). Below is a map made in 1872, though if you're expecting a topographical map, I wouldn't scrutinize it too closely. Still, the large mountain at left is Gyeyangsan, while the river at the top is the Han. The stream running down through the middle is Gulpocheon, which empties into the Han near Gaehwasan, just west of Banghwa-dong. 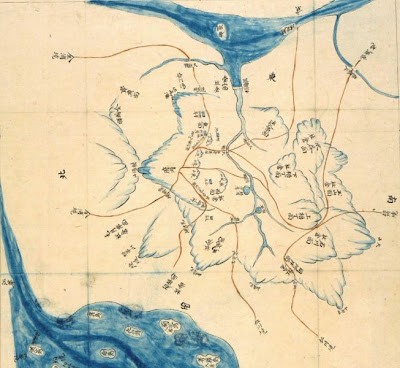 Despite this, the site I got it from is quite good. Just click on부평부지도 at left and a new window will open (works best in IE). On the right is a list of names in Hangeul with the Hanja next to them. Just click on a name and the program will zoom in to its spot on the map. You can look at any county in the country from that time (though I had to turn the map above sideways to make it face north).

At any rate, the Bucheon area first got put on a modern map in 1899 when Sosa was made a stop on the Gyeongin rail line, Korea's first railway, built between Seoul and Incheon. Sosa was known as the 'peach village' due to its peach orchards, and remained that way until the 1970s. In 1914 Bupyeong-gun was renamed Bucheon-gun during a reorganization of the county system by the Japanese. In the 1940s the Japanese planned an even larger reorganization, when it created the Gyeongin regional development plan, with the idea of establishing satellite cities which would stretch all the way from Incheon to Seoul. The plans ended with Japan's defeat (or did they...?). Below is a map of plan, with Seoul at top right: 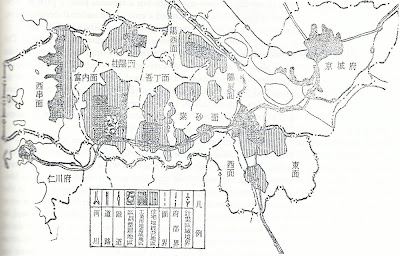 The aftermath of liberation led to, of course, the Korean war. During the aftermath of the Incheon landing, Sosa, which lay on the Seoul-Incheon highway, would see fighting take place around it in September of 1950.

[T]he 1st Marines had attacked east toward Yongdungp'o astride the Seoul highway. Its armored spearheads destroyed four enemy tanks early on the morning of the 17th. Then, from positions on high ground, three miles short of Sosa, a village halfway between Inch'on and Yongdungp'o, a regiment of the N.K. 18th Division checked the advance. At nightfall the Marine regiment dug in for the night a mile from Sosa.[...] 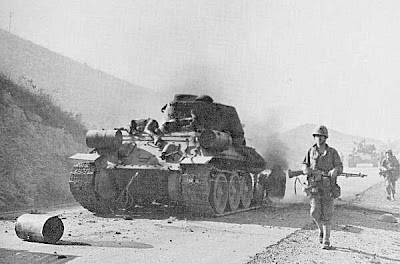 The tanks destroyed on September 17, 3 miles east of Sosa.

[T]he 1st Marines resumed the attack on the morning of the 18th and passed through and around the burning town of Sosa at midmorning. By noon the 3d Battalion had seized Hill 123, a mile east of the town and north of the highway. Enemy artillery fire there caused many casualties in the afternoon, but neither ground nor aerial observers could locate the enemy pieces firing from the southeast. Beyond Sosa the North Koreans had heavily mined the highway and on 19 September the tank spearheads stopped after mines damaged two tanks.

Despite the description of "the burning town of Sosa", it would seem that Sosa wasn't too badly damaged, judging by this picture I found taken on September 23, 1950.

During the war, the US military made maps of Korea, a number of which can be found online. 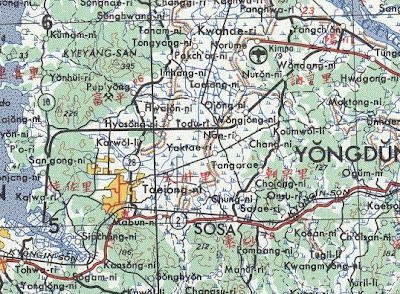 Above you can see the Seoul-Incheon highway in red, and judging by the large letters, Sosa was relatively important. What's interesting is that you can see several village names which survive to day, like Chung-ni, Ojong-ni, Yakdae-ri, and Nae-ri, which today are 'dongs' in Bucheon.

I originally thought of doing this post after finding a number of old photos of Bucheon on the city's website, but now they no longer work. Most can be found here and here, however. To start, here is a photo of Sosa station (now the massive Bucheon station shopping complex) back in the 1960s:

Here is a shot of Bucheon, then Sosa, in the 1960s, taken from Seongjusan, the mountain south of the station. As you can see, it's still little more than a large farming village. 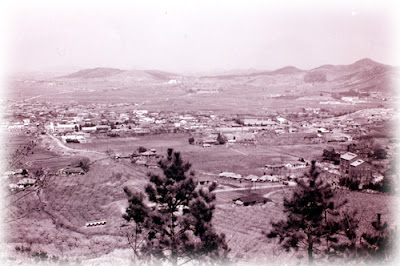 Below are four photos from Kim Ki-chan's book "Lost Landscapes", which I previously posted here. 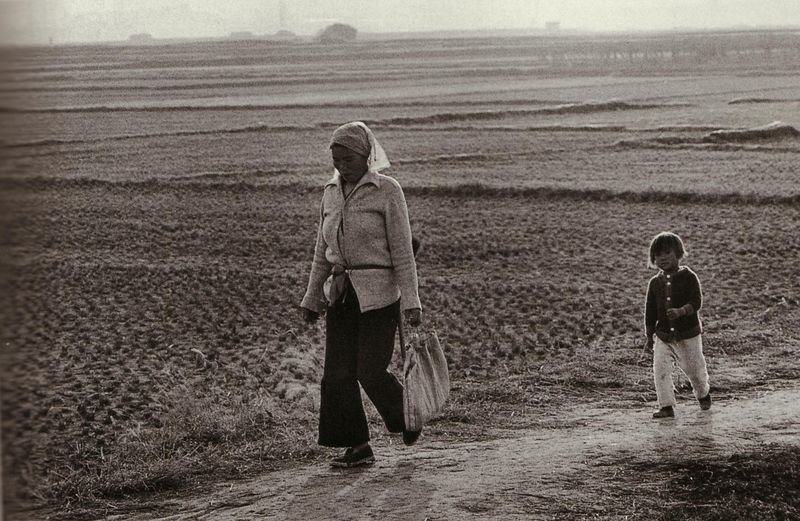 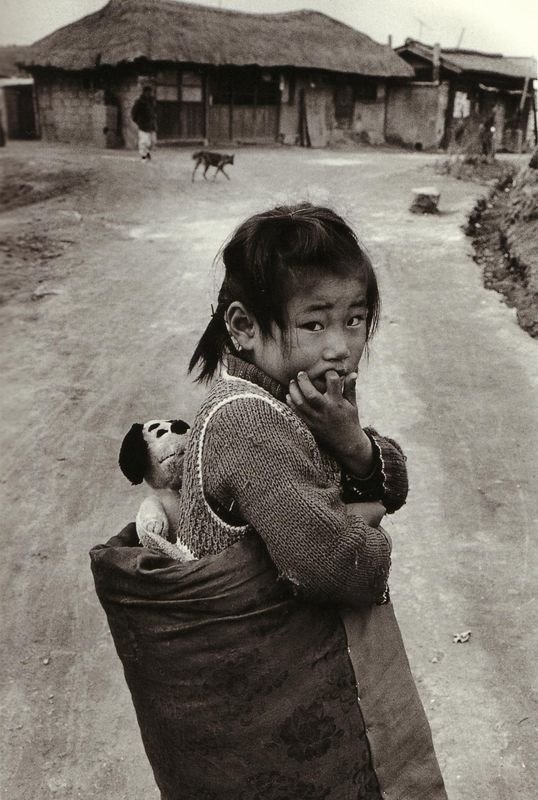 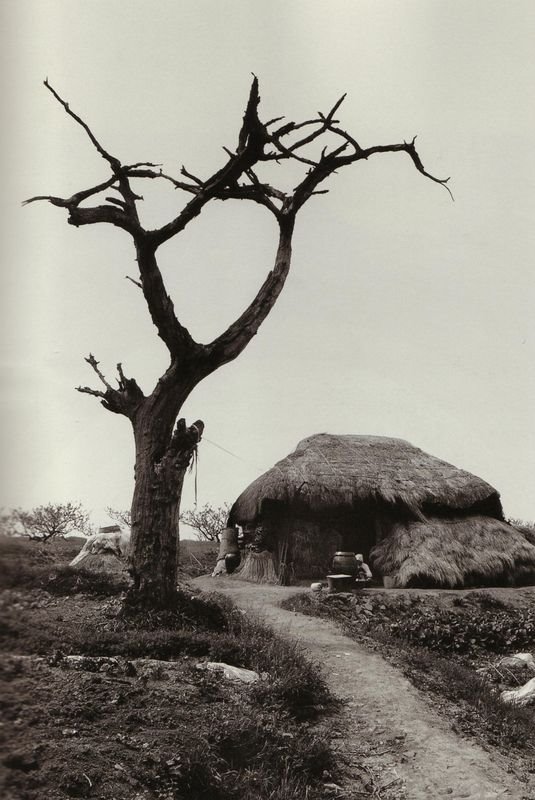 Here I found an undated photo of this man involved in a Dodang Gut. 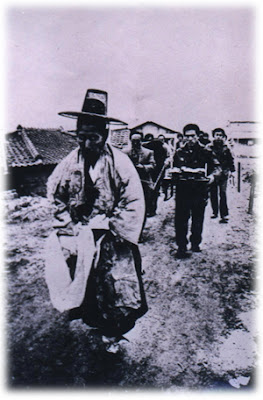 This ritual takes place every year, and last fall's was recorded here. This site describes some Bucheon-area folk traditions, as well as letting us know the origins of the area where the Gut takes place: 'The village name of Jangmal comes from a village clan named "Jang."'

Here's a photo of two women standing by a train line in Samjeong-dong (in northwestern Bucheon). 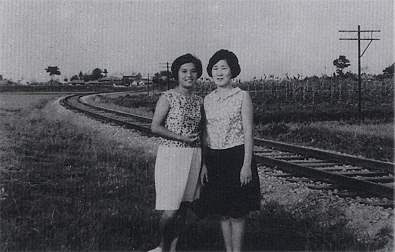 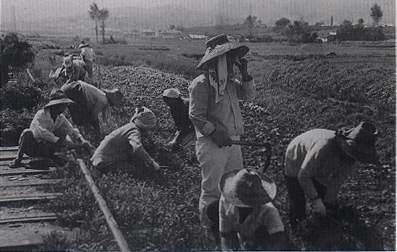 Above are photos of Jangmal-ri (top) and Ojeong-ri (Ojeong-ri can be seen on the map below).

The photos above are not of the Gyeongin train line, but of the Kimpo Line, which operated between 1951 and 1980 (or 1981). A 1975 map of the northern part of the line can be found here, while another map of the entire train network of Korea shows that the spur line to Kimpo originated from Sosa station. On looking at a current map of Bucheon, it became obvious which streets today were once the train line, though the midsection disappears in what is now the superimposed grid of Jung-dong new city. The 1953 map of Korea at the top of this post shows many of the rivers in the area, and reveal that the railway likely would have been built alongside the streams that ran through the farmland of what is now Jung-dong, as well as alongside what is now highway 6 (notice the post with "6" on it next to the road in the photo above). Obviously, having been built in 1951, the railway would have been built during the war to facilitate the movement of supplies to the airbase at Kimpo. In fact, I managed to find a photo of its construction: 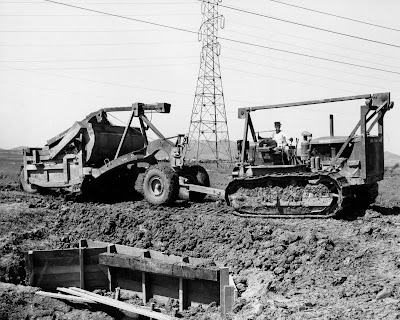 "Soldiers from the 453rd Engineer Construction Battalion operated a D08 bulldozer and carry-all, as he fills in drainage culvert on a railroad bed being constructed from Kimpo to Yongdung-po. 6 Jun 1951."

The likely path of the Kimpo line is marked below: 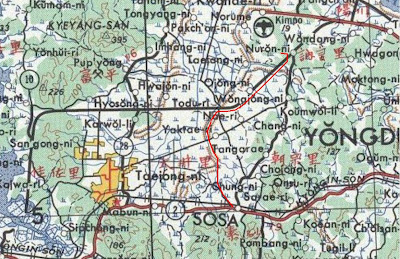 As well, here is a map showing the railway's path through modern Bucheon: 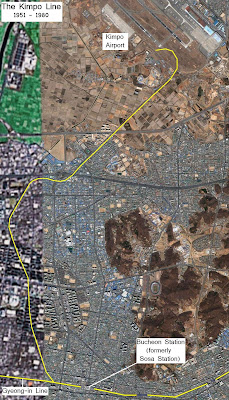 To become the crowded city it is today, Bucheon (then Sosa) began to expand east and west along the train line and north along the slopes of Wonmi-san (a friend told me that a taxi driver told him that 20 years ago there were still wild boars there). After losing bits of land to Seoul and Incheon in the early 1960s, Bucheon-gun was incorporated into a city in 1973. The picture below was taken north of Bucheon station on Jungangno, the street running north from the station. I have a hunch that the river below may now be under Neommal Gil, the street that runs from southeast (Sosa Station) to northwest (Jung-dong). The banner reads "Let's build a future city through the citizen new village (saemaeul) movement". The workers are likely students, as they're wearing student defence corps uniforms. 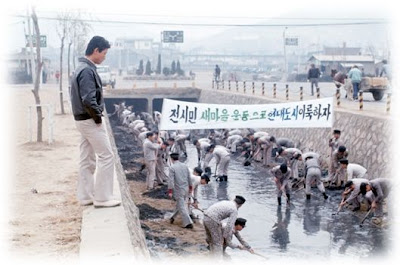 Below is what Bucheon looked like along the Gyeongin (Seoul to Incheon) Road, which runs south of Bucheon station, in the 1970s. 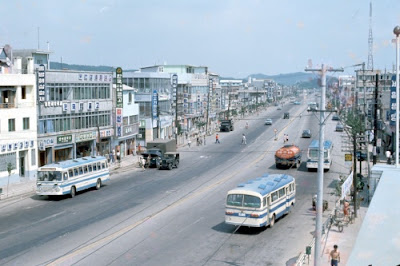 If we were to continue walking south up Seongjusan, we could turn face north and take in this view of Bucheon in 1981 (the dark smudge at top right is Gaehwasan, in Banghwa-dong). 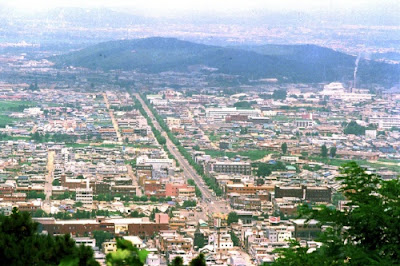 At that point, Bucheon had expanded less than a kilometer eastward from Bucheon station (at least near the train line), likely hemmed in by a river. To the west near present day Songnae station, this photo was taken (in Sang 3 ri, now Sang-dong). The Gyeongin rail line is in the distance. These fields likely disappeared around 15 years ago.


Behind that rail line is the Gyeong-in road, where this photo was taken in the 1970s. Bucheon was once famous for its peaches, and is still known (in its tourist material and in the name of a cultural center) as Boksagol (Peach Village). The peach trees are long since gone. 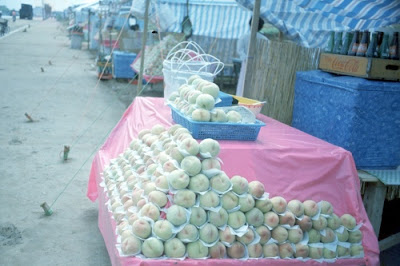 An undated shot of a 'free market' within the city: 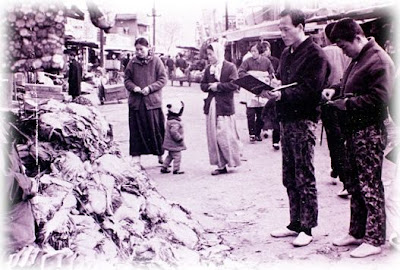 The banner below is helpful, telling us it was shot in Simgok-dong in 1986 (the neighbourhood just north of the tracks near Bucheon station. 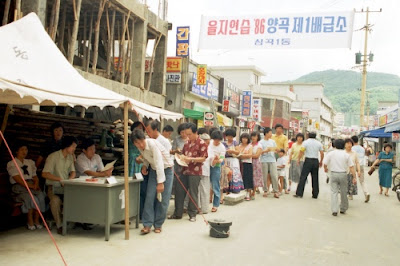 I imagine the reason Bucheon had not expanded westward was because an administrative decision had been made not to expand past a certain stream (if you look at this map of Bucheon, the Jung-dong development's curved eastern edge should be clear). That same outline of Jung-dong can be seen below, not as the outline of a development, but as the edge of the city. This photo was likely taken in the mid 1980s, when Bucheon would have been reaching as far north as the Gyeongin Expressway (in the1988 documentary "Sanggye-dong Olympics", the residents evicted from Sanggye-dong buy land next to the expressway in Bucheon, where only fields can be seen). This photo is taken above Wonmisan, and looks west. The bare patch of land in the center of the photo is where the Bucheon stadium is today.

Much of the built up area to the right in the picture above is made up of factories, which began to appear with increasing speed in the mid-to-late 1970s. The industrialization of Bucheon reflected the modernization of Korea as a whole, of course. It's location, sandwiched between the port of Incheon and the capitol made it an ideal spot for such growth, and this is what sent urban Bucheon sprawling northwards (even now, much of the kilometer-wide strip running alongside the mountains is made up of factories). 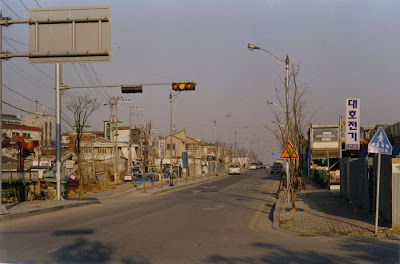 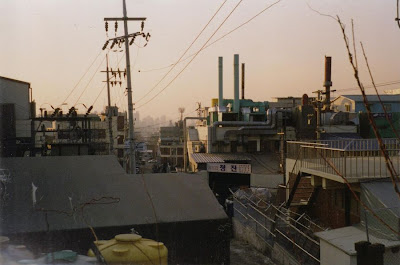 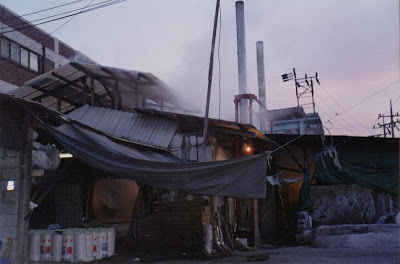 Above are photos I took in eastern Bucheon in 2002. Most of the factories are small or middle-sized, and since the 1990s have been employing more and more migrant workers. As Bucheon grew, it would begin to allow the buildings of apartments (the first complex appeared in 1982). Of course, it was Seoul's need to find new spaces to house its overflowing population that would see Bucheon change drastically into the city it is today. I'll leave that story for another day.

What an incredible overview of Bucheon. I live here now and recognize many of the locations pictured, and I can't believe they once looked like that. Sadder still, the day of the 20-story apartment in Bucheon seems to be coming to a close as all the new apartments going up, most famously the We've The State complex in Jung-dong, are as tall as 30 stories. Have a look at some pictures I've taken of Wonmi-dong (http://paintroller.blogspot.com/2007/04/bucheon-city-wonmi-dong.html) and of Bucheon in the round (http://paintroller.blogspot.com/2007/03/day-in-bucheon.html), focusing a bit on the construction of the line 7 extension.

Why do you put white type on a black background?
It ruins your information.

you may have already seen it, or not be interested in it, but i thought this site might be of interest to you:
http://blog.jinbo.net/manic/

If you're not aware of it you might be interested in reading Yang Gui-ja's 원미동 사람들. It's been translated into English as "A Distant and Beuatiful Place" and came out on U Hawai'i Press a few years ago--very good short stories about Bucheon in the '80s.

Joe - Nice pics; they inspired my taking an interest in Bucheon again.

hardy - Is it that difficult to read? I like white on black....

Stephen - thanks for that information, I wasn't aware of the book. It's definitely on my 'to read' list now. Someone should convince Kyobo bookstore in Bucheon to order a few copies...

Great Post! So interesting to these old pictures. It helps put my neighborhood in perspective.

I lived in Bucheon in 2006. I live in Guri now. I have yet to visit Bucheon since leaving. I haven't found the time. Korea changed so much so quickly during the 1980s and 1990s.