Are violent Korean films to blame?

Apparently the film Oldboy is being blamed for Cho Seung-hui's killings, based on the fact he holds a hammer in one of the photos that was released today. This blogger thought Oldboy might be responsible before the photos were released, and while some may say that it might be hard to judge Oldboy having walked out after 10 minutes, he may well be on to something when he talks about "awfully violent" Korean movies and the effect they may have had. He later writes that "Not all South Korean films are quite so carnage-filled". If only this were true! Even many light-hearted movies, some set in schools, during the Chosun Dynasty, or even during the Korean War feature a great deal of casual violence, and though he refers to Kim Ki-duk's "Spring Summer Fall Winter and Spring" as not being violent, it should be noted that it is one of the least violent of his films, most of which are very disturbing.

To show how disturbing even Korean comedies can be, perhaps "My Sassy Girl", the top comedy hit of 2001 in Korea, and the best-selling comedy in there until that point, will provide a rather shocking example.

The film essentially consists of a woman berating, manipulating and repeatedly hitting the fool who loves her for the entire movie. 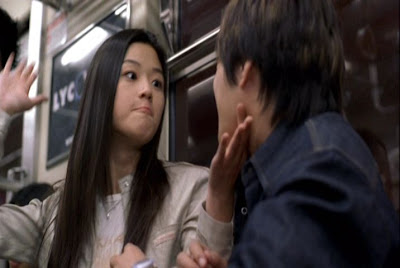 And believe it or not, the words that come out of her mouth most often during this movie are "Wanna die?" But that's not the only reason this film is suspect and cause for concern. This "comedy", you see, turns much darker. 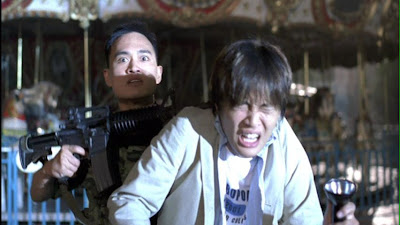 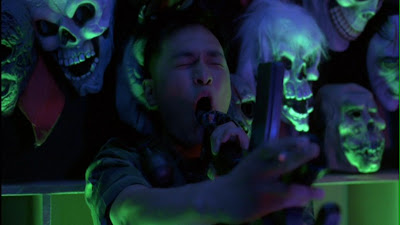 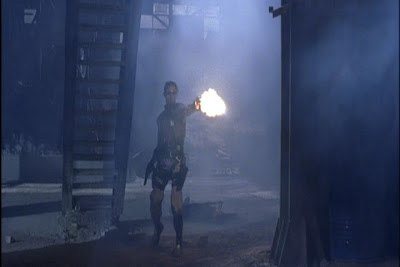 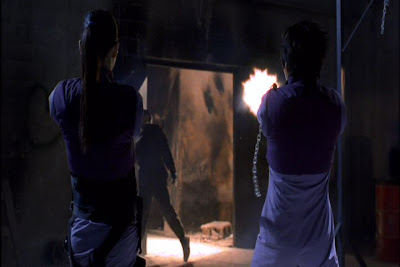 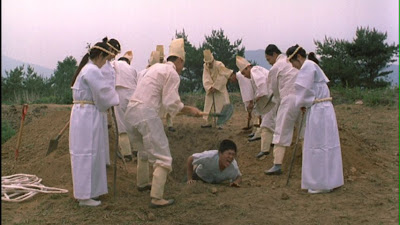 In the last scene above, a boy is buried alive. I'm not joking. The people are hitting him with shovels so that they can keep him still long enough to bury him. And this is a romantic comedy. Let that sink in. Not only that, it was popular throughout Asia, and also among Asian-Americans. It's entirely likely that Cho saw this film, with its recurring death motifs, gunplay and suicide attempts. It may well have played a part in what led to what happened on Monday. And this is just one movie.

It should be kept in mind that there are many disturbing movies produced in Korea, such as the hit "Friend", which features stabbings, while hits "Silmido" and "Taegukki" feature a great deal of gunplay. Other hits like "The Host" feature the use of molotov cocktails, guns, and bows and arrows, while in "The King and Clown", a man's eyes are burned out. Most chillingly, "A Tale of Two Sisters" chronicles a girl's descent into madness. Could it possibly have set Cho off? Could any of these movies? Could another person who has watched any one of them be a ticking time bomb? The threat of this occurring outside of Korea is very real. Rampant illegal downloading makes these films available to anyone with a computer. If someone you know brings up one of these movies in conversation, keeping an eye on them may save lives.

I don't want to try to predict too much, but I'm sure that when studies are done, it will be concluded that by not watching Korean films, you will be at least 20% safer.
Posted by matt at 4:15 AM

You are joking, right?

And by not watching Kim Ki-duk's films, you'll be at least 20% less bad person. And here I'm not only joking, I felt like becoming a worse person when translating a bit too many of Kim's pieces. I developed some sort of a mental defense mechanism that has made me almost forget what Kim K-d films I've done...

Antti - Actually, the first Korean film I ever saw was Kim Ki-duk's Bad Guy. It left quite an impresssion.

And I deleted this comment by Starmaker, not because he/she didn't get the joke, but because he/she cut and pasted incoherent rambling the length of an average country's constitution. The unpasted bit read
" The only way to eradicate the Hollywood virus is for the members of the family of the
32 people who were killed *and* Cho Seung-Hui family members, in the worst shooting rampage in modern U.S. history,
is for those family members to file a class action suit against all the major studios that put out this stuff.

Whew. I hated to have to ask, but there are people who wouldn't have been.

whoa, for a second there I thought you were serious...honestly though, it wasn't unpredictable, this backlash against violence in media. Forget the fact that you can buy a gun practically ANYWHERE in the US, just blame films, even if we're not sure if Cho actually watched them!

Yes, there are some violent Korean films, though I do not think there are alone in this: