George Foulk and the 1883 Mission to the US 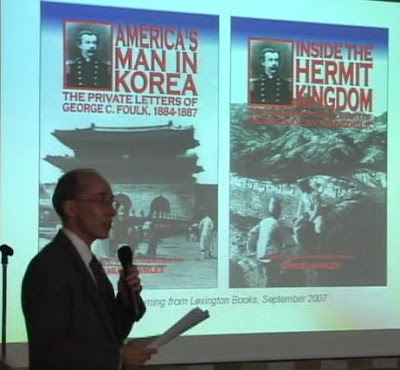 Over at korea.com, the Royal Asiatic Society finally has the video of a lecture that I've wanted to see since late January: Samuel Hawley presenting "America’s Man in Korea in the 1880s: The Travels and Tribulations of George C. Foulk", which details the life of one of the first westerners to travel throughout Korea and learn Korean as Korea was opening to the west for the first time. The video can be downloaded here.

Foulk first made contact with Koreans when he was assigned as one of two escort officers to the Korean special mission to the US in 1883.

In June 1883, King Kojong appointed Min Young Ik the first Korean ambassador to the United States. Hong Young Sik, Suh Kwang Bum, and other progressive officials were assigned to the Korean mission in Washington. The first Korean diplomatic mission to America sailed on an American ship, carrying years' supply of Korean foods - kimchee, hot bean-pastes, dried fish, rice, and so on. They brought their own cooks who prepared Korean dishes during the month-long voyage to America. 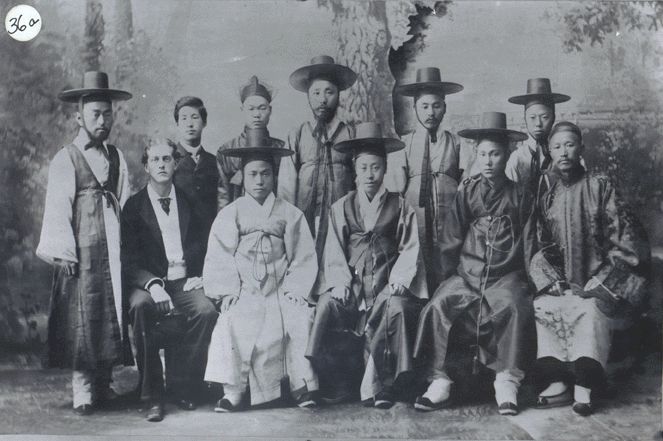 Pictured above is the special mission in the US. The westerner at left is not Foulk, but Percival Lowell, who had lived in Japan for some time before being asked to join the special mission as foreign secretary. The mission arrived in San Francisco on September 2, 1883, and arrived in New York on September 18, 1883, where they met president Chester A. Arthur in a hotel to submit the King’s letter and diplomatic credentials. 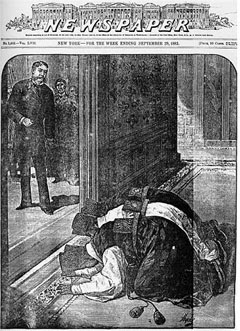 Meeting the president in New York
From there they went to Boston, where they visited two industrial fairs, and toured other cities in New England, as well as Washington. They also made contact with an employee of Thomas Edison, who would receive the contract to wire some of the palaces in Seoul with electricity. They toured the Smithsonian Institution, farms, a textile plant, a pharmaceutical company, a naval yard, an electric power plant, and WestPoint Military Academy. One of the Korean members of the mission remained behind to study in the US.

This page has a good summary of Foulk's life, and explains his involvement in Korea, as does Tyler Dennett's "Early American Policy in Korea, 1883-7", from Political Science Quarterly, Vol. 38, No. 1. (Mar., 1923), scans of which can be downloaded here (the download 'button' is at bottom left, you have to wait 12 seconds). Interesting to note is that even in 1923 the US was being blamed for abandoning Korea to Japan, a view Dennett sets out to correct. Both essays are used as sources below:

At the end of the visit, President Chester Arthur authorized three of the diplomats to sail back to Korea in a newly refitted American warship that was preparing for service in the Pacific. The president also designated Foulk as escort officer for the Korean delegation during the voyage. Before the ship sailed [...] the president expanded Foulk's duties and appointed him as naval attaché to Korea.

The embassy, escorted by Foulk, sailed from New York on the return voyage on the U.S.S. Trenton, Dec. 1, 1883. Another section of the Embassy, under the care of Percival Lowell had already started for San Francisco where it embarked in a passenger ship. The Trenton stopped at Marseilles, allowing the party to make brief visits to Paris and London, and then proceeded by way of the Suez Canal.

Foulk and the three Korean diplomats lived together in close quarters for five months while the ship sailed through European waters and Suez to Asia. The young naval officer used this opportunity to enhance personal relationships with the Korean officials and to learn their language. By the time the ship arrived in the harbor of Chemul'po (the modern city of Inchon), Foulk had developed a considerable capability to converse in Korean, and he had also developed a deep understanding of the political intrigues of the Korean court.

The party arrived at Seoul on June 7, 1884. Percival Lowell had arrived in Korea the previous December with the rest of the mission, and as a reward for his efforts, Lowell was invited to
visit and spent three months there that winter. As I wrote here, he would publish Choson, Land of the Morning Calm: A Sketch of Korea in 1886. He also wrote about the 1884 coup d'etat in the November 1886 issue of The Atlantic Monthly (which can be found here) though it's obvious that he takes the Japanese point of view at face value (he was living in Japan then, not in Korea) and Dennett in the essay above describes the essay as "evidently based on contemporaryJapanese explanations of the affair, and [...] not very trustworthy". Still, there are some interesting tidbits:

With Min [Yong-ik] came home another of the chief promoters of the progressionist party, Syo Kwang Pom. Min himself was a young man of pleasing manners and gracious address, still in the early twenties, whose ruling idea was to see everything and be seen by everybody in truly princely fashion. He had been court favorite at home, and while abroad had fairly reveled in the honors and delights of diplomatic traveling. He spent a few days in Paris, on his journey back, and there, through a happy adaptability of his name, had been felicitously known as Mignon.

As soon [...] as he reached home, he set himself to organize what he was pleased to call a militia. For this purpose, he caused to assemble in Seoul members of the peddlers and hucksters guilds to the number of several thousands. These guilds are made up of men from the lowest classes of the people, and the particular specimens selected for the new militia were no better than the refuse of the populace.

What's interesting about the peddler guilds is that they were used by the conservatives in 1898 to attack the protests of the progressive movement (at which time Syngman Rhee was imprisoned). Foulk at this time traveled about the country, and it was during his second trip, arranged by Min Yong-ik, that the progressives, many of whom had been a part of the Special Mission to the US or had studied in Japan, struck, with a little help from the Japanese. During the opening of the first post office (more on that here), they set a fire, hoping to draw out their targets, including Min Yong-ik, who was slashed with a sword several times. As Lowell tells us,

the progressionist leaders, pretending to be terribly startled and very much alarmed for the safety of the king, proceeded as fast as they could to the palace. On the way they gave vent to expressions of the deepest regret for what had happened to Min Yong Ik, which were the more sincere on their part inasmuch as, instead of killing him, as they had intended, the would-be assassins had botched their work, and had succeeded only in badly wounding their victim.

Hawley, in the lecture, reads graphic, and unpleasant, descriptions of Min's wounds. At this point another foreigner came to prominence: Horace Allen.

Dr. Allen arrived in Korea in September 1884 and became the first American missionary in Korea. He was also the medical officer at the US foreign affairs mission in Seoul. Most importantly, he became the King's personal physician and confidante due to an unusual incident. On December 4, 1884, Prince Min Young Ik was seriously injured in an assassination plot at a location near Dr. Allen's place of residence.

Upon hearing the commotion, Dr. Allen rushed to the scene to find a man bleeding to death. He administered an emergency care and the man lived. The man was Prince Min, the designated ambassador to the United States and a nephew of Queen Min. The grateful king made Dr. Allen the royal physician.

While Allen and Lowell's fortunes would continue to climb, Foulk's did not. Again, the story of his years in Korea is told here. From the descriptions of Foulk's letters and travel journals during Hawley's presentation, the books compiling these letters and journal, which will be published later this year, should prove fascinating.
Posted by matt at 4:14 AM