'The Bulldozer' and the Middle East Boom 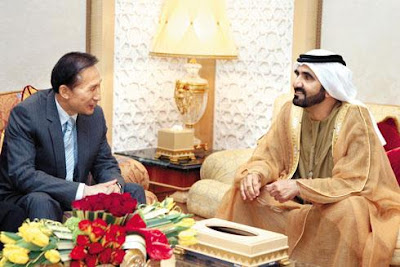 Lee Myung-bak on Tuesday said Korea should ignite “a second Middle East boom” to achieve economic growth through creative leadership. Lee, who is in Dubai, told reporters that the first Middle East boom helped Korea overcome the oil shock in the 1970s, a time when he was the chairman of Hyundai Engineering and Construction.

Nice, the way he inserts himself into that bit of economic history there. I do wonder if by "creative leadership" he means something other than throwing taxpayers' money at construction companies. Perhaps he's stumbled onto a new leadership style, and abandoned the old 'bulldozer' methods?

As a way to kindle a second Middle East boom, he proposed attracting oil money from the Gulf to massive development projects in Korea’s Gyeongsang and Jeolla Provinces, and to encourage Korean companies to undertake yet more plant construction in the Middle East.

I guess not. Those "massive development projects" he's referring to, of course, are those canal plans of his, one linking Seoul and Busan, and another linking the Yeongsan and Geum rivers. I guess someone's got to help feed those poor, starving construction companies.

While in the United Arab Emirates, he met with

Dubai ruler Sheik Mohammed bin Rashid al-Maktoum who is largely credited for the Dubai “miracle.” Lee said that he will ask the Dubai ruler to take an interest in Korea, adding he and the sheik have something in common as “globally renowned CEOs.”

Why, in the Korean media, does 'economic miracle' rarely appear in quotation marks when it's in reference to Korea, but is hemmed in by them when in reference to Dubai? But I digress. I wonder if Lee will be visiting the construction site of Burj Dubai, set to become the world's tallest building? 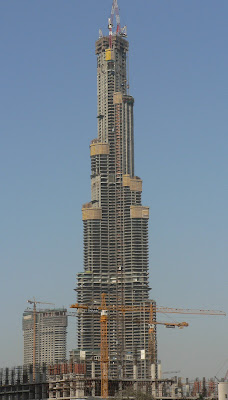 Burj Dubai, taken April 7, 2007
The main contractor is Samsung, after all, and they must be having a blast working in a country that bans labor unions, even if this leads to some labor unrest from time to time ( if there's one thing Korean Chaebol are good at, it's dealing with labor strife, though I'm not sure if they can import Korean gangsters to work on Middle East construction sites).

This is quite a high profile project, and is a far cry from the modest projects Korean companies began with in the Middle East more than 30 years ago. For those interested in the history of Korean construction companies operating overseas, and especially in the Middle East boom, then Kim Sooyong's 1988 essay "The Korean Construction Industry as an Exporter of Services" from World Bank Economic Review, vol. 2(2) is just for you. The entire issue of that journal can be read as a pdf (The essay is on page 225) or as a text file (scroll waaay down). Just to give an overview, here are a few quotes: 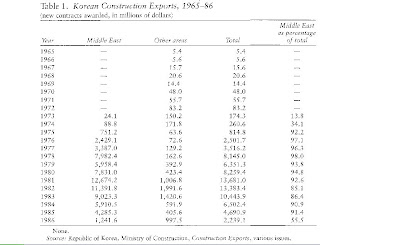 (Click to enlarge)
The essay examines the rise and fall of Korea's construction endeavours in the Middle East (at least prior to 1988), as well as the government policies that accompanied (and encouraged) them. It's well worth a read. I'm just curious how much Hyundai (and Lee Myung-bak) had to do with that boom. Was he really that big of a player, or is he just invoking those days to remind everyone of the economic growth of the gold old days back when Park Chung-hee ran the country?
Posted by matt at 4:42 AM