On April 6, Newsis reported on the slow rate of progress in implementing the changes brought by the revision of the hagwon law last year, such as reducing the range of additional tuition fees, dealing with 'hakparazzi,' (people who rat out hagwons which break the rules) registering changes to tuition and verifiying foreign instructors. Guess which one of those things it highlighted?

[...]According to SMOE on the 6th currently only 9.26% of foreign instructors working in Seoul area hagwons have been verified.

The amendment specifies that when hagwons hire foreign instructors they should confirm they are not illegal sojourners via additional verification such as criminal record checks, health checks, degree confirmation, passport, visa, and alien registration cards.

However, in the case of the Seongbuk office of education (Gangbuk and Seongbuk-gu), out of 152 foreign instructors, only 8 or 5.26% have gone ahead which is the lowest rate.

A SMOE official explained that "There was a grace period until January, though even now verification by area offices of education is continuing." "However, in the case of some foreigners, they have faced delays in their home countries issuing the necessary documents for verification because it is somewhat time-consuming."

I guess there's no need for SMOE (or Newsis - I can't be sure where the fault lies) to mention the fact that most foreign English instructors are already verified by the exact same documents needed for the E-2 visa, and that the only group of teachers who need to be verified are non E-2 visa holders. As mentioned in this post, KBS reported that

there are 15,400 native speaking instructors at hagwons in Korea. Among these, 10% or 1,500 people are overseas Korean F-4 visa holders who do not need to submit criminal record checks which include a drug test certificate.

So the honest way to put it would be that at least 90% of hagwon instructors are 'verified' already - it's just that an idiotic duplication of effort required by the MoE is "somewhat time-consuming."

The Kookmin Ilbo also reported on this, and had a similar headline. I tried to see if SMOE had made a public announcement about this on its site, but found nothing (except this anti-foreign teacher rant posted to the bulletin board. Yes, I'll translate it later.)


At Waygook.org, someone posted a link to this EPIK newsletter and seemed confused that EPIK "hiring is going up...at least it did this past March and looks to be heading so in Fall 2012 too." How someone could make such a claim from this blurb, I'm not really sure. 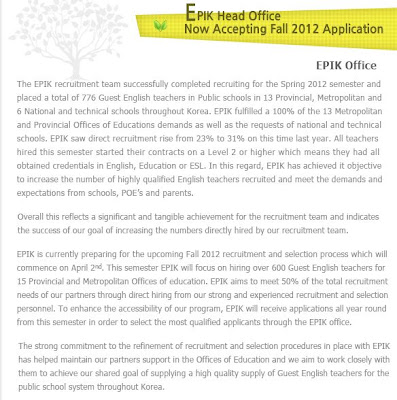 So, that means, compared to last year, there were almost a 1/4 less teachers for this year's spring intake of EPIK teachers, and there will be 1/3 less for the fall intake, and that will be for 2 more offices of education and EPIK is aiming to meet 50% of the 15 offices of education's needs.

While I'm sure the more than 400 teachers being cut by SMOE (who EPIK has been recruiting for since 2010) has played a part, it's impossible to know (from its newsletters) just what other cuts are being to NSETs. But this doesn't seem like reassuring news for native speaking teachers working in Korean public schools.

Or for English native speakers, at any rate. What I will say is that doing a search for 'native speaker' on Naver now, instead of turning up mostly English speaking native speaker news, turns up Chinese native speaker news. I'll let the reader decide if what this March 28 Newsis article has to report is of consequence: The Ministry of Education, Science and Technology plans to hire 200 Chinese native speaking teachers for CPIK (Chinese Program in Korea) this year (and has already hired 140 so far) and place them in schools under the jurisdiction of 12 city and provincial offices of education.

Seeing as they are on E-2 visas, I wonder how strictly the drug and HIV tests will be enforced for them. I'd be very curious to know, in fact.
Posted by matt at 3:49 PM

I wonder if learning Chinese will be seen as more important than learning English, over time.

Re: the 'hakparazzi' - I'm surprised the Korean authorities aren't reaching out to the thousands of NET's and tens of thousands of KET's who would know about a hagwon's shady dealings...