The 2003 post that tarred foreign English teachers as child molesters

Perhaps the post should be titled "The 2003 post that was used to tar foreign English teachers as child molesters by Anti English Spectrum and the Korean media." But that's kind of long, right? At any rate, this series began with a look at the site English Spectrum before the incident began, and this post will look at one other key piece of the puzzle.

The 12th post (ever) at Anti English Spectrum (which can still be read today here (first result)), was posted at about 9am on January 13, 2005, and is titled "Some English instructor bastard's guide to hitting on Korean children - found by chance." It lists two links (now dead):

Here is the English version of the post (click photo to read - or open in it a new tab if Firefox automatically opens it in a photo viewer): 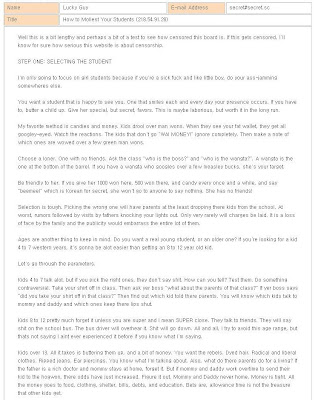 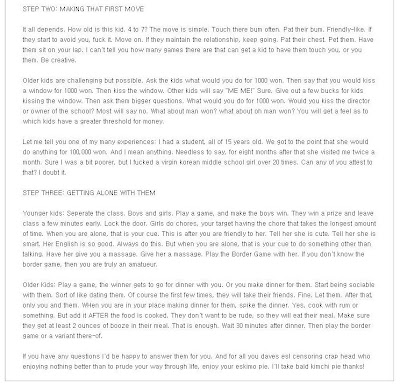 To be clear, that was originally posted on July 11, 2003. The translation was widely passed around Korean cyberspace, and hundreds of Koreans left angry messages at the site. What was never translated were the messages left in response to the original by (presumably) other foreign teachers in July 2003. I dug through the hundreds of messages back in 2007 and saved those original responses:

Prove I did any of this stuff.

[The Webmaster above kept his word - what followed was, indeed, a translation into Korean - the same one linked to by Anti English Spectrum a year and a half almost to the day later. It had since been deleted.]

Well this is a bit lengthy and perhaps a bit of a test to see how censored this board is. If this gets censored, I'll know for sure how serious this website is about censorship.

Let's read the first fucking two sentences before we all start looking for a boogy man that doesnt even exist!

I congratulate you...I am very impressed with your attempts at causing people to be disgusted with your posting. I however don't care either way...I know Korea and I understand Koreans. My guess is that you are full of shit...If it was real then you would have been caught for sure...One word from a child to a mother and ohhh yes they do tell everything and you would not have had the time to write this posting. You would be somebody's Biaaatch in prison..But if you get off on this then hey what can we do...Good luck I pity you though...Having to look over my shoulder every time I see a police officer must be a stressful thing..
_________________________________________

I know that you want to keep this form unmoderated, but sometimes you need to make an exception. How you could leave a thread like this up is beyond me, let alone appear on the index page of your site.

If I were an employer, I would never advertise here again after seeing some of the junk that appears on this page. Thank goodness, I am getting out of this country in 2 weeks. I won't ever have to be associated with these kind of lowlifes again.

Bruce says it all. And that is the whole point of my post. Censorship needs to be applied in certain circumstances. Let's read the very first sentence of the post again shall we?

Sheesh. Another poster was right. If anyone did something as disgustingly described here they'd be behind iron bars in no short time.

Go find the real pervs and stop wasting your time running around tracing IP's. I would have used a anonymous proxy had the intent of it was really to provide some sick guide.

you must be doing your phd in psychology or something. pretty amazing, seems like you know the exact buttons to push - how did you gain such amazing insight into the human condition? nice one, however you figured it out. You definitely managed to show that people find paedophilia disgusting, against all people's expectations. Can i be part of your next study?!!!

shut ur fucking mouth and go to hell..

One question that could be asked is whether 'lucky guy' did or did not write that post, and whether he was actually just testing the no censorship policy of the Korean ESL site. While westerners can do dumb things here (like, say, mail yourself a kilo of hash) because they think the rules don't apply to them (or for many other reasons), I think I'd tend to agree with this 2005 assessment of the post:

[I]t was initially surprising to me that so many Koreans would believe that this was a real how-to from a child molester. Disgusting as it was, it reads like something someone would write in order to be purposefully inflammatory...those engaging in real discussions of illegal activities tend to be a lot more subtle in their language.

At any rate, regarding the final posting from January 13, 2005 ("Your site is going down"), seeing this - 凸^0^凸 - we would have no reason to doubt that this was a netizen who meant business. To be sure, he followed through on his threat, and by 9am that day the post was copied at Anti English Spectrum, after sitting translated but unnoticed for a year and a half at Korean ESL. The next day [January 14, 2005], the negative things associated with foreign English teachers would expand from 'comments denigrating Korean women' [January 11] and 'photos of a secret sex party with Korean women' [January 13] to 'child molesters.'
Posted by matt at 2:31 PM

You've outdone yourself going through all these old posts.