At 9AM on January 14, twenty four hours after it was posted at Anti-English Spectrum, My Daily reported on the netizen reaction to the "How to Mollest [sic] Your Students" post originally posted at Korean ESL a year and a half earlier: 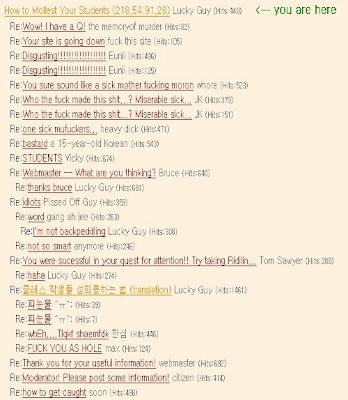 Another shock has been received following the recent controversy over the denigration of Korean women. A description of how to molest children and students in class has been made public and spread from the foreign instructor forum of another site which promotes friendship between foreign language instructors and the exchange of information about overseas studying.

The post spread from the site is divided into sections explaining in detail, step by step, how to choose the child, approach them, and how to get alone with them.

The posting is quite shocking, giving concrete instructions in how to approach students. "Children aged 4-7 are easier to approach than those aged 8-12. Pay attention to the children who cheer at your fat wallet. Choose lonely children. Be kind to them and sometimes give them money or candy and tell them it's 'secret.'"

Giving the impression of encouraging a crime, he says, "When you invite them to dinner, put alcohol in the food." "Korean children will not want to be rude, and they will eat the food."

Shockingly, he also wrote of his experiences. "Now I know a student who's only 15. We got to the point that she would do anything I said for 100,000 won. Needless to say, for eight months after that she came over twice a month. I had sex with a virgin korean middle school girl over 20 times. You won't find anyone else who has done that."

Netizens who saw this are saying, "It's scary - I won't send [my kids] to a hagwon." "It's such a serious problem, and measures are needed."

Whether this was written by a foreigner or not has not been determined, but it's being asserted that unconditionally foul language and slander is not an answer to the recent, continuous, red-faced stir over foreign instructors, and that there is a need to take measures to make certain these sites stir up no further trouble.

As to what kind of measures could be taken, My Daily published the following article two hours later:

On the 14th the Korea Internet Safety Commission looked into the postings by a native speaking instructor site which has brought on social criticism by publishing writing that denigrates Korean women and describes how to seduce children.

On that day, Korea Internet Safety Commission team leader Han Myeong-ho revealed that "We haven't received any reports regarding this scandal/incident." "[We are] doing real time monitoring of the spread of problematic writing through self monitoring. After deliberating and reviewing the intent of and situation surrounding the writing that has been spread, we will select the steps to be taken.

Meanwhile, the police cyber crimes unit announced that "We have received no requests to investigate this incident, and are not discussing specific ways in which to respond to it."

With the netizen backlash against the English Spectrum site which caused controversy by posting suggestive photos and comments demeaning women, it is currently temporarily shut down.

At about the same time, the Kukmin Ilbo published an article titled "Korea is a country where you can easily sleep with the women" which summarized 'Lucky Guy's post and mentioned his lack of fear of legal punishment and his advising readers to touch the bums and chests of young girls. The last two paragraphs:


The dozens of netizens who read 'Lucky Guy's post seethed. "I swore. My little niece learns English from a foreign instructor but is stopping. Foreign instructor bastards: If you think of Korean women as sexual playthings, we too will treat you like sons of bitches."

With some foreign English instructors here treating Korean women as sexual playthings and related news becoming known, attention is being paid to see if the demands of netizens calling for the introduction of a qualification system for foreign instructors will be realized.

The Hankook Ilbo published an article about the problematic post later in the afternoon:

This time, stir over 'How to molest students'

A message explaining how to molest students by a native speaking instructor posted at an internet site where foreign native speaking language instructors gather has enraged netizens. [...] [T]he furor isn't expected to die down easily.[...]

On the 14th alone, netizens who saw this post responded with hundreds of posts protesting it. Netizens angrily denounced the writer, saying, "Not even low animals would do this," and "Your daughter should also learn from an instructor like you." The site's administrator also said, "It's a clever crime scenario you really don't want to believe." "To raise awareness among educators and parents who send their children to hagwons, it wasn't deleted and a translation into Korean was put up."

Recently, foreign English instructors posted comments denigrating Korean women such as "Korean women smell" and "Women who learn English treat you (sexually) like a king" at a site often visited by instructors, and due to netizens who opposed it, the site closed down and an anti site was formed.

If we remember the comments to the original post, there was this response:

In the above Hankook Ilbo article we're told this about the webmaster:


The site's administrator also said, "It's a clever crime scenario you really don't want to believe." "To raise awareness among educators and parents who send their children to hagwons, it wasn't deleted and a translation into Korean was put up."

I'll take it the webmaster wasn't a member of the hagwon owners' association. It still boggles the mind that, rather than delete an offensive post, he chose to translate it instead.

Lastly, it's amusing to see the article state that "the furor isn't expected to die down easily." Obviously, not with the Hankook Ilbo publishing articles with subtitles like "The denigration of Korean women even extends to children" it wasn't.
Posted by matt at 1:45 PM

Did anyone ever find out the exact origin of that post, like who wrote it and who exactly was distributing it?