On the evening of January 14, Dalian published the following article by reporter Gu Min-hoe, who would write all of Dalian's articles about this incident (thanks to the Marmot for allowing use of his translations): 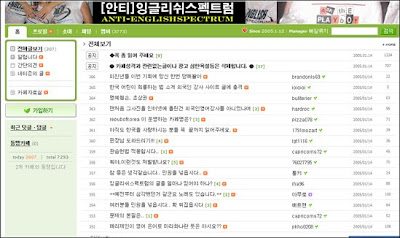 The Anti English Spectrum Cafe, which is leading the 'movement to expel unfit foreign
instructors' due to foreign English instructors' demeaning of Korean women
'Korean women caught at lewd party' blows up, moves toward lawsuits and movement to kick out teachersClub where the party was at argues "There was only an ad, we didn't provide the venue."

The aftershocks of the 'Korean women - foreigner lewd party' are heating up the internet and showing signs of expanding offline into a show of force and even legal action.

The backlash towards the Ask The Playboy forum of the foreigner job site English Spectrum, which caused controversy over its denigration of Korean women and which hosted a lewd party at a club in the Hongdae area, continues to spread. Netizens saying "foreign English instructors who denigrate Korean women should be punished" have established an anti site and will hold a demonstration and make them take legal responsibility by bringing accusations to the police.

Netizens have also started a petition campaign at the portal site Daum which reads, "Let's expel low quality foreign instructors," and is aiming for 10,000 signatures.

Netizens flooded the signature site with criticism of unqualified foreign English instructors, writing things like, "There have been issues with the qualifications of foreign instructors for a long time," and "It's time for society to be concerned about substandard 'foreign' instructors."

At the site, a netizen with the ID 'gintto' argued that, "Immigration screening should be strengthened and when unqualified instructors are caught, they should be fined and face criminal charges, and those responsible at the hagwon which hired them should also all face charges." As well, 'Bada-e bbajin dal' wrote, "Oppose the unconditional hiring of instructors in which their characters are not even looked at," while 'Delivery' wrote, "Foreign instructors who do not know the culture of another country are unqualified and such people should not be teaching."

Netizens: "Those like the thoughtless club who provided the venue for the foreigner party should be charged."

In the aftermath of this incident, English Spectrum, the largest site for foreigners looking for jobs in Korea, temporarily closed, but before it did, netizens had already secured material from the site necessary for taking legal action, such as photos and writing denigrating Korean women.

Anti English Spectrum cafe manager 'Bba'allyuchi,' who is leading the 'anti' movement by establishing the cafe and making the photos of the lewd party public, explained why he opened the cafe: "It's always just sad that some thoughtless women sympathize with foreigners who they don't realize have approached them with this (sexually demeaning) way of thinking about Korean women." "[This cafe] is a place where people who are worried about this and who want to make an issue of foreigners who demean Korean women as if they are all cheap whores."

'Bba'allyuchi' revealed in a post at the site on the 13th that, "I have already filed a complaint with the police and I am gathering materials to submit detailed evidence." Members who received this news of course provided the materials they possessed, and offered an enthusiastic response in regard to appearing together at the police station if needed.

On the 14th, Anti English Spectrum announced through a notice once again that, "We have submitted a complaint as well as a petition and report of the incident to Ilsan Police Station, but it was returned for now because there was no specific [person being] target[ed]." He suggested they would pursue a legal response once again after fulfilling the requirements by augmenting the materials.

A wide range of professionals such as lawyers, office workers and university students who are cafe members are preparing various legal countermeasures in regard to foreigners who posted the problematic comments and M Club, which is known to have been the location of the party.

As well, they are seeking a signature and street cleanup campaign to expel unqualified foreign instructors by holding an offline rally such as a 'picket protest.' Also, they are setting a course to turn this problem into a social issue and set straight twisted club culture and correct foreigners’ biases about Korean women.
Additional report on post by a foreign instructor introducing how to molest female students less than 10 years old.

After some media outlets reported on post by a foreign instructor introducing how to molest female students less than 10 years old, netizens [at AES] were enraged, saying "We can't tolerate this any further," even putting up an 'announcement for recruitment of a vanguard (do or die unit)' and urging, "Netizens, let's take direct action."

The announcement said, "Anyone who is a Korean national with a healthy / wholesome worldview can participate." "Let's gather in the Hongdae area at 6pm on the 15th."

The announcement also said that the netizens' "strike targets" are "the Yankee bastard who posted the instructions on how to carry out sexual violence against female Korean students and his sympathizers, the Yankee bastards who threw the shocking party, the owner of the bar who provided the venue knowing the facts about the party, and the recruiting company owners who hire under-qualified foreigners knowing they have criminal records or are under-educated."

The announcement said in a detailed guideline, "Providing detailed strike methods beforehand could be seen as a conspiracy to commit a crime." "That day at training time I will make them available. It will absolutely not go beyond the level where it would become against the law."

M Club owner explains, "We're not connected to 'Ask the Playboy and I never provided the venue."

Meanwhile, E, the owner of M Club, who has been having a rough time as the club became known for providing the venue of the 'Ask the Playboy' party, said in a conversation that day with Dailian that "Most of the photos of the women spread through the internet were spread via English Spectrum," and, "It was completely unrelated to the club's homepage."

E also revealed that regarding the anti [English Spectrum] cafe's legal moves, E would also "prove our innocence, and we are legally reviewing a response to the injustice of the anti side."

As for providing the venue for the party that had become an issue, E said, "After we opened in November of last year, we planned a party and put a banner ad at English Spectrum." "Foreigners saw the ad and just came and hung out."

As well, E explained, "At two planned parties, English Spectrum gave away our and their t-shirts to customers who wore them and hung out together."

Because of the high awareness about English Spectrum, clubs in the Hongdae area often put banner ads there." "I didn't expect that because we distributed t-shirts for publicity that two months later it would turned into such a problem," she said at a loss.

Regarding the party's atmosphere, she said, "Based on a few photos, netizens are portraying the entire party's atmosphere as lewd." "The party was not as decadent as it is known on the internet, and that level is common in clubs in the Hongdae area," she explained.

We'll be hearing a lot more about the party from the women involved - there are several lengthy interviews with them to come.

Not much about protecting children from foreigners, but then, as third manager Lee Eun-ung told the Donga Ilbo in February 2010,

The opportunity to form this group came in January 2005 due to a posting on a native-speaking teacher employment information website. During this incident, postings like “Picking up Korean women is easy… I had sex with a middle school girl” enraged Koreans. However, among the people who first joined our group, some concentrated only on attacking and degrading women who date foreigners. Because of this, a needless conflict structured as 'Korean men vs. Korean Women' was created. After this, through efforts at self-purification, it was settled on that our group would have the educational purpose of protecting our children from unqualified native-speaking teachers. [Emphasis added]

By "after this," however, he actually meant "just 6 months ago" (third result). (At the time of the English Spectrum incident, the Party Pooper posted about it and included a (now disappeared) photo of AES founder 'Bba'allyuchi.')

The above article notes that the AES members "are setting a course to turn this problem into a social issue and set straight twisted club culture and correct foreigners’ biases about Korean women." The Marmot noted at the time that "The funny part about that is that if you actually read what they have to say about Korean women in their forum, well, let’s just say much of it is less than flattering or empowering. Definitely not the kind of stuff that will correct any biases or stereotypes."

While most of the early AES posts have been removed (most likely to protect themselves from lawsuits), the above article does provide a clue to what they were like via this screen shot of AES (taken on January 14, showing that AES's banner had taken on its third permutation):

The caption tells us that this is a screen shot of "The Anti English Spectrum Cafe, which is leading the 'movement to expel unfit foreign instructors' due to foreign English instructors' demeaning of Korean women." It's just that, well, the title of post # 366 (at the top) is "Now's the chance to humiliate those crazy bitches."
Posted by matt at 2:35 PM