On January 17, Dailian published the following article, the first to link the Anti English Spectrum cafe with political activity.

With the stir over the 'lewd Korean women - foreigner party,' started by comments written by foreigners denigrating Korean women at the foreigner job site English Spectrum's 'Ask the Playboy' forum, those who attended the party are strongly denying a connection with 'Ask the Playboy' while netizens are fiercely resisting and starting a 'movement to expel unfit foreign English instructors.'

On the 14th a netizen petition titled 'Let's expel low quality foreign instructors' was started with the aim of getting 10,000 signatures, and as of the afternoon of the 17th there are about 9,000. In the midst of this, members of the Naver Anti-English Spectrum cafe, which is running the 'movement to expel unfit foreign English instructors,' had an online chatting meeting on the 17th and decided to meet offline on the 18th to complain to relevant government departments and the national assembly, and to make connections with citizen groups in order to spread the movement.

The war of nerves between the cafe manager and the owner of M Club, which is known to have provided the location for the party, shows signs of heading towards lawsuits in court. The netizens stand opposed, saying, "M Club's owner's words do not explain things" and "We condemn M Club, and if the women in the photos and the club owner bring a lawsuit for defamation, netizens will counterclaim and will raise court costs."

That day, over the phone with Dailian, cafe manager 'Bba'allyuchi' [빠알류치] revealed that, "The problems with unfit foreign English instructors led to a serious incident, but as of yet the owner of M Club and some women do not feel any social responsibility." "The purpose of operating this cafe is not to have a legal battle with them but to diagnose and correct the current state of English education which is badly situated in our society."

'Bba'al'lyuchi' also said, "Legal problems with the operation of the cafe will be settled through the law." "Because admitting and correcting mistakes is more important than ridiculous excuses, through connections with citizen groups, including the signature campaign, the seriousness of the problem will be made known and through relevant government agencies and the national assembly, we will make efforts in order to modify relevant regulations.

A detective with the Ilsan police’s cyber crimes division monitoring the cafe's activities due to reports by netizens revealed that, "We once monitored the relevant site but didn't discover any criminal issues regarding its activities." "If the people directly involved raise a complaint or accusation, then a concrete investigation can begin."

One official at the Ministry of Education, the agency responsible for enforcement against unfit foreign English instructors, revealed that, "In fact, enforcement is the [responsibility] of each city and provincial office of education affiliated with the ministry" and "At present, the Ministry of Education has no concrete plans to crack down on unfit foreign English instructors."

An official with the Seoul Metropolitan Office of Education complained about the difficulty of enforcement in a phone call with Dailian, saying, "In Seoul alone there are 12,000 hagwons but only 40 public servants supervising the hiring of hagwon instructors."

The official said, "Currently, related offices of education do not have many accurate statistics for foreign instructors, but we are identifying and studying instructors as a whole."

The official also evaded responsibility, saying, "Hiring foreigners who enter the country on tourist visas as instructors is illegal, but currently the office of education finds it difficult to supervise them."

Rep. Lee Gun-hyeon (proportional representative), GNP secretary and member of the National Assembly's education committee, said, "Problems with foreign instructors have arisen in the past, but recently, as the number of foreign instructors has increased, so have these problems increased." "We should have a thorough crackdown and legally regulate the need for teaching qualifications."

"We should strengthen existing qualification screening and actively review measures to strengthen enforcement in order to prevent them from teaching when they enter the country based on their personal capacity."

Environment and labor committee member Rep. Bae Il-do observed, "This incident should be approached looking at both education and foreign workers." "As interest in English increases, the demand for native speaking instructors increases, but the government's awareness is standing still."

Rep. Bae pointed out that, "The government lags behind in its appreciation of the change in the situation and does not have rigorous qualification screening, and there is also a problem with its discriminatory approach to foreign workers who work in different businesses, and foreign instructors."

Ruling Uri Party member and education committee Rep. Ji Byeong-mun said also, "Recently this issue has spread and we should review the preparation of measures and piece together the present relevant regulations and enforcement to emphasize the importance of English." "The Ministry of Education's will to change is also important."


Lots of fascinating stuff in this article. First off, regarding this -

"We condemn M Club, and if the women in the photos and the club owner bring a lawsuit for defamation, netizens will counterclaim and will raise court costs."

- it's pretty clear that, not only are these guys assholes ("Now's the chance to humiliate those crazy bitches," anyone?) , they're also completely ignorant about libel law. Not that I would pretend to know a great deal about it, but if the women were avoiding going to work because of the photos spread by these netizens, I'd imagine they'd be able to sue for monetary damages, whereas the netizens could claim no such damages (of any sort, barring a case of carpal tunnel syndrome or three).

"The problems with unfit foreign English instructors led to a serious incident, but as of yet the owner of M Club and some women do not feel any social responsibility."

Bad women! Bad! Quite the "serious incident," we have here - naughty pictures of Korean women "intertwined" with white men and their large... noses which, as AES would later have posted on their front page for 4 years, caused them to feel "unendurable humiliation." It would take some time, but eventually they would realize that tarring foreign English teachers as AIDS threats who need to be tested for HIV would be the best way to try to convince Korean women to keep away from them (Scott Burgeson has referred to the HIV tests as 'institutionalized cock blocking').

At any rate, three days before this article, AES cafe founder 'Bba'al'lyuchi' explained why he opened the cafe:

"The purpose of operating this cafe is not to have a legal battle with them but to diagnose and correct the current state of English education which is badly situated in our society."

So began the great backpeddle, and the move towards improving the "state of English education." In doing this, they began to articulate political goals:

[T]he seriousness of the problem will be made known and through relevant government agencies and the national assembly, we will make efforts in order to modify relevant regulations.

Also interesting is that we see Rep. Lee Gun-hyeon interviewed in this article. Four and a half years later, in September 2009, Lee would make news by declaring that "Native speaking English teacher crime [is] serious" and offering statistics which, ironically, showed that the foreign teacher crime rate was actually five times less than the Korean crime rate. Oops.

At any rate, AES was clearly serious about following up on their intentions, as this reveals:

When the parody posters come out, you know the netizens mean business. 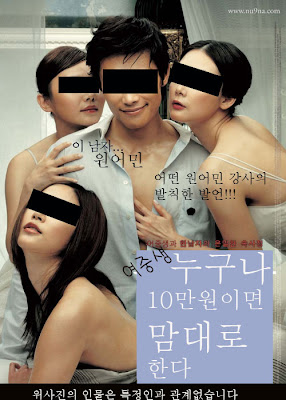 (Detourned poster for the 2004 film "Everybody has Secrets")

The secret inside story of a man and a middle school girl
If you have 100,000 won, you can do whatever you want with any middle school girl.
The people in the above photo are not related to anyone in particular

(Detourned poster for the 2002 film "Another Public Enemy")

English Spectrum
Unqualified foreign instructors
Hongdae XXXX Bar
If you can only learn English, you’ll give everything.
Some people with no self respect and no sense
[Sorry, not going to translate all of it...]

In the political realm, things went beyond the two representatives mentioned in this article. On January 18, a NoCut News article summarizing commentary in the national assembly described comments by Rep. Kim Hui-jeong in a National Assembly Standing Committee who talked about the influence of pro Roh groups and then suddenly said,

Then on January 19, a Financial News article describing "Internet talk" included this:

On the one hand, such suggestions for a "qualification screening" for foreign teachers were good ideas, and overdue; on the other hand, most of the media and official commentary about the 'problems' caused by foreign teachers revolved around the fact that the had "denigrated Koreans" on the internet (there was less candor about what had really riled the netizens up). Despite all of this talk on the internet and even by national assembly representatives, it would be more than two years before such "qualification screenings" would come to pass.
Posted by matt at 2:19 AM

I have received a book on Korean History with a unique perspective that you might be interested in for your blog. Please email me for more details