The protests by Christians against the source of all that is evil in the world - Lady Gaga - are rather amusing, as this article from last weekend relates:

About 300 Protestant church members will gather in downtown Seoul Sunday night to hold a group prayer against the concert in the capital, Kang Ju-Hyun, a prayer organiser told AFP.

"We will pray to God that the concert will not be realised so that homosexuality and pornography will not spread around the country," he said. 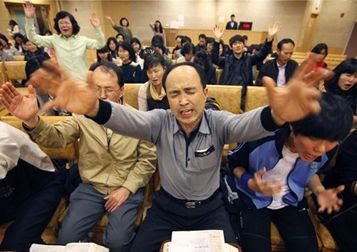 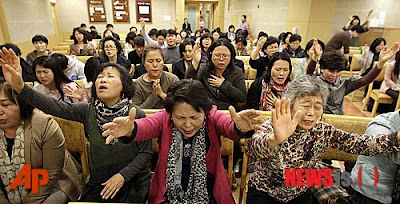 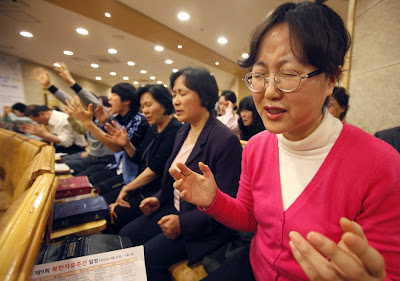 (From here)
Does anyone else find this 'two minute hate'-ish set-up to be a little...creepy? 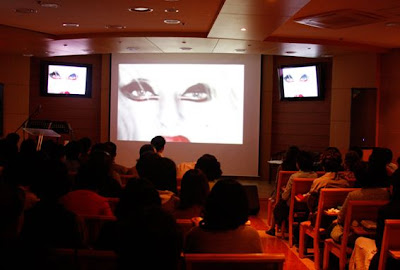 Kang, who leads a group called Alliance for Sound Culture In Sexuality, said other major church groups would join his campaign by holding protests around the Seoul headquarters of Hyundai Card, the concert organiser. 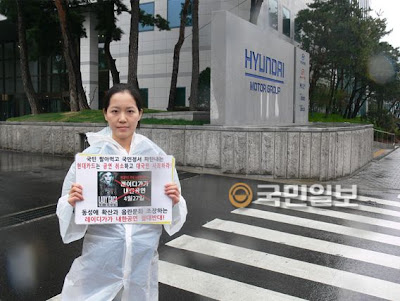 (From here; a close up is here)

The Korean Association of Church Communication vowed last month to take "concerted action to stop young people from being infected with homosexuality and pornography."

Kang's group last week put out street banners in Seoul accusing the eccentric singer of "spreading unhealthy sexual culture" through "lewd lyrics and performances," before they were removed by the city officials.[...] 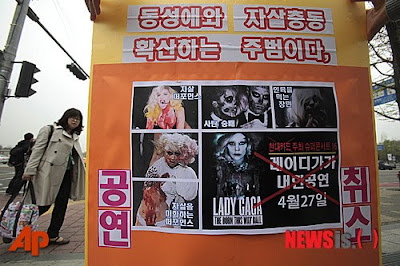 (From here)
The poster above reads "Cancel the performance of the main culprit in the spread of suicidal urges and homosexuality." Funny how that sounds quite similar to the slogans of anti-American church groups in the late 1980s who once held a "Rally resolving to expel AIDS and American pornographic prostitution culture." How things change.

Lady Gaga, whose real name is Stefani Joanne Angelina Germanotta, is famous for the hit songs "Bad Romance" and "Poker Face," and has become a strident voice for gay rights and anti-bullying campaigns.

Seeing as the Christians are trying to bully Hyundae and God into banning Lady Gaga's concert, I can see how they'd be against the anti-bullying campaigns.

This article looks at the reaction of moral guardians throughout Asia, including Korea, Indonesia, and the Philippines, to Lady Gaga's tour.

The multi-million-selling artist arrived in South Korea last week ahead of the first date of her "Born This Way Ball" at Seoul's 70,000 seat Olympic Stadium Friday, the start of a touring juggernaut encompassing 110 dates.[...]

Conservative Christian groups in South Korea have rallied against the self-styled "Mother Monster", accusing her of promoting pornography and homosexuality on malleable young minds.[...]

Scores of Protestant church members held a group prayer on Sunday against the concert, calling her dance moves "satanic" performances that "contaminate souls" of the country's youth.

South Koreans aged under 18 have been banned from the show, Lady Gaga's second concert in the country, after the government rated it unsuitable for younger audiences.

Internet portals and social network sites have been abuzz with intense debates, with most commentators accusing the religious groups of bigotry.

"What an international embarrassment they are! Do they really believe they can violate other people's right to enjoy her show?" said one anonymous user.

I can't say I really know anything about Lady Gaga; the only song I've heard by her was Cartman singing the song 'Poker Face' in the South Park episode 'Whale Whores.' Korea Bang has translations of the netizen reaction (much of it rather anti-Christian) here. More photos are here. Lady Gaga arrived in Seoul wearing a cleavage-revealing outfit, and one wonders if she may have already started to bring down her 'anti-movement' from within...

In other news related to evil emanating from the US, the Korea Times reporting on its being snubbed by USFK (you know a newspaper will be objective when reporting on itself!) in two different articles is full of fun, what with quotes about the "lying," "authoritarian" USFK Public Affairs Office, which does not deal "with [Korean] reporters in a professional and sincere manner," acts "as if they are occupation forces," and "needs to make more efforts to regain trust from Korean reporters."

"I believe there is a need for us to take collective action to urge the U.S. Forces to improve their way of dealing with the media," said Bae Seong-jun, the head of the association and a reporter at broadcaster YTN.

YTN, paragon of unbiased news reporting that it is, has every right to urge this action.

Speaking of evil emanating from the US and ethical news reporting (or more, editorializing), the Hankyoreh has an editorial on the discovery of mad cow disease in the US (hat tip to Scott Burgeson):

South Koreans have responded very keenly to this. Indeed, we can get some sense of how sensitive the response has been from the fact that some department stores and supermarkets have independently halted sales of US beef, even though the government has yet to announce any measures.

Perhaps because the stores are afraid the Hankyoreh and other leftist news outlets will help set off another movement against mad cow disease-tainted beef being sent by the US to ravage the Korean peninsula?

Seoul’s response was tepid. Far from ordering any immediate quarantine inspection suspensions, all it has done is announce that it will be requesting information from Washington and strengthening its quarantine measures. This is far too casual an approach to take, given how intently the South Korean public is watching. It is all well and fine to be cautious, but this response raises questions as to whether the government’s priorities lie with citizen health or with the interests of the United States. It seems to have already forgotten that the candlelight vigils against mad cow disease four years ago were triggered by the irresponsible attitude of the government, which seemed to put citizen health second.

I'm going to go out on a limb and guess that the government most certainly has not forgotten about the candlelight vigils against mad cow disease four years ago, which were most certainly not "triggered by the irresponsible attitude of the government," but by anti government activists who skillfully created a panic using the internet and media.
Posted by matt at 12:51 PM

I imagine Koreans are similar to Americans in that people who rant loudest about the evils of homosexuality are probably deeply ensconced in the closet themselves.