Segye Ilbo interview with the women from the party, part 1

On January 16, the Segye Ilbo, which had previously published the first media report about the 'sexy costume party' photos, published a lengthy (as in, 2500 words in English) interview with the women seen in the party photos and the manager of the bar which threw the party. I'll post the first half today. Note that the identities of B and C, as described in the introduction, are reversed in the interview section.

[Interview] 'Denounced as a lewd party...'

We met with two operators of M bar, which has suffered from netizen rumors of it holding a 'lewd party' with foreign instructors, as well as three party goers. The hour-long interview took place on the 15th in downtown Seoul.

Throughout the interview they complained of injustice in cracking voices. Some of the women who attended the party also had tears in their eyes.

A, the person in charge of M Bar, dismissed the malicious rumors floating around on the Internet: "Other than a banner ad we submitted to English Spectrum, we have nothing to do with the site." "To liven up the mood, the manager danced on the bar like in the movie 'Coyote Ugly' for only a minute or two; that the entire party was like this was a misunderstanding.

B, who suffered torment when photos of her dancing with her foreign boyfriend became known, said, "We hung out there not realizing there was a party." "A photo of my boyfriend and I has been spread as if I just met some foreigner and he tempted me to have sex."

Manager C, who suffered psychological torment due to a photo of her dancing on the bar being spread, said, "I will request a formal apology from the anti [English Spectrum] operator who maliciously spread the photo." "I will also sue some internet media which thoughtlessly kept reporting using my real name after seeing how the incident progressed."

Next is a summary of the interview.

Reporter: What is E site?

Owner A: It's a job finding site for foreign English instructors living in Korea. The site is not limited only to instructors, and foreigners exchange information there.

Reporter: I heard that [you] operate the site.

Owner A: I met with the team which manages the banner ads there. Not only Hongdae clubs, but also Itaewon and Gangnam clubs have requested banner ads to promote themselves. That I operate the site is nonsense. There is absolutely no relationship. If I operated the site I would have to answer in regard to the scandal over some thoughtless foreigners, but our bar is separate. I only paid a certain amount of money so they would promote the bar with a banner ad.

Reporter: So you didn't know anything about the Ask the Playboy forum at English Spectrum?

Manager B: There were three forums that I know of. Among those there was one problematic forum. A post was put up at the bulletin board. Foreigners (and Koreans - i don't know) who saw the party banner came to the party and took photos, and those photos were posted at the forum.

Reporter: What people came to the party?

Victimized woman C: I honestly didn't know there was a party there. Originally I'd only gone to the bar once or twice. It was a place with 70s and 80s music and bottled beer that I went to with my friends and foreign boyfriend. I didn't know it was a sexy costume party. I didn't know about the show either because it was so short and improvised. There were many people who didn't see it. At its climax when photos were taken, I guess someone decided 'That girl is having fun.' A photo of me with my boyfriend seemed to show a foreigner hitting on me and trying for sex.

Reporter: Were some people who wore the problematic t-shirts not admitted?

Manager B: There were t-shirts at the second party. In particular, the picture of the girl[s] wearing the wet t-shirt is not a picture from our bar. At the second party, English Spectrum, which hosted our banner ad, distributed t-shirts for free to some customers to create publicity.

Reporter: What was the first party?

Owner A: That party's concept was a sexy costume party. Most people wore ordinary clothes like at a normal party. The weather was really cold so most people wore layers of heavy clothes and were feeling constrained. It really wasn't any fun. Half of the 80 people who came were Korean, and most couples were Korean men and women together and foreign men and women together.

Reporter: Why are you mentioning percentages?

Manager B: If you only look at the photos, they give the mistaken impression that it was a party for foreign men and Korean women. It's said that we provided the venue and hosted a party for the members of English Spectrum. The photos were taken by a foreigner. For foreign men, focusing on foreign men-Korean women couples was most interesting.

Owner A: At first the atmosphere at the party was dull, so to liven up the mood, a staff member choreographed a scene like in the movie 'Coyote Ugly' and got up on the bar, poured water over body and danced. Two buttons were undone and water was poured on her. However, because the person taking the photo was down below, her panties were exposed. It was for a short time, not even a minute or two. The atmosphere of the entire party has been misunderstood due to a scene captured on the first day that took place within a couple minutes.

Reporter: There was also a photo of a foreigner with his genitalia exposed.

Owner A: The photo of the foreign customer wearing see-through underwear was taken in a corner and I didn't really know. Immediately [after] it was discovered he was told "This isn't a nude party" to stop him, but he said, "I'm a performance artist." That it was discovered late is our mistake as management.

Reporter: Are there sometimes cases like this where it's difficult to maintain control?

Owner A: There is no problem with control. There aren't many people with such control. Any business like a bar may have trouble keeping control if there are many people and a fight breaks out. This is not about the concept of control, but only about being a little late in discovering it. You don't realize that a camera is faster than control. All of the people who were at the party that day are encouraging us. There are also people who even ask us again and again if the 'M Club' reported in newspaper articles is this place. After the first party, there was a lot of worry when planning the second. It really wasn't fun as a party and it was absolutely nothing like a sexy and crazy night with lots of dancing. The second party was even less fun. Is it any different from a regular party?

This interview begins to give a clearer description of the party than the soundbites captured by earlier articles. The owner describes a "staff member" who "choreographed a scene like in the movie 'Coyote Ugly' and got up on the bar, poured water over body and danced." Considering that Manager B [C in the introduction] is described as someone who "who suffered psychological torment due to a photo of her dancing on the bar being spread," I assume that she is that staff member (who is easy enough to discern among the NSFW party photos). The owner, by saying that "There were t-shirts at the second party," also makes clearer which photos were taken at which party (and that there were photos from both parties posted at English Spectrum and later spread by netizens, including members of Anti English Spectrum): 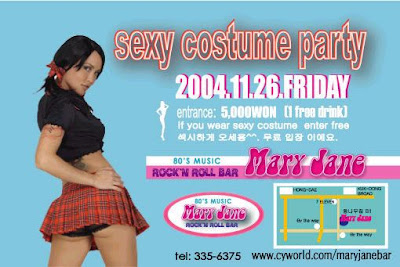 Readers also get a better idea of the relationship between the bar and English Spectrum (hence the banner ads above and the parties hosted there). In the second half of the interview the women discuss their treatment by the netizens, Anti English Spectrum, and the media, as well as their plans to counter this treatment.
Posted by matt at 2:37 PM