Worrying about the negative influence of drugged foreign teachers

On the topic of foreign teachers and drugs, here's a letter from a reader posted at the Munhwa Ilbo's site on November 24, 2010 in the "public opinion garden"

Not long ago, police data showed that 30% of foreigners caught for drug offenses were native speaking instructors. Methamphetamine and marijuana are cleverly brought from the US, smoked, and of course sold in entertainment districts. What our students are learning from these people is very worrying. With the sudden increase in drug smuggling by foreign instructors, the possibility that the hand of drugs might affect young students rises. Students are very well disposed towards foreigners, especially white hagwon instructors from the U.S. and Canada who use English. So, because they follow well and have a sense of closeness [with these teachers], circumstances can occur in which they learn about drugs from hagwon instructors who act without restraint.

* She uses the term 교사, or teacher, to describe what should be a 강사, or instructor in a hagwon.

I suppose, when the Donga Ilbo quotes immigration officials as saying things like "Incidents of some native speaking instructors taking drugs during lectures have been never ending," it's easy to understand how she might worry about the influence of foreign teachers upon impressionable students. Just for fun, here's another example of exaggeration from the Supreme Prosecutors office: 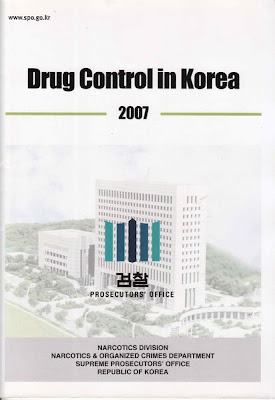 The number of drug-related arrests was 10,649 in 2007, an increase of 38% from 7,709 in 2006, surpassing the 10,000 person mark for the first time in five years since 2002. This rise was mainly due to a surge of small scale internet trafficking for methamphetamine, and marijuana smuggling and abuse by foreign instructors in schools or language academies from English-speaking countries like the U.S. and Canada.

According the the SPO stats in Ben Wagner's NHRCK report, there were 24 teachers caught in 2007 for drug crimes - out of an increase of 2,940 arrests. Obviously, since foreign teachers made up a whole 0.82% of that increase, it was necessary to describe the increase as being "mainly due" to them.
Posted by matt at 1:19 PM

Good text, they are generally paranoid. A friend of mine, newcomer to Korea was talked so much bullshit about taxi drivers by her Korean bf that she freaks out when she has to take a cab.