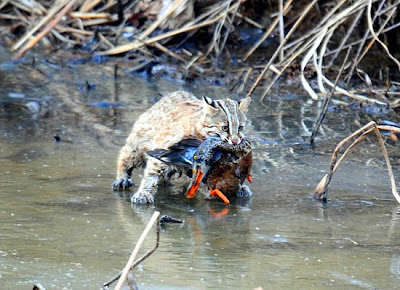 The Joongang Ilbo posted a few photos of a salk (wild cat) in Changwon with a duck. I've still never actually seen one before.

On the topic of animals, national assembly reps have provided statistics that prove wild boar incursions are on the increase:

Members of the National 119 Rescue Service were sent to capture or kill wild boars 103 times in 2006, but the number has gradually increased to reach 384 in 2010, according to Rep. Ahn Hyoung-hwan of the governing Grand National Party. [...]

I've posted on boars a few times before, and as a public service, I'll remind readers that an article five years ago

advised people not to run away or shout when they are faced with a boar on the street, adding that they should look straight into the boar’s eyes and promptly hide behind rocks or trees.

I've had the good fortune to see one of those wild cats. Damn things are scary, even though they are small.

There are often feral cats in the woods around cities, but these bad boys are like devil cats. Yikes!

Really? I see ducks all the time in Korea.