The following article was published by the Joongang Ilbo on November 11, 1983. Many thanks to David Carruth for translating this article.


On November 10th, the Ministry of Justice moved to prevent unqualified foreigners from teaching classes at foreign language academies inside Korea by making changes to the immigration regulations. The bill containing the new regulations was submitted at this session of the National Assembly and is scheduled to go into effect from July 1st of next year.

The bill makes it mandatory for anyone interested in hiring foreigners to work in Korea to select people with qualifications appropriate to the form of employment.

The purpose of the bill is to protect the jobs of Koreans by preventing foreigners from obtaining work as teachers at foreign language academies or employees at international firms. However, the changes would not apply to those coming to Korea for the purpose of engaging in missionary work or traveling.

In addition, the bill enables more efficient administration of the foreign population by limiting the number of times foreigners can extend their residence period in Korea to a maximum of two.

This bill, which came into effect in July 1984, does not seem very punitive, and says only that it is "mandatory for anyone interested in hiring foreigners to work in Korea to select people with qualifications appropriate to the form of employment." The report makes it clear that these rules were not limited to only foreign teachers working at language institutes. Here's how the Korea Times reported it on the same day (click to enlarge): 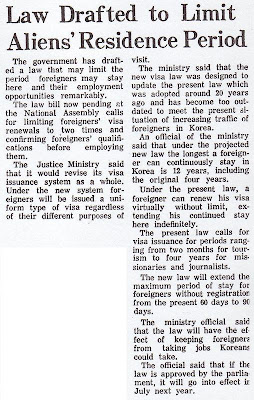 Interesting that foreign teachers were mentioned so prominently in the Joongang Ilbo article the same day, but were not mentioned at all in the Korea Times (a paper foreign teachers might actually be reading). It seems this law also led to the change from a 60 day stay without registering to the 90 day stay which is in place now. The next day, the Times published the following article: 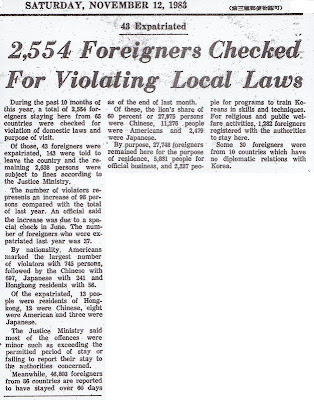 Interesting to look at the breakdown of foreigners in the country at the time: Of 46,803 foreigners from 86 countries staying over 60 days, 27,975 were Chinese, 11,276 were American, and 2,479 were Japanese (though Americans led in the illegal overstayer department). The fact that 2,327 people were there for programs to train Koreans in skills and techniques and 1,282 for religious or public welfare activities also highlights how Korea was almost reaching the point of being 'developed' (hence there were still a number of people there for welfare or training purposes), while the 5,831 there on business point to its growing economy (as do the growing number of language teachers being able to make a living in Korea, as well as more illegal endeavors like smuggling).

These statistics give us some idea of what things were like in Korea prior to the 'Le Monde' scandal which occurred in August 1984 - a month and a half after the law described above came into effect. It would lead to new visa rules for foreign English teachers.
Posted by matt at 11:51 AM