The influence of the Peace Corps on English teaching in Korea

In 1966 the first contingent of over 80 Peace Corps volunteers was sent to Korea to teach English in high schools across the country. On July 20, 1968, Stars and Stripes reflected on their achievements:

SEOUL — The initial group of U.S. Peace Corps men, who cleared the way for other volunteers in Korea two years ago, is now leaving but an indelible mark on the nation's English education etched by their efforts remains.

About 70 are going back to America as their duty tours expire, while 14 have elected to stay on for an extra six months to a year, according to Loren Cox, acting director of South Korea's branch of the Peace Corps.

Peace Corps I — as officials designated the first group to distinguish them from five others that have followed — made its biggest impact by paving paths for future Peace Corps programs and emphasizing other areas where efforts could be made in Korea, Cox said.

"When they arrived here we put them mostly in Korean high schools teaching English," Cox said, "but then we found out they could be far more Valuable in middle schools (junior highs) where the groundwork for the English language is first laid."

Most Peace Corps I members — requested by the Korean Ministry of Education to teach English — went about subtly remolding English teaching in their schools by stressing methodology, English competancy among Korean teachers and the active nature of the language.

Charles Goldberg, of Philadelphia, set up an English language workshop along with 36 other Peace Corps volunteers in two central provinces to assist Korean teachers who, he said, have a tendency to portray English as a "mystic cryptogram" to their students.

Over-all, there are now about 250 Peace Corps members — one-third of them women — scattered throughout the nation, but Cox looks fondly upon the "pioneers" whom he accompanied here two years ago along with the director for Korea, Kevin O'Donnell.

"The first group came in here cold with only marginal training and did an incredibly successful job by our standards," Cox, a former Peace Corps worker in Nigeria, observed.

"Testimony to their success is the Korean Government's continuing request for more volunteers," Cox said. "Their requests simply outstrip our resources."

About 100 Peace Corps workers are now assisting the Bureau of Health and Social Affairs on projects ranging from sanitation and child care to TB and malaria control in small, remote villages hidden in the mountains of South Korea.

Early next year 100 more volunteers are coming to teach English in universities and teachers' colleges, according to Don Mosley, acting deputy director.

As the first group departs, varied reactions were expressed by individuals who had lived as Koreans live for two years.

"Some volunteers remained exuberant even as they left for home," Mosley said, "Others were extremely disappointed. But almost all agreed that it was a profound experience, one which will give them better depth and perspective in the future."

Goldberg, who has extended his work in Korea for another year, admitted he was depressed when communication and accomplishment seemed almost hopeless goals.

"But the job tests you, it makes you use your imagination and gives you a great sense of responsibility and a tremendous insight into another culture," Goldberg said.

Cox added: "The Korean Government and people are very exciting to work with. Their sense of development and potential is very real, yet they are quite willing to recognize their problems and to work with you to solve them."

Most of the Peace Corps I workers are going back to graduate schools in the states, many to study East Asian affairs.

I like the bit about the "mystic cryptogram." Photos taken by David Lassiter, a K-1 Peace Corps volunteer, can be found here - the source of the photo below: 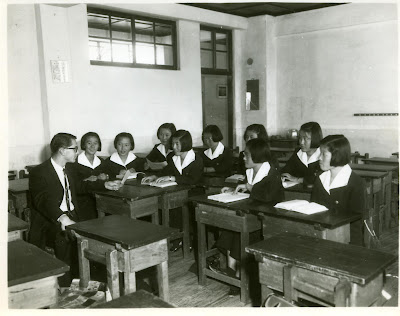 By the early 1970s, the Peace Corps volunteers were not only working in middle schools and teaching Korean teachers, but were also co-teaching with a Korean teacher in the classroom. These aspects of the native speaking teacher system in public schools remain in place today. More about the Peace Corps in Korea can be found in this article about a book (well worth looking at) published two years ago of photos taken by Peace Corps volunteers, such as the one below: 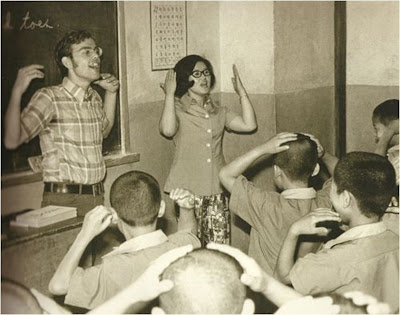 Kathleen Stephens, a former Peace Corps Volunteer who worked as an English teacher in the 1970s and the current US ambassador to Korea, reflects on her experiences here.
Posted by matt at 8:08 AM