On October 9, 1984, less than three weeks after the new rules were announced for foreign teachers, the Kyunghyang Shinmun published an article titled "Foreign Language Teacher Shortage." As we will see, however, this was due to the bill passed in late 1983 which came into effect in July 1984. Thanks to David Carruth for completing the translation.

Foreign language education at trading companies and businesses, various social organizations, and private foreign language hagwons is almost at a standstill or is in danger of being suspended

From July 1 the Ministry of Justice Immigration Office revised related regulations to prevent illegal employment of foreigners, and foreigners who work without permitted residency qualifications face up to three years in prison or a fine of 3,000,000 won, while those who employ such people face a fine of up to 1,000,000 won. Because of this, it is difficult to find foreign teachers.

In addition, the Immigration Office recently flexed its administrative muscles by sending a memorandum to individual businesses instructing them to only hire people with legal work contracts as teachers and even went so far as to issue fines. As a result, it is increasingly hard to find foreign teachers.

As a result, with the 88 Olympics ahead and the more than 5300 members of the Korea Trade Association and general trading companies wanting to expand trade, they are of the opinion there is a growing need for foreign languages at this time and that to halt foreign language education would be a great blow nationally, [and so they want] related authorities to relax teacher employment rules.

Currently only a small minority [of companies] such as the Samsung group sponsor teachers and have signed legal work contracts with foreigners. Most companies and organizations will not be able to follow the Ministry of Justice’s instructions.

In the case of the Daewoo group, which had been implementing a three-month foreign language education program for 30 employees at a time on company wide basis as well as offering English and Japanese instruction in its affiliates, they had previously hired 4-5 foreign instructors. Currently, however, they are at a loss after failing to hire even a single teacher. The Daewoo group had even drawn up plans to offer classes in additional languages but now they are back at the drawing board.

The situation of other leading groups and companies is almost the same.

One person connected with employee training at the Hyosung group said candidly, "Nearly all of the instructors who are currently teaching foreign languages at the various companies are not "vagabond foreigners" but rather people who have come to work either in business or religion/culture and teach in their spare time." He further noted that "following the instructions of the Ministry of Justice would be hugely expensive since it would necessitate going overseas and preparing a legal contract of employment before sponsoring an instructor."

Also, a trade association representative said, “Our country shouldn’t carry the stigma of being a “paradise for vagabond foreigners” but in circumstances where the need for foreign languages gets higher every day, the rules should at least be relaxed so as not to disrupt foreign language education for companies.”

S Hagwon in Jongno previously employed 4 foreign teachers but now has only one American, and has been forced to drastically reduce the number of classes.

B Hagwon owner Go In-gyeong (39) said, “It’s true that there were some shoddy private hagwons that hired unqualified foreign teachers, but it’s hardly a desirable state of affairs for one hagwon after another to have to shut its doors because they aren’t able to sponsor foreign teachers. The Ministry of Justice should take measures to allow [teachers] to lecture after passing a selective screening to prepare for foreign trade and the Olympics.

Currently there are 220,000 foreigners in Korea, and the number of long-term sojourners staying for more than 3 months (excluding diplomats and the military) has reached 40,000 people, but only 320 foreigners have received work permits.

It shouldn't be surprising that there was a shortage of teachers once the new rules, with their fines and jail time as punishment, came into effect. In fact, there was also a shortage of teachers that followed the changes to the E-2 visa in 2007. What seems surprising is that more changes were implemented before the effects of the previous change could even be measured.

It seems, with only 320 out of 40,000 long term foreigners getting work permits, that the government wasn't as strict back then, but without a breakdown of the different visas (such as we saw here), it's hard to discern much from that last sentence. The statement "Nearly all of the instructors who are currently teaching foreign languages at the various companies are not "vagabond foreigners" but rather people who have come to work either in business or religion/culture and teach in their spare time" is interesting, as it helps to dispel the 'paradise for vagabond foreigners' stereotype the media had been cultivating. Note its absence in the Korea Times article from the following day, which doesn't add much, but which I'll post anyway. 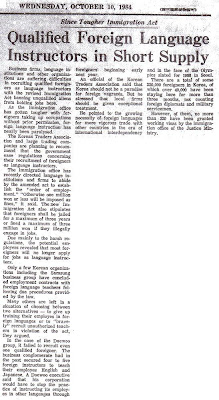 With this the series of 'French teacher scandal' articles is almost complete. I recently managed to dig up another short article, which will be posted soon.
Posted by matt at 11:12 AM