On September 22, the Korea Times published the following article. For more information about the bill, see part 13. 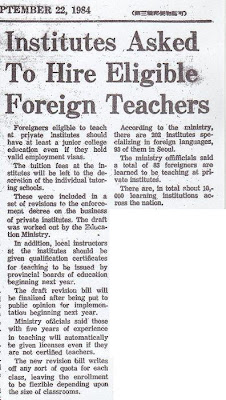 Some interesting figures there: Of "10,000 learning institutions across the nation," 202 institutes specialized in foreign languages, with 93 of those being in Seoul. It's uncertain what these terms mean, however, considering the Joongang Ilbo had earlier reported that

It's uncertain which statistics are correct, or what the difference is between an 'official institute' and a private one. As for this -

Foreigners eligible to teach at private institutes should have at least a junior college education even if they hold valid employment visas.

- the article fails to mention that a new visa had been put in place. I'm not sure what 'junior college education' means, but in 2001 I had coworkers who had 2 year college degrees with a TESOL certificate, which was valid until 2001 or 2002, when the rules changed.

In 1984 one paper said 202 institutes specialized in foreign languages while another said there were 70 official institutes with 500 private hagwons, it looks like they couldn’t count then and more proof of it is below when you pointed out…
“It's uncertain which statistics are correct,...”

Things have NOT changed(Koreans unable to count and keep accurate/correct English teacher statistics) from 1984 until today. I say they stop learning English until they learn to count.

The rules were later changed to not accept anything less than a 4-year university BA, but that had to be further refined when they discovered many (most) British BAs were three years.