[Update: The man in question turned himself in.]

According to Yonhap (via the Segye Ilbo) yesterday a netizen posted a video of a middle aged man groping a woman asleep (or passed out?) next to him. It was taken at Sincheon station on Line 2 on the last train headed for Sindorim at 12:30am Tuesday night. 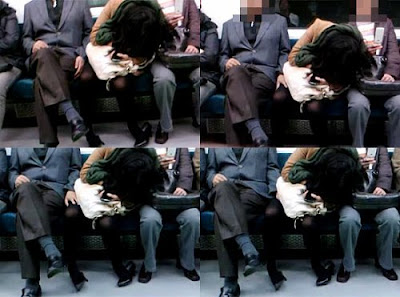 Perhaps in the future gropers might want to rein in their hands if people around them have their phones out.... which would probably put a stop to all groping on subways. Police are currently investigating the case using CCTV footage and traffic card ID records.
Posted by matt at 2:00 PM

The netizens have shown to be uber-detectives when it suits them. Just release the video without censoring and let them have at it. His name, job, home, and other personal details will be known within the day.

I guess secretly snapping a picture is more useful than actually going across the aisle and putting a stop to the groping that's forcing another passenger to cower and curl up?

This is a video. http://tvpot.daum.net/clip/ClipView.do?clipid=28754798&q=%C1%F6%C7%CF%C3%B6+%BC%BA%C3%DF%C7%E0
After he had enough 'evidence' the guy filming intervened. The girl was drunk but she does remember the guy touching her.
The perv gave himself into the police, presumably because he knew the video would go viral.
Not heard what has happened to the perp but I'm hoping the netizens in Korea will do their usual: posting all personal information online and destroy his life.

What he told police: "I do not remember, but I probably made a mistake because I was drunk."

Classic! Who knew that among its many magical properties, makkolli is a virtual "get-out-of-jail-free card"?

I get really pissed when I see comments saying: "the girl knew she was being touched, she's the one with the problem..." god...
But yeah I'm glad the guy intervened when he knew he had enough evidence, cause just sitting there shooting a video isn't really helping anything

kat:
I was pretty certain she was drunk - one only had to see the way she was leaning out of her shoes. As repulsive as I find the guy's actions, however, being the target of an internet witch hunt isn't something I would wish upon him.

But let's be real.

As much as the man is responsible for his own actions, drunk or not, so is the woman.

Don't be so stupidly drunk that YOU don't even know you're sleeping all over another dude in the subway, and that a big hand is up your skirt.

Same as I'd say to my friend going to a frat party -- if she gets so blasted that she loses consciousness, but is shocked to see that some idiots did reprehensible things. Fact is, you shouldn't put yourself in a position to be completely exploited.

"Blaming the victim?" No. If I have a daughter, I'm going to teach her to keep her wits about her and not be straight stupid. And I would teach that because I care about her well-being, not anything else.

Just like him being drunk doesn't excuse the man, so doesn't it excuse the woman for putting herself in stupidly compromising position.

Or anyone, for that matter.