Sighing over unqualified native speaking teachers, and other tales of Choryang-dong

On December 9th, the Busan Ilbo's 'reader's forum' section featured this letter from a concerned reader:

In 2010 the university entrance exam curriculum is changing, which is relevant to those who are currently middle school third graders, because the entrance exam they will take the 2014 school year will feature social studies and science and will focus on English, math and Korean. For this reason, English, math, and Korean will grow even more in importance and the study of English by children is becoming more of a concern.

At the hagwon our children go to there is a native speaking English instructor. However, I often hear that the instructors change every two or three months. In the children's hagwon alone, already in one year there have been three instructors.

According to the children the instructors went home, but parents in the area have said that they were illegal sojourners from English speaking countries, or if here legally, were vagabonds who did not hold English hagwon instructor qualifications who caused trouble after being employed and were sent back home.

It's said that among instructors or teachers in English hagwons which children attend, not a few of them are unqualified. And then when their ordinary salary is 3 to 4 million won a month, and we see our circumstances of unemployment, financial difficulties and the crowds of unemployed, we can only sigh.

A native speaker's normal salary is 3-4 million won a month? Wow. Who knew? As I mentioned in this post, the employers of native speaking teachers are almost never criticized in the media, so perhaps it's not surprising that she would blame the foreign teachers for the ridiculously high turnover at the hagwon she describes. Either the hagwon had really, really terrible luck with its foreign teachers, or something is wrong with the hagwon.

On the one hand, this goes to show the influence the hundreds of negative articles about foreign teachers published every year have upon regular folks. On the other hand there were some sentences I found difficult to translate in the letter which a coworker told me she found hard to to understand - that they were badly written in Korean. Make of that what you will.

She does, however, describe the teachers as '뜨내기' (though she incorrectly spells it '뜨네기') a word meaning 'vagabond,' 'wanderer' or 'itinerant,' a world that was more popular back in 1984.

This is not the only letter published about foreign teachers recently. I'll post another one from a week or two ago before too long.


Oh, and I couldn't help noticing her address, Choryang-dong in Busan. The area has been written about before: 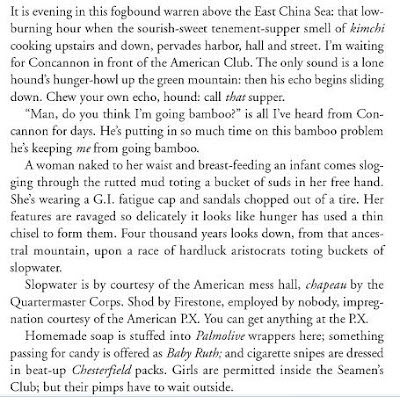 That's from the Nelson Algren story "472 Cho-Ryang-Dong: A Parlor One Purple Now Faded to Rose," first published in 1965 in a collection of stories about his sea travels. I'll leave you to guess what kind of establishment was at that address. As James Wade put it when he reviewed it in his 1967 book One Man's Korea, "Talk about kiss and tell!"
Posted by matt at 1:02 PM

I like how she ignores what her own kids say and listens to random rumors instead.

Shit. 3-4 million? If that's true, maybe I should quit my cush yet crap-paying uni job and head back to hagwons.

Hah! Just kidding. I would never work for a hagwon ever again.

Counting the free apartment, 1/2 of the insurance, and other costs related to hiring foreigners, that 3-4 million won might not be too far off.

The concept of changing language teachers every few months is not uncommon in hagwons. To use an adult analogy, it's more like dating around than going steady with one person. That does make me wonder how seriously I'm taken by students used to seeing a new teacher - and may even whine / complain if they see the same teacher for more than a few months.

To the writer, I say this: get the facts before proving your critical thinking skills are not up to snuff in a dead-tree publication. Perhaps understanding why there have been three instructors in a year might give you pause on spending that precious won of yours.

Finally, a thought on fairness. While the Choryang-dong area is known for its history, it seems inappropriate to compare the present case with that past. Please be aware of the assumptions you may be leading readers to make.

Man, you find the books.

Would it be possible for you or someone else to write a letter in response to hers? If she really thinks these things are true, then her reaction seems relatively mild, all things considered. Maybe (maybe!) she would be willing to learn the truth about the situation?

If enough of us write letters in response to all of these slanderous articles, it can do nothing but help educate someone, at least. My contribution: learning Korean as quickly as I can, lol!

I love the idea that I'm a vagabond, though. Sounds much more romantic than 'economic refugee' :P