Portrait of the leader-to-be as a young man 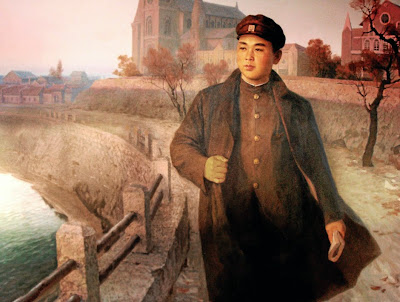 My friend Ryan just emailed me a link to this Globe and Mail article about a portrait presumed to be of Kim Jong-un which was recently photographed by a Canadian tourist in Rason, North Korea. It may give clues as to how Kim the youngest's past will be portrayed in future propaganda, with the suggestion that he was sent to the west to learn about its ways and technology.

“It’s big news,” said Brian Myers, an expert on North Korea at Dongseo University in South Korea. “It’s hard to be completely certain on the basis of an untitled image alone. … But I cannot imagine a schoolboy outside the Kim family meriting this kind of painting, and it is very similar in mood and layout to depictions of the young Kim Il-sung and the young Kim Jong-il. So I would assume that it is Kim Jong-un although it is not a particularly striking likeness in view of the Kim Jong-un we have seen photographed in the past few months.”[...]

The portrait appears to be the start of an effort to turn [a] potential liability into in asset. “It goes to the heart of what will be the regime’s main problem in glorifying the boy, namely the fact that he was overseas during at least part of the famine or [so-called] Arduous March. The regime is for some reason loath to let foreigners see this nascent personality cult,” Prof. Myers said. “We have seen footage of [Kim Jong-un], and of course we can see him on the TV news every few days … but we know next to nothing about how the regime is articulating his biography. This painting offers important insight into what kind of mythobiography the regime is either planning or is already teaching the masses in party meetings, study meetings etc. outside the view of foreign visitors.” [...]

There is, however, some debate among Pyongyang-watchers over whether the picture is important. Andrei Lankov, a respected North Korea expert at Kookmin University in Seoul, scoffed at the notion that this was the new boy’s coming-out portrait. “This is his grandfather. Generalissimo Kim Il-sung. The background and school uniform leaves no doubt about it: the late 1920s,” Prof. Lankov wrote in an e-mail after seeing a copy of the portrait.

The entire article is well worth reading.

From there I clicked over to this article, which looks at the what responsibilities Canada might have as a member of the United Nations Command in the event of a Korean War. It has this to say about Canada's current military involvement in Korea:

Meanwhile, this Korea Herald article provides some numbers when discussing North Korea's military capabilities, some of which are rather sobering (like the north having 5,200 multiple launch rocket systems).

And while on the topic of the north, Scott Burgeson sent me a link to this post about North Korean anchorwoman Ri Chun-hee. She really does need to be heard to be believed. She's also looked at in this broadcast by Jason Strother.
Posted by matt at 8:52 AM

I certainly have no idea who, when or where this drawing is supposed to represent but I'm curious why Prof. Lankov feels that the historical look and feel (i.e. 1920s) should settle the matter.

Isn't North Korean propaganda generally more interested in conveying an emotional impression than historical accuracy? It certainly resembles Kim Il Sung, but if it's supposed to be the grandson perhaps the intention is to blur the image of the two in the collective conscious and the resemblance is intentional.

There are drawings of Kim Jong Il on horseback and in garb that look ancient and are reminiscent of similar timeless images of his father.

And as for historical accuracy in NK prop imagery, recently there have been news stories with images of a poster of a "modern day" North Korean cosmonaut that looks like it's from the early 60s - and in contrast, reports are that NK high technology (i.e. the nuke facilities) are supposed to be very modern looking.

Perhaps the scene pictured here is supposed to show Jung-Un's European study abroad period but with his traditional NK pride symbolized by the old school uniform. His education in Europe has been emphasized in propaganda (especially his exceptional language ability). If it's Europe, isn't that the way Europe should look for the NK public especially considering the mood of the piece? And if that's a church in the background(?) it seems like the cross bearing steeples have been conspicuously cropped.

The idea that this was Kim Jong-un simply doesn't hold water, but it is symptomatic of a clueless press that is trying to find signs of Kim Jong-un's ascension even when there aren't any, to the point of making it up.

I haven't yet printed an update (I'm in the middle of finals and I should be getting back to my paper now!), but I got an email from another blogger who told me that the folks at Coryo Tours said the painting was in fact of Kim Ilsung in Jilin (not North Korea, as I had surmised).

Mr Wagner, on a totally different subject, in this comment at The Marmot's Hole, you seem to be suggesting that South Korea's claim to the NLL rests solely on its legacy of being the de facto border since 1953.

You seem to be rejecting the idea that a median line would be drawn from the South Korea's island territories (서해 5도). Am I understanding that correctly? Do these inhabited islands (home to thousands of people) not generate territorial waters or EEZ? Do their shores not count as baselines from which equidistant points are determined, or does the mainland have to be the baseline? If so, what constitutes a "mainland"? Would Hawaii or Guam not generate territorial waters or EEZ?

My understanding is that the Five Islands of the West Sea, forming as they do something of a necklace just south of the North Korea-controlled Ongjin Peninsula, do generate territorial waters and EEZ, and the equidistance principle would be about where the NLL is.