On Tuesday I posted an article titled "Only 2% of Gyeonggi-do native speaking teachers are at Level S" which described the different levels native speaking teachers had been rated at in Gyeonggi-do. It was not clear exactly what these levels were, but as it turns out, they are simply the pay levels for teachers in Gyeonggi-do. This is made clear by a post at Anti-English Spectrum. If not for their links to government ministries and other agencies, who knows how much more in the dark we would be on these things?

Here's a breakdown by level and number of teachers:

Here is a breakdown by level, qualifications, and monthly pay: 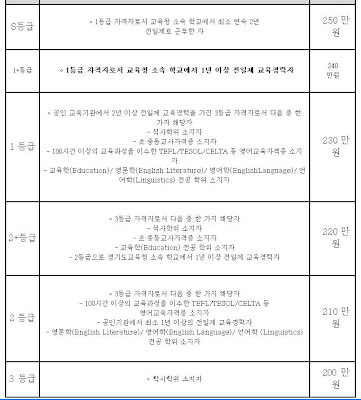 When I first saw the article, I wondered if it was based on actual evaluations of teachers, which would likely be more useful than rating them based only on their qualifications. Also worth mentioning is the fact that no school district would want to pay 2000 foreign teachers 2.5 million won a month. Of course, mentioning that might direct criticism towards the school district office instead of, as the aforementioned article did, onto the teachers.
Posted by matt at 9:46 AM

I'm a level S. I lost my job last year because my principal retired. The board of education refused to transfer me to a different school and told me that I had to re-apply. I contacted many recruiters. Even the big ones were very dishonest, strung me on and then just started to ignore my E mails. In the end one recruiter was honest with me and told me that it would be nearly impossible to get a job working for public school, because of my level the schools were refusing to even look at my resume.

They told me that most of them only wanted to hire level 2 or 3. After 3 months of looking, I was lucky enough to get a private highschool job which actually cares about the quality of people they can hire rather than how much money they have to pay out of there own budget over the government GEPIK program subsidy.

I was replaced at my old school after 5 years with a level 3 teacher. For some reason level 3 isn't on those official charts. A level 3 is some body with a bachelors degree in any subject with no further teaching qualifications of experience.

Sorry. Level 3 is on there. Ignore my last statement.

Stuart, every job I've "lost" in Korea has been over money. They let me go and hire someone else for cheap.

Pagoda did the same thing in 2005; they let go nearly half of their staff and hired cheap newbies at a significantly lower hourly wage. In the end, there was not a single person at their largest branch with more than 2 years seniority, including their "head teacher". People with 4,5,6 years of seniority were simply let go and not re-signed. My renewal was actually withdrawn while I was on vacation, 6 weeks before the end of my contract.

And they are not the only ones to be so short-sighted in how they hire teachers, as Gyeonggi is currently showing. For the vast majority of schools, money is the number one issue and "must be a white American" a close second with quality of teacher far down the list. Is it any surprise that these same teachers are then criticized for not being very good?

If they want good teachers, they have to stop being so goddamned shallow and cheap.

I hold the Hong Kong government English program in very high regard.

They only hire the best teachers and have some of best salaries I've seen outside of the middle east.

There's a lot of competition to get into it. I need to get my MA before I stand a chance of getting into the interview stage for that position.

They also want to retain qualified people. You must sign a 2 year contract and if you re-sign you are guaranteed a pay rise.

It's something I'm working towards in the long term.

Yeah, this is really silly. Of course only something small like 1% would be the highest level...

Re: Stuart. Two years ago (when I still worked in GEPIK), my co-teacher was very open to me about anything I wanted to know... and one day she revealed that GEPIK funding per teacher is somewhere around 50 million won per year... Do the math and you figure out that no matter the pay-scale of the teacher, the school still cuts a profit, even after bonuses, airfare, etc. The extra money is supposed to go into the English Zone or Classroom but at my school ended up being used to replace the aging computers in the computer lab.

Actually, the current subsidy is now 30 million won from the Board of education.

Before, it was around 40 million won.

Before then the schools were more than happy to hire a teacher on the GEPIK program, as they didn't pay anything and usually had some extra spending money thrown in.

Mike and Stuart are correct, but here in Yong-in currently, the city helps out and adds money of their own.