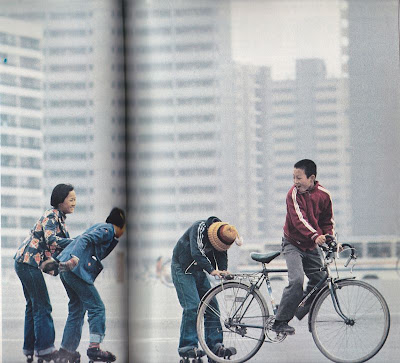 I managed to find the article "Seoul: Korean Showcase" in the December 1979 National Geographic at a bookstore in Toronto summer before last. That's the cover date, however. It actually hit news stands just as Park Chung-hee was assassinated (something it noted in its next issue, saying that it also published an (interesting) article about South Korea in 1950 just as the war broke out. One of my favorite photos, for obvious reasons, is the one below, of the Jamsil apartments, looking northwest from what is now Lotte World (click to enlarge).

The subway construction for line 2 can be seen. The apartments in the photo above are all quite new at that time (completed just the year before), but have since been reconstructed (except perhaps for those on the right), as can be seen below:

(The vantage point of the photo (likely from a helicopter)
is marked by the yellow circle.)
The article has many other photos; a few of the ones I liked most follow: 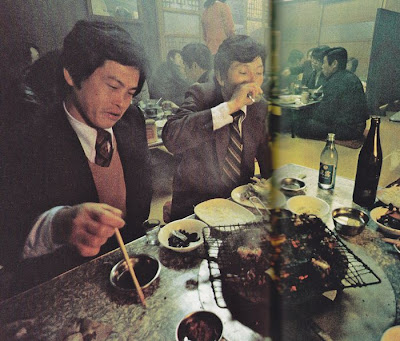 (Is that soju next to the beer?) 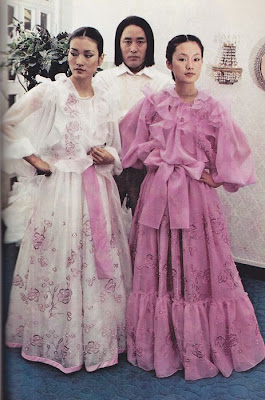 (No need for introductions.) 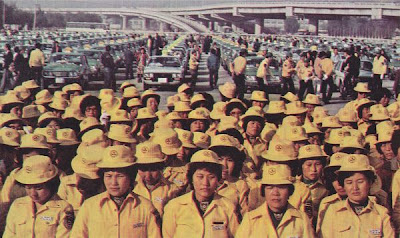 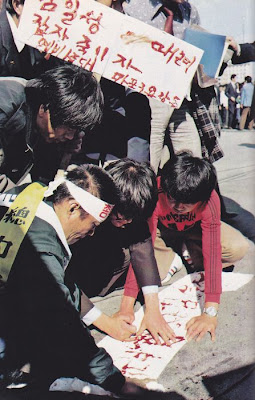 "Death to Kim Il-sung"
(See the captions below.) 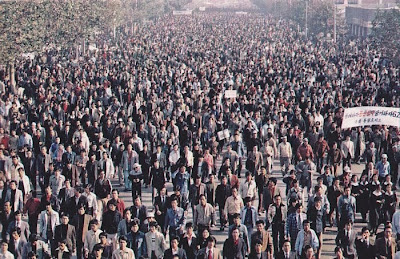 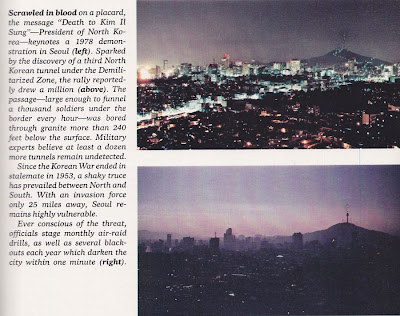 I guess having the air raid drills at 2pm has made accompanying blackouts pointless. Interesting to see how many people reportedly came out for a protest after it was announced the north had dug a tunnel under the DMZ. It's interesting how different that response was to actually having Korean territory shelled. Mind you, back then people believed the reds were actually red, and had tails, etc. One also wonders if attendance at that million person demonstration was mandatory for some of the participants...
Posted by matt at 1:52 PM

so I'm assuming that's designer Andre Kim, how old do you think he was in this pic?

Judging from Wikipedia, He'd be about 44.

HEY, I was wondering if you had any pictures of Japanese Travel Guides to Korea from the Colonial Era. I saw you posted some already, but if you have any others or any places where I could find others, please do let me know!!! I'm writing a research paper and those pictures would be extremely beneficial!!!! You can email me at justin.pak@gmail.com.

Funny how little styles and fashions have changed in 30 years.
Those folks are still wearing those exact same clothes today.
If fashion has changed so little, I wonder how much the thinking of your average South Korean has changed. How about your average North Korean?