The other day I posted an excerpt of Nelson Algren's story about Busan in the late '50s or early '60s, and briefly mentioned James Wade's review of Algren's book published in One Man's Korea. Here it is, along with another offering about Busan (which both parodies and refers to Algren) from Wade's Scouting the City column (which was published in the Korea Times in the 1960s and 1970s under the pseudonym Alf Racketts). 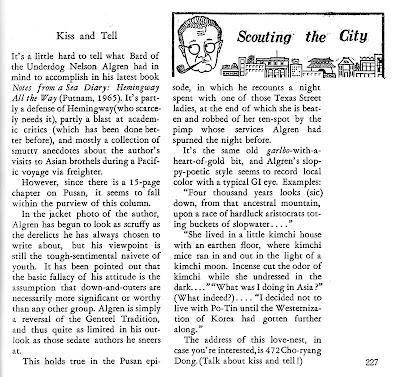 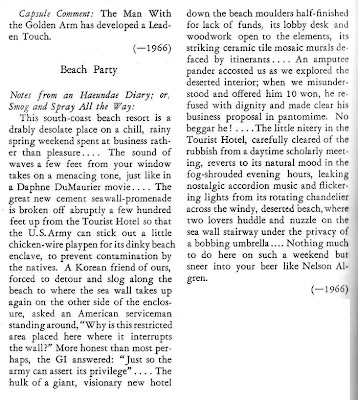 Matt, I recently discovered your blog and am finding the posts interesting and invaluable. I'm working on my second book which partially takes place in postwar Korea, so the articles, photos and excerpts you're posting are just fascinating. Thank you. Also, as I scroll through your posts, I'm seeing mention of "vintage" American writers of Korean experience, some of whom I remember meeting as a kid. I have an extensive library of books in English about pre-WWII and turn-of-century Korea (missionary memoirs and otherwise), and am so pleased to learn about others you've provided links to. Again, thanks. I am an RSS fan. Eugenia Kim http://www.thecalligraphersdaughter.com