"Disguised" native speakers are not to blame

"Native Speaker Phone English? Turns out it's a korian
Deception by yuhaksaeng [posing as] 'neitibeu seupikeo'"*

The Munhwa Ilbo published an article yesterday with the above title featuring interviews with several yuhaksaeng (Koreans who have studied overseas) who say they - and many others like them - pose as native speakers for Korean companies who operate 'Phone English' services. It notes that the reason they take the job is because they are tempted by the money they can easily make by speaking with a student for only 10 minutes. The article notes that the businesses promise native speakers but do not live up to this, and that the teachers' contracts have non-disclosure clauses (regarding the fact that they are not foreigners). An official from one such business asserts that when the teachers sign contracts with them, they have to confirm their foreign nationality, but one of the teachers retorts by saying that the businesses require their (Korean) resident number and address.

There's nothing specific about foreign native speakers in the article, which perhaps explains why the article clearly sides with the teachers and criticizes the companies that hire them. The yuhaksaeng teachers are simply young people tempted by the amount of money that can be made - quite different from (real) "native speakers who come and go only for the moment to make money" (as the KTU put it), and whose broken contracts are "a key factor intensifying regional disparities in English education," according to Yonhap, who based this on [mistaken] statements by National Assembly Education, Science and Technology Committee member Park Young-a. I'm sure the number of articles published this year which criticize hagwons or education offices based on the testimony of foreign teachers working for them can be counted on the fingers of one hand (if they can be counted at all, I mean).

Oh, and you have to love the illustration accompanying the article: 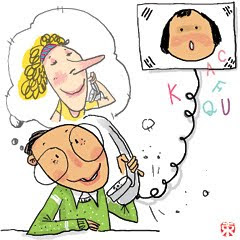 A girl with a nose long enough to dry laundry on compared to two Koreans with eyes the size of pencil leads. The Korean woman is probably wondering where her nose went.

Not surprising at all that they would go easy on the “yuhaksaeng.” In modern Korean (nationalistic) conceptions of morality, Koreans are good, but they can do evil acts. And when these “evil acts” occur, we are supposed to blame the situation, whether it be alcohol, bad bosses, Japanese colonial masters, a hard life, etc. This is because the “source” of Korean virtue lies in the notion of pure blood, which only Koreans, as a uniquely homogenous nation possess.

Foreigners, on the other hand, can’t be good. They can do occasional good acts like make kimchi, entertain students, volunteer at orphanages, or donate blood to dying children, but because they lack pure blood they therefore lack virtue. So the writers of these types of articles (who I suspect are probably more nationalistic than your average Korean) have no qualms about railing against the system and society (no specific Korean individuals, or course) when it comes to hiring unqualified Koreans, but unqualified NETs are always personally at fault for whatever “crime” it is they committed.

Wow. You seem to hate Korea these days. Yes, the article shows foreigners aren't working at these firms, but I don't see any blame being put on foreigners. You're inventing it here it seems.

When is a Korean Native Speaker of English a Wŏnŏmin?

The use of wŏnŏmin ("원어민") or "원어민 강사" or "원어민 영어 강사" has become a pretty fascinating term of art in Korea that can't really be translated as "native speaker".

While the article of this post has a point (though not much of one) in saying that fluent English speakers who happened to have studied abroad aren't wŏnŏmin, when it comes to hiring English teachers, ethnic Koreans who are clearly "native speakers" of English (sometimes speaking no other language) are often discriminated against for not being wŏnŏmin and are unfairly passed over in favor of non-Korean teachers who look the part.

But when it comes to criminal behavior by ethnic Korean English teachers the Korean press regularly uses the term wŏnŏmin, which naturally conjures up the image of non-Korean teachers that has been so carefully cultivated.

It's disappointing that in the eyes of Korean society the only time that ethnic Korean native speakers seem to be "qualified" as a bono fide wŏnŏmin is when they are involved in sexual assaults, drug crimes or murders (and thus "unqualified" as teachers).

If that’s the conclusion you’ve drawn from this post of this blog in general, then I think you have reading comprehension problems—or you didn’t actual read the post. If it’s the latter case, let me spell it out for you: the point was not to disparage Koreans, but to point out that the media portrays “unqualified” native-English teachers and Korean teachers differently. NETs are portrayed as threats to Korean society while some measure of sympathy is given to the Korean teachers. Pretty simple stuff. There’s no need to do Matt’s editorializing for him.

Milton:
Have you read Myers first book about North Korea? He mentions there at one point that, unlike Soviet socialist realism, DPRK literature always had antagonists who were simply misguided (not class enemies); he referred to this need to depict Koreans in such a uniformly virtuous manner as an 'ethnic reflex.' I always liked that term.

Gary Norris noted in comments to another post that "It's not going to disappear because we prove it's not true." The nationalist, moral lens that foreigners are viewed through (especially by journalists) makes that quite certain, especially when there's often no pretense of 'balanced journalism' where foreigners are involved.

B. Wagner:
Good points about the fluid definition of wŏnŏmin. Worth noting is that two of the prime examples of Korean Americans who were reported as being foreign murderers on the lam working as wŏnŏmin teachers were in fact Korean citizens, which makes the meaning of the term even more hazy.

Here's what the article about the fake yuhaksaeng teachers would have sounded like had they been treated like foreign teachers:


The greed of the sons and daughters of well-off families who have studied overseas is never-ending.

It has come to light that yuhaksaeng have been lining their pockets by deceiving unsuspecting ‘phone English’ customers. These privileged young men and women, who have studied overseas at costs of 40 million won per year, have been passing themselves off as native speakers over the phone in order to make easy money quickly.

According to one unsatisfied customer, “The lack of responsibility shown by these teachers is just astounding. I spent my hard-earned money on this service only to find out that they weren’t native speakers at all.”

While there are reports that these teachers have tricked their way into untold numbers of phone English companies, the owners of these companies are at a loss as to how to deal with them. “We require proof of foreign nationality when they apply for the job,” said one company official, indicating that these teachers may be faking their credentials in order to deceive their way into these jobs.

There have been calls to ameliorate this situation. According to Rhee Ung-eun, spokesperson for the Netizens With Erectile Dysfunction For Upright Phone English Education (NWEDFUPEE), “Yuhaksaeng regularly practice deception in order to make easy money. More stringent background checks verifying their identity are needed” and “As many yuhaksaeng studied in countries which have had mad cow outbreaks in the past, health checks to confirm that they do not suffer from the disease are needed to protect the customers they speak to over the phone.”

Matt, if you day job doesn't pan out for some reason the KT could really use your journalistic prowess.

Also, any chance of a post listing the articles that have cited wŏnŏmin as the problem in cases involving criminal and/or immoral behavior by ethnic Koreans and Korean citizens?

Off the top of my head I can think of a few:

2. The two separate May 2006 English village incidents involving a Korean-Canadian and a Korean citizen where the KTU blamed "unchecked wŏnŏmin kangsa" with "relatively free attitudes about sex".

3. The arrest of Korean-American David Nam for murder in 2009, which led to calls to beef up protections against wŏnŏmin kangsa.

4. Cho Du-sun's rape of 8 year old Na-Young, which to Rep. Lee Joo-young saying "of all foreigners wŏnŏmin kangsa are especially [likely to be] potential child molesters."

5. The April 2010 arrests of some five(?) Korean-Americans and Korean citizens for drugs and fake diplomas and the extradition of Korean-American Ronald Rhee for murder, which I believe (not sure) led to some articles about increasing protections against wŏnŏmin kangsa.

6. The extradition of Korean-Canadian Michael Ye for murder Oct. 2010, which led to several articles including one entitled "Wŏnŏmin kangsa turns out to be a killer."

There are a bunch more I can't recall. Would be interested in seeing a more complete list when/if you've got the time.

"Matt, if your day job doesn't pan out for some reason the KT could really use your journalistic prowess."

KT wouldn't let him through the front door -- he's too overqualified.

KT only uses monkeys chained to desks as reporters, who conduct interviews mostly via text messaging or, in a few "Award-Winning" cases, via Google Translate on new-model Galaxy S handsets.

The Korea Times: Proud Members of the Yellow Press!

KB- the joke about Matt writing for the KT was in regard to his yellow journalism parody piece:

"The greed of the sons and daughters of well-off families who have studied overseas is never-ending."

Hilarious, and sadly right on target. I wouldn't really wish him a job at KT!

I have read Myers’ book and I was very much channeling Myers in my first comment above. I think what Myers says is basically true of South Korea as well, though it doesn’t apply to the same extent in South Korean literature and arts (which do abound with genuinely “evil” Korean villains), but rather more to real life. The issue over Truth and Reconciliation Commission and the pardoning of Korean WWII war criminals always comes foremost to mind.

Just to clear up an unintended confusion for latecomers, my comment in #4 was addressed to Andrew, not B. Wagner.

And Matt, nice parody article. However though you mentioned “Deceit” and “Lack of Qualification” you forgot the obligatory references to the rest of the Six Sins of Native Teachers: AIDS, sex crimes, stealing Korean women, and drugs.