The Incheon International Airport Railroad (AREX) linking Seoul Station to Incheon International Airport will whisk travelers to their flights in 43 minutes, roughly 15 minutes shorter than via airport limousine. The fare is 13,300 won ($11.59) and makes no stops. The express train runs every 30 minutes, and operating hours are from 5:30 a.m. to 10 p.m.

A local train with 10 stops runs the same Incheon route in 53 minutes and only costs 3,700 won. The stops include Hongik University, Digital Media City, Gimpo Airport, Gyeyang, Geomam, Unseo and Incheon International Airport Cargo Terminal. (Gongdeok Station will open at the end of next year.) The hours of the commuter line are 5:20 a.m. to 12:00 a.m.

Travelers departing for Gimpo Airport can use the local line from Seoul Station. The trip takes 19 minutes and costs 1,200 won.

As I posted back in November, according to a Hankyoreh article I read, the transfers at Hongdae Station and Gongdeok wouldn't open until later. Obviously, I was confused when I saw this sign at Gimpo Airport Station. 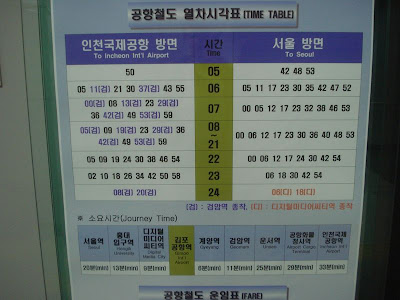 The Hongdae transfer was listed, and though I didn't get a chance to try it out yesterday, a friend of mine (who I sorely disappointed when I mentioned the Hongdae transfer wouldn't be open for some time) messaged me to tell me it was indeed open, and that the trip from Banghwa Station to Hongdae took 20 minutes. When I tell people I live near Gimpo Airport, I often hear about how 'far' away it is. It started getting closer with Line 9, and it's even closer now with this new line open. It'll be nice to finally take a ride on it, seeing as I've been photographing its construction for the last four years.
Posted by matt at 8:48 AM

That's a nice surprise to get.

Did construction begin four years ago, or is that just how long you've been following it?

I'm wondering when the Suwon-Bundang line extension is going to open -- it was started four years ago, or more.

I think it started about 5 years ago; I started taking photos of the Magok railway bridge construction in the summer of 2006. According to a quote in this post, it was originally planned to open in December 2009.

Haven't a clue about the Bundang Line extension. From what I've heard it's going to be awhile...

Yesterday, in the Suwon-Bundang subway construction area, I saw a sign from a bus that had a date on it: 2013:12.

That is quite a while...

I took the AREX yesterday and it was sweet. Straight to Seoul Station, although the trek UP from the platform is a bit much. You're at least 5 or 6 "basements" down with ludicrously long escalators for each.

If you're leaving for the airport, be careful on your way down; I think I saw a few Morlocks skittering around down there.

That's great news. I was very disappointed I couldn't make it over for the first day.
I had an annual health check appointment I couldn't break.
Hope to come over in 2011 to see it.