From the Korean War to Bruce Lee via Pierre Berton

Update: ROK Drop has a good post on the Battle of Kapyong here. A new Joongang Ilbo article also looks at it.] 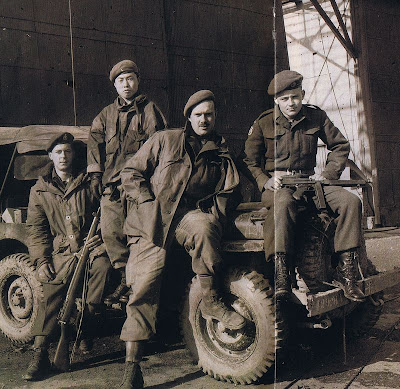 When I was home at Christmas I found several articles I'd clipped a few years earlier about Korea. One of them was an article about Canadian participation in the Korean War from Macleans, July 21, 2003. It was written by Pierre Berton (with sidebars featuring interviews with veterans by Benoit Aubin). There are several contemporary photos in the article, including one of Berton himself (in the center, above), who was sent to Korea as a correspondent for Macleans in March of 1951.

The text of the Berton article can be found here; scans of the article including the sidebars and photos are here: Pages 1 2 3 4 5 6 7. The time of year when he arrived was in spring, and his description of the flowers should be familiar to anyone who has stepped outside in the last two weeks - even if his description of Seoul itself is very different:


I remember rattling down the impossibly narrow road that followed the broad valley of the Han River en route to the ravaged South Korean capital of Seoul. It was spring -- the flanks of the valley ablaze with azalea and rhododendron, the soft mists rising from the river below half screening the peaks of the conical hills as in a Chinese scroll. But the spectacle of Seoul shattered that illusion. It was, as I reported in Maclean's, a "carcass of a city" without running water or electricity, looted of food and fuel, its pre-war population of 1.5 million reduced to one-seventh that number. [...]

In case you were wondering what happened to the animals in the zoo on the grounds of Changgyeong Palace, wonder no more:


One day, driving through the old Chang Gyeong Won Palace gardens, a public park and zoo, I came upon an odd spectacle. Every cage stood vacant; every animal had been eaten -- with one exception. There, picking its way through the debris was a lone and starving ostrich, the most bedraggled creature I've ever beheld. At my suggestion, the UN command made the big bird its mascot.

Another article I found was a Reader's Digest article about Canadian troops in Korea from September 1990 (Page 1 2 3). Both articles mention the shooting down and imprisonment of pilot Andy MacKenzie and the April 1951 Battle of Kapyong, in which Canadian and Australian troops held off a much larger Chinese force. When the Canadians alone were left, surrounded by the enemy, to hold Hill 677, they called artillery fire down on their own position to avoid being overrun. The battle is remembered here (clip 17), in a radio broadcast on the 25th anniversary of the battle (in 1976). In the radio clip, the soldiers who joined the special Canadian force being sent to Korea in the summer of 1950 give their reasons for signing up:


"I'll be damned if I know."
"I had a fight with my boss."
"The only reason I joined was for adventure, excitement; I wanted to see something."
"Unemployment, myself. I didn't even know where Korea was."

Any Canadian English teachers feeling down because of the ongoing 'English teachers are losers who are only in Korea because they have no life goals' meme in the Korean media might feel heartened by the fact that they are, in fact, part of a long tradition of Canadians coming to Korea.

Speaking of Canadian traditions, for those who don't know, the aforementioned Pierre Berton was a reporter, broadcaster, and Canadian historian. Shortly before his death, at the age of 84, in 2004, he appeared on the CBC giving tips on something else Canadians in Korea seem to be known for (at least according to this); a video clip is here.

Looking up information on Berton's life also led me to something I'd seen before (in a documentary on my VHS version of Enter the Dragon), but had no idea he was involved with this 1971 interview with Bruce Lee.

How cool is that? I love listening to Lee talk - as much for his intonation and delivery as for what he says. Watching this for the first time years ago after taking a Chinese philosophy class, it was obvious how influenced he was by Taoist philosophy, and I loved the way he applied it to martial arts and everyday life.
Posted by matt at 8:16 AM

Great video! Thanks for posting it~

man, it's the little bits of canadian content that slip in that make this the best of the k-blogs

well, there's other stuff, too, but the pierre berton overload just then did it for me

Love to hear that announcer's voice again. Wish I could remember his name.

Thank you so much for posting that clip of Bruce Lee. He was so charasmatic in that clip and so well spoken. It made me wonder how large the impact of his work would have been over the years if he did not die. I believe he would have made some very great Hollywood blockbusters. His movies were of such low quality. Bruce pretty much carried the movies with his skill and presence.