A few weeks ago, on the eve of Youtube Korea having to implement it, I looked at how Korea's 'real name' internet system evolved. As it turned out, of course, Google decided not to implement the system after all:

Google’s Korea unit, however, has found a way around being subjected to the country’s Internet real-name system, voluntarily shutting down some of the Web site’s functions. A notice was available on YouTube Korea Web site’s on April 9 saying, “YouTube has decided to restrict its video upload and comment functions in South Korea.” It also stated, “Because there is no upload function, users won’t be required to confirm their identification.”

As the Korea Times continued,

However, since the changes are only effective for YouTube's Korean-language site, domestic users are still able to post videos on it if they set their country preference to one other than South Korea.

Google's decision to bypass local censorship laws may contribute to inciting Internet users to flock to foreign sites as a means of avoiding censorship. [...] Internet users are increasingly concerned about the level of Web surveillance here and many bloggers are contemplating "cyber exiles.'' "

Not so many users go to foreign sites,'' said an official from Daum. "However, if their Web activity is suppressed more, more and more users could become more willing to venture out of their habits and try other things. And Google may benefit from its clearer position in the long run.''

I'd tend to think that getting out of the Naver and Daum ghetto would be good for Korean netizens. It's the fact that they stay in the same corner of cyberspace that made it so easy for those wanting to sow misinformation about U.S. beef to have such stunning results last summer. While plans for the regulations making it necessary for sites with 100,000 visitors to register their real names predate the beef protests, the expansion of the real name system is sometimes perceived to be part of the Blue House's attempts to control the internet. Of course, this story (via Extra! Korea) is rather amusing.

While YouTube has restricted South Korean users from uploading video clips and posting comments on its Korean-version of its Web site since April 9, the Cheong Wa Dae (the presidential office in South Korea or Blue House) keeps posting public relations (PR) videos of President Lee Myung-bak on the site by registering its ID as a foreign user from another country. Internet users criticize the Cheong Wa Dae of undermining the intention of its real-name system.

Hwang Cheol-jeung, an official in charge of Internet network policy at the Korea Communication Commission, says, “There is no plan to punish either users who upload content on YouTube by setting their location in another country instead of South Korea, or Google Korea which facilitates such a route.”

A few days later, this same official would have a different attitude:

KCC network policy official Hwang Cheol-jeung says that the commission will be examining whether or not Google has engaged in illegal activities in any of the various services it operates in South Korea. Since Google’s Korea Unit is conducting many activities in South Korea besides operating the YouTube Korea video site, including search and keyword-based advertising, observers are concerned that this investigation could potentially turn up illegal practices in areas such as internet obscenity, unwholesome advertising, and copyright infringements.

In other words, they're saying, "Trust me. We'll find something to hang them with." As quoted at the Marmot's Hole, this description of a meeting last week of the National Assembly’s Committee on Culture, Sports, Tourism, Broadcasting & Communications was rather amusing: 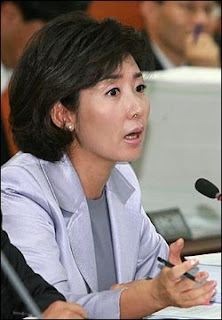 At the CCSTB&C meeting, Grand National Party lawmaker Na Kyung-won [left] said that with Google’s measure, “They are speaking as though Korea is a backwards Internet nation that is intensifying its Internet censorship. Why are you just standing around doing nothing?” Choi responded that plans were underway to “send a message of severe dismay to Google about their terribly commercial approach with which it has tried to deceive people by a transparent guile.”

Somehow, I doubt a 'message of severe dismay' will do much to change Google's position. Other Korean internet companies are not happy with the way Google has managed to get around the real name system:

Han Chang-min, Korea Internet Corporations Association secretary-general, expressed the frustration experienced by several Internet companies, “The fair thing to do would be to apply the real name system to all foreign sites accessible to users in South Korea, or else remove the regulation for South Korean businesses.”

Considering the government once thought that the best way to stop rising drug use by teens (in the mid 1990s) was to give drug tests to every single student, I don't think I would make a statement like the one above expecting the latter choice to happen. On the other hand, it's funny that an organization representing the likes of Naver would complain about lack of fairness in regards to Google, considering Naver essentially locked Google searches out of its fiefdom for years.

Google responded yesterday in interviews. While talking about commitment to freedom of expression, I'm sure it's the fact that Google (according to this article) has only a 3% market share in Korea that makes it willing to stand up to the government - unlike in China. This article notes something interesting:

The Lee Myung-bak government has been looking at more ways to monitor the Internet, after being repeatedly attacked by bloggers, first for its controversial decision to resume U.S. beef imports and more recently for its supposed ineptitude in economic policies.

The latest attempt comes from the efforts by GNP lawmakers to rewrite the communication privacy law and allow authorities further power to observe and track Web browsing habits.

According to the bill, law enforcement authorities get expended surveillance power beyond fixed-line telephone calls and are enabled to intercept mobile phone and Internet communications, which include e-mail, chats and voice over Internet protocol (VoIP) calls.

This is in addition to a new copyright law, which ROK Drop looks at here:

According to the bulked-up copyright law, the government has the power to shutdown an online message board for a maximum six months after the site is warned for a third time to delete pirated content and prevent its movement. In addition to the “three-strikes” rule, Internet users who repeatedly upload copyrighted content without permission could lose their Internet accounts.

There has been quite a bit of commentary wondering about the possibility of the government abusing the power this law would give it. In mid-March, people wondered why the police were so intent on arresting three bloggers who had supposedly manipulated the number of hits they got to make their writing appear more widely read, and wondered if it was because the posts had been critical of the government. Of course, it was just a few days ago that someone else was convicted of something similar:

The Supreme Court said Sunday it has convicted a Seoul man on charges of manipulating the number of clicks into a company's Web site in a scheme to lift its popularity ranking on domestic Internet portals. The top court upheld a lower court's decision to impose a fine of 3 million won (US$2,300) on the 38-year-old man, identified only by his family name Lee, court officials said.

Lee was indicted on charges of using a self-developed program to intentionally multiply the number of clicks and page views of an unidentified company Web site between September 2005 and March 2006. The top court said Lee has been found guilty of interrupting the conduct of business at local portal sites by illegally influencing the popularity and page view rankings through his click manipulation program.

I guess those who are against the heavy-handed way the government is trying to regulate the internet can't really argue that others haven't been arrested for manipulating hits. Manipulating the comment rating function at Nate.com was one of the ways 'mad cow rumors' were spread quickly on the internet a year ago.

My post on the history of the real name system referred to one of the first posts I wrote on this blog in June of 2005, about the Dog Poop Girl. A Joongang Ilbo article linked to in that post also told the story of another victim of an internet witch hunt:

[In] April, relatives of a 30-year-old woman who committed suicide after her boyfriend broke up with her wrote about him online. Soon, the location of his workplace and even his cell phone number were being circulated. He eventually quit his job.

A case related to this was the subject of a supreme court ruling last week:

The Supreme Court upheld a lower court ruling Thursday, ordering major Korean portal sites to compensate a man for failing to take steps to stop the spread of defamatory articles. The judgment, the first of its kind in the top court, means that portals are to be treated the same as mainstream media, which are held liable for damages caused by articles they display on their Web sites, even if the stories were originally created by writers not affiliated with them.

"Portals are to compensate the victim because they did nothing, although they knew that the articles were apparently defamatory and in wide circulation,'' the court said in the ruling, ordering the accused to pay 30 million won ($22,500) to the victim in compensation.

Real name systems to deal with, Google using "transparent guile" and not playing fair, and being held liable for users' content - those poor portals.

Of course, one of the bits of good news was that the blogger Minerva was found not guilty this week (for now - the prosecution is appealing). In the wake of this there are suggestions that a new cyber defamation law may be scaled back.

The government's overzealous move to control cyberspace through the introduction of a cyber defamation law faces an uphill battle following a Seoul court's freeing of Internet blogger "Minerva'' from jail Monday.

The cyber defamation bill, first suggested by the Ministry of Justice last year, is part of a revisions to the Telecommunications Law that are currently being pushed by the ruling Grand National Party (GNP).

Under the provisions, a person accused of "insulting'' others on the Internet and other telecommunications network could be punished by a prison term of up to three years or a 30 million won fine.

Some within the GNP and KCC are questioning aspects of this law, however.

"The problem with the cyber defamation law is that the rules could be imposed by arbitrary will, with some punished and some not under the same conditions, just as it is with the National Security Law,'' said Hwang Guen, a mass communications professor of Sunmoon University, who is a GNP advisor for media policies.

Kind of like investigating Google just to see if you can find something to pin on them?