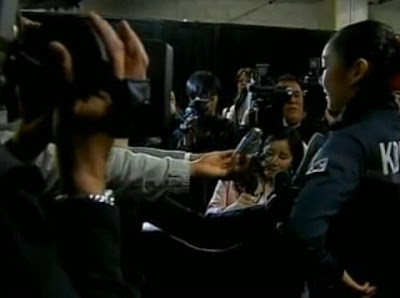 Korea's most recognizable star?
I was trying to figure out why, as of Monday, I've been getting over 1000 hits a day, and discovered the answer - Google photo searches for "Kim Yu-na World Championships" turn up, at the very top, two photos from my 2007 post titled (unsurprisingly) "Kim Yu-na at the World Championships" (which may or may not be in the top 20 for a google search by the time you read this). Strange that that post should be my most popular ever, two years later, but that's the internet for you.

It was in November 2005 that I read a Korea Times article (which I can't find now) about Kim Yu-na that had one of the two following pictures in it. 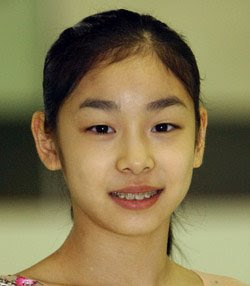 "Aw, isn't she adorable?" I thought, and when she won the Junior World Championships a few months later, I recognized her immediately (hard to miss her, seeing as she was on the front pages of many newspapers). The Joongang Ilbo published an article in January 2005 looking at the financial costs her family had to bear; things have certainly changed since then, as she's now one of the biggest stars in Korea. In the last three years she has changed from a "Figure Pixie (or 'elf') " to "Figure Queen" (or, in 2007, 'Wonder girl'). It was nice to see her finally crowned this weekend after her amazing record-breaking performances.

There have been a number of good articles in the western press, especially this one about how Brian Orser's experience being part of the 'Battle of the Brians' at the 1988 Olympics has put him in a unique position to help Kim, seeing as a similar rivalry between Kim Yu-na and Mao Asada will continue into the 2010 Olympics. Parts of an AP article were quoted by the Korea Times, who didn't bother to attribute it or put quotation marks around it, and, to add to their victory dance, mentioned that Mao Asada "had clearly been crying." Classy. The Times has also given us
articles like "World Press Lauds Yu-na’s Brilliance" (attributions included!) and "Kim Yu-na Also Internet Sensation." While the Chosun Ilbo has written about how Kim Yu-na will help Korea's global brand, it's also written about her relationship with her mother, and the Donga Ilbo has written about the people who have helped her get to this point.

Start a category? Probably. Writing a lot about Kim Yuna will do nothing but help your google hit stats.

Dear whom it may concern ,

My name is Jay who work for homestayKorea (http://www.homestaykorea.com) as a customer service assistant manager.

If you do not mind , we ‘d like to ask you to have an opportunity that we can proudly present your articles in blog via our internet web site.

At the moment , we are trying to remake our Internet website to improve.

When we visit your blog , we feel that we found last piece of puzzle which can make something perfect.

We believe that the homestaykorea’s internet web site will offer very unique and special information to many visitors through your articles in blog.

For a long time, we are trying to share the very helpful information with visitors who are interested in Korea or homestay service in Korea.

The HomestayKorea found in 1998, recently, around 7000 member of homestay houses through out Korea join the company and many travelers, backpackers from many different countries have tried homestay service .

Through cooperating with Korean tourism organization and Korean culture and information service, the company has been named the official host to the Republic of Korea official homestay promotion service in 2002 world cup game.

Even you do not accept what I suggest you, please send me a reply to know your opinion