A few articles about birth, death, and the troubles between

The Joongang Ilbo has a lengthy article about sanhujoriwons, or postpartum clinics, where mothers can rest for two weeks after birth - for two million won and up.

There are 415 registered sanhujoriwon nationwide, according to the Ministry for Health, Welfare and Family Affairs, and although the national fertility rate remains very low, industry officials say women have to book well in advance if they want to stay at one of the better-known facilities.

An official said the ministry doesn’t keep precise figures on the number of women who use postpartum clinics, but a survey by the National Health Insurance Corporation in 2007 found that 41 percent of the 200 women polled around the country said they went to a postpartum clinic. Kim Jung-wook, the secretary general of the Organization of Postpartum Care in Kore,a said the figure was around 30 percent.

There are some complaints about these clinics, however:

“In 2006, a total of 202 complaints regarding sanhujoriwon were registered but the number dropped to 132 in 2007 and rose to 153 in 2008,” said Yun Jun-sik, an official from the Korean Consumer Agency. The majority of complaints are about infections. Newborn babies often come down with enteritis, pneumonia and cold while they stay at sanhujoriwon. Back in late 1990s and early 2000s, some deaths were reported.

Still, one hopes that at sanhujoriwon things like this don't happen: 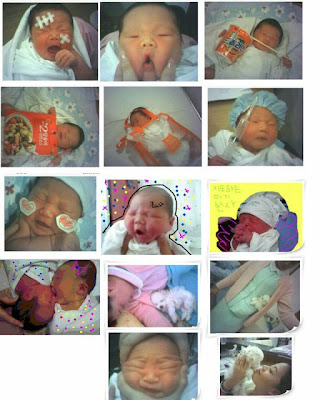 As the Chosun Ilbo (or Ohmynews, in Korean) reported in May 2005,

Korea's active netizens are outraged about shocking pictures posted on a website that show nurses treating newborn children like toys in an obstetrics and gynecology hospital. A nurse identifying herself as Lee, 24, posted on her homepage on Cyworld about 20 photos of women who look like nurses appearing to treat newborn children like objects.

Police were to investigate, but I don't know what the outcome was.

Moving from birth to the other end of the pendulum's swing, the Korea Times brings us an article titled "672 People Die Everyday," the daily death average for Korea last year.

The ratio of the productive population, between 15 and 64 years of age, accounted for 29.7 percent of deaths, down 10 percentage points from a decade ago. [...] The number of infants one year old or younger who died last year stood at 1,570, decreasing by 140.

Koreans were increasingy covered by medical services. The ratio of people who died in hospitals recorded 63.7 percent. In 1998, only 28.5 percent of deaths occurred in hospitals, with 60.5 percent occurring at home.

Speaking of death, the Korea Times tells us that "Actress Woo Seung-yeon, 25, was found dead in her home in Seoul in what appears to be a suicide, police said Monday. [...] Woo debuted as a model for fashion magazines and appeared in minor roles in the movies "Herb'' (2007) and "Private Eye'' (2009)." I think what's tragic about this, beyond the fact of her suicide itself, is just how accustomed people become to celebrity suicides. I posted a list of celebrity suicides here. The number, as far as I know, is now 13.

The Joongang Ilbo adds this:

Also yesterday, a 29-year-old woman who was trying to get into show business was prevented from killing herself at her home in Gangnam, southern Seoul. Police said that the woman, surnamed Park, attempted to hang herself after a phone call with an unidentified person.

In another article, the Korea Times looks at actors recently busted for drugs. I love the excuse those arrested have given for smuggling ecstacy and ketamine into the country:

Police officiers said the entertainers appear to have been tempted to use drugs on assumption that that ecstasy and other drugs kill the appetite, helping them reduce their weight. Ecstasy is a mildly hallucinogenic amphetamine and the most popular illegal drug in Korea, while ketamine, also illegal here, is a veterinary medicine that has a strong hallucinatory effect on humans in dilute doses.

Ecstasy is the most popular illegal drug in Korea? Interesting. The Korea Herald has an article about the use of the Thai drug Yaba, a form of methamphetamine, by Thai migrant workers in Korea.

Despite the Thai government's ban on the drug since 1970, Yaba has been widely used in Southeast Asian countries and was discovered in Korea last year [...] Last year, a total of 928 foreigners from 29 countries were booked for drug-related crimes, according to statistics from the Supreme Prosecutors' Office. Of them, 711 were Thai nationals captured for taking Yaba or selling it to other Thais.

Along with Thais, Chinese and Americans are most frequently arrested for illegal drug use in Korea. While there were slight fluctuations in the number of Chinese and U.S. drug offenders for the past two years - the Chinese figure down from 63 to 43 and the U.S. figure up from 47 to 63 - the number of Thai offenders increased almost 15 times last year from 52 in 2007.

The increase in Thai people here in recent years is cited as the main reason for the rising number of drug crimes committed by them. The Thai population in Korea has continued to grow, reaching 45,198 last year, with 14,346, or 31.7 percent considered illegal migrants.

An investigator notes that Thais tend to trade yaba among themselves (unlike westerners who buy drugs from the internet or from Korean dealers) so its easier to round up many at once, such as a case last November when 215 Thais were arrested in Busan. I found this interesting:

When found guilty of using or selling drugs, illegal migrants are immediately expelled to their home country. Those who stay here legally are sent to a detention center for foreigners and are usually fined.

"They don't feel any sense of guilt in using drugs because most of them have experienced drugs in their home country, which is relatively lenient on drug use. [...] "I sometimes feel sorry for people who didn't realize the seriousness of the crime and come to regret their behavior. But as an investigator, it's impossible to take care of all the individual cases."

I wouldn't have considered Thailand to be very lenient regarding drug use, but perhaps my perception is wrong. At any rate, Thais can be safe in the knowledge that, even if there were dozens of them arrested, the presence of a single English teacher would guarantee that the headline - and article - would focus on the English teacher instead.

As for something non drug-related, the Donga Ilbo (and Korea Beat) look at the government's plans to expand non-smoking areas.

Smoking will be banned as early as this year in all public areas and inside buildings. The Health, Welfare and Family Affairs Ministry said yesterday that it will designate 16 types of public facilities as non-smoking areas under a government roadmap on anti-smoking policy.

Certainly one of the things a friend who came back to work in Korea had to adjust to after living in Canada - with its smoke-free bars and restaurants - was the omnipresent cigarette smoke.


[Hmmm. In coming up with the title I was reminded of 'Birth School Work Death' by The Godfathers, a band I haven't thought of in over a decade. Funny how that happens.]
Posted by matt at 8:06 AM

Meh. I'm really tired of the whiney "they're out to get us foreigners" meme that has long had currency around the K-blogs.

Look, for example, at your two links. The first is from the Korea Times, with a headline that "three English teachers" were "caught for drug taking." In Marmot's headline, the same story is about "two Canadians," even though he links to a story that also highlights the same three in the headline.

The third person is a Korea (and an English teacher).

So what we have here is the Korean media mentioning three — Korean and foreigner — but the most widely read blog mentioning only the two foreigners, while ascribing his headline to the Korean press.

One of Marmot's readers falls into the trap:

So 39 people were caught, but the story is about the 2 Canadians? I suppose if the papers didn’t get in their weekly digs at the 위국인 변태 I suppose their heads would explode.

In the Korean press, it's not "about the 2 Canadians," but the foreign readership goes away thinking that. Thus, the ever-expanding acceptance of the meme that the Korean media needs to "get in their weekly digs at the 위국인 (sic) 변태."

Cognitive distortion, exacerbated by the echo chambers of the K-blogs.

I'm curious about the sentences dealt to the 'celebrity' drug users.

The Korea Time article listed a number of celebrities who were caught for using drugs. Did these people do any time? How much time are the ecstacy smugglers likely to do?

More important than headlines targeting teachers would be the knowledge that foreigners weren't being harshly dealt with by judges in comparison with Korean nationals.