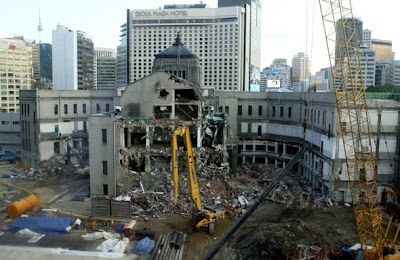 'Dismantling' Taepyeong Hall
I noticed the other day that Taepyeong Hall, the building behind City Hall, was missing. Its destruction began last August, as the Korea Times notes:

[On August 26,] the city started dismantling one of the city hall buildings, the Taepyeong Hall, located just behind the main front building facing Seoul Plaza. The work was part of the local government's scheme to remodel the 82-year-old buildings and establish a new city hall behind them by 2011. All city workers moved to a nearby annex in June for the construction.

The atrocious winning design for the new city hall is here; my preferred choice is here.

The main building and Taepyeong Hall are registered as cultural properties No. 52. Registered cultural property is a type of national cultural heritage, but unlike national treasures or historic relics, there is no legal protection restricting their transformation or demolition.

Seoul City Hall was, as Robert Koehler notes here, designed at the same time as the Japanese National Diet Building in Tokyo, but was completed 10 years earlier, in 1926. 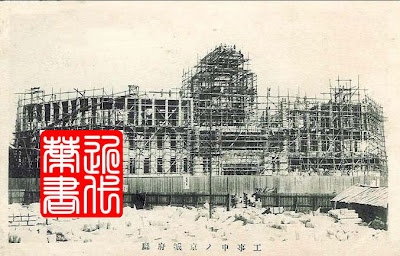 The above photo of City Hall under construction is from this blog, which has numerous photos of the building. Here's a shot of the interior of Taepyeong Hall, after its partial destruction: 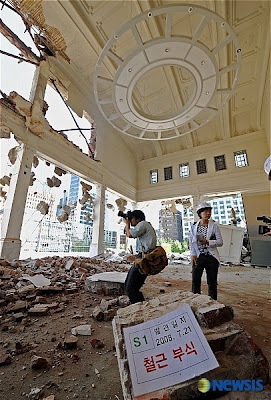 The interior of Taepyeong Hall (also here).
The city began demolition knowing that the Cultural Heritage Administration objected to the city's plans to destroy the buildings, and that it planned to register them as historical landmarks that very day. As the Joongang Ilbo puts it, "If a building is designated a historic landmark or a national treasure by the cultural authority, the authority can restrict its renovation or demolition." The Korea Herald continued:

Mayor Oh Se-hoon wrote on the city website Thursday [August 28] that he cannot accept it. "Just six years ago, the Cultural Properties Committee said it does not recognize the value of the City Hall main building as cultural property worth preserving," Oh wrote in the message addressed to Seoul citizens. "The committee had deferred naming the main building as registered cultural property in 2002, saying it lacked value for preservation, and registered it after reviewing for a year."

The Cultural Heritage Administration, a central government ministry, said Oh's claim that the committee did not recognize the building's value as cultural property for registration in 2002 was incorrect.

"Two people on the committee disapproved, so the committee did a review the next year and registered the building, citing 'a need to preserve the site and remains of our shameful history and to refer to the construction technology and materials used back then.'"

The city's main reason for wanting to demolish the buildings was because they were structurally unsafe, as the Hankyoreh describes:

As for the building safety issue, Oh said, “A large-scale renovation or demolition is urgent because the main building of the Seoul City Hall complex got grades of D and E for safety. There is a zero tolerance policy on the safety issue because the building will become a place for Seoul citizens after it is rebuilt as a public library,” Oh said. “To use it as a library, the building should be able to withstand the weight of books, so demolition and restoration work is unavoidable.” 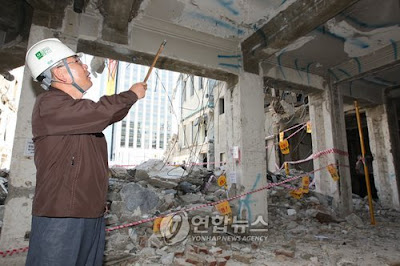 Pointing out the rust.
However, CHA Administrator Lee Geon-mu said, “The main building of Seoul City Hall received a C grade, or a rating of being good, in safety inspections by the Korea Infrastructure Safety and Technology Corp. in 2001 and the Korea Institute of Construction Technology in 1996. I can’t trust in the city’s argument in favor of demolition, that the building’s structural integrity has deteriorated in just a couple of years.”

(The chairman of Cultural Heritage Solidarity weighed in on this the next day.)

Here's a look at how City Hall has been changing over the last year or so: 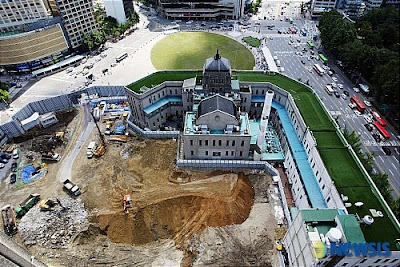 A later addition can still be seen at right. 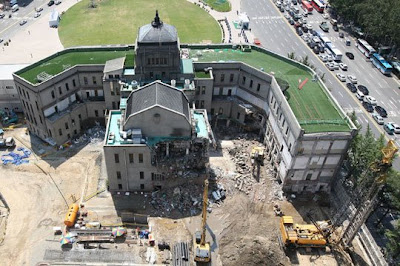 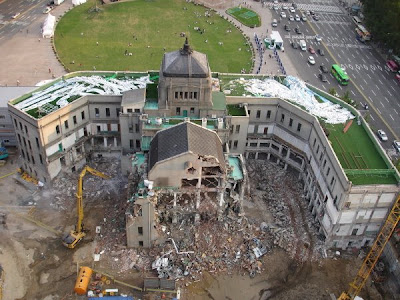 How it looked at the end of that day.
The Joongang Ilbo had this quote: “Following those results [of the safely studies], demolition of part of the buildings became inevitable,” said Oh. “The demolition does not mean that we dismantle everything. We will just tear down some weakened areas.” 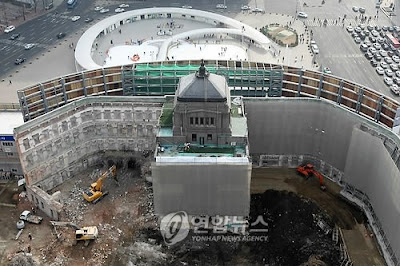 Yes, that is what it looks like now. There's nothing but the facade and the section supporting the tower. At about the same time I first saw this photo, the first anniversary of the Namdaemun arson was marked by opening the site to the public and putting up a display on its restoration. 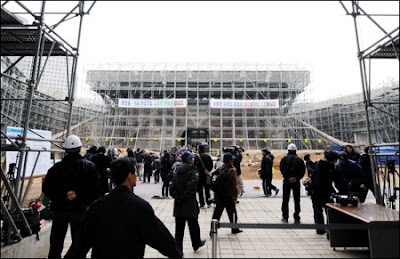 Perhaps they'll open up the city hall site a year from now. But hey - it's not all bad. The city government is going to build a nice 'artistic fence' around the construction site. What a stroke of PR genius.

Oh, and the city has also announced a 'Namsan Renaissance Plan.' And yeah, I guess carving the mountain into the shape of the Dokdo Islets and building a lake park around them is a pretty inspired idea.
Posted by matt at 8:17 AM

I dont really understand the quote. Maybe I am obtuse. Can you explain it to me please?
Gusts Of Popular Feeling
which pass for public opinion in a land where no such thing exists can be found only in Seoul - Isabella Bird Bishop, 1898

Isabella Bird Bishop traveled in Korea between 1894 and 1897 and her book Korea and Her Neighbours was published in 1898. She wrote that quote when she first visited in 1894, and at that time there were no newspapers (the first long-term paper was the Dongnip Sinmun (The Independent), published in 1896), thus "a land where no [public opinion] exists," public opinion not being seen to exist (by some) in the modern sense until you have newspapers. I just thought 'Gusts of Popular Feeling' summed up public (and media) reaction to news events in Korea, another way of describing 'naembi munhwa,' or how, in response to news events, people (and the media) heat up and cool down quickly, like a metal pot.

Your preferred choice for the new City Hall would give trigger migraines in some people who suffered from that. I'm serious about that: too many lines.

I'm very disappointed that they ended up taking down almost everything except the facade and the tower. I thought they were going to preserve at least the original part.

I have been hoping for grand projects like the new post office, new city hall, and even new Seoul Station to be in the same style and spirit as their originals, but just on a grander scale. There are some buildings in Seoul where this is done quite nicely, but the preference now is for glass and steel.

The new city hall at least won't be boring. There's always that.

Anyway, with the facade and the glass behind it, I think they were going for something like the Hearst Magazine Building in New York City. Since the facade is all that's left, I wonder if they have more freedom and space now to do something like this.

Anyway, while we're busy saving traditional structures, someone must be out there trying to save the early 20th century stuff.

This is a part of the history of Seoul. I hope that this beautiful image will continue until the next generation saw it.