The other victims of the Kwangju Uprising 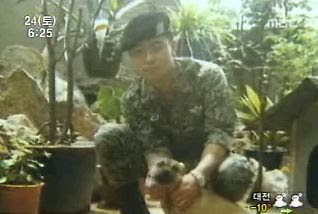 Kim Dong-kwan when he was in the military.


Over a month ago the Joongang Ilbo printed an article about a former paratrooper who took part in the Kwangju Uprising.


A court has ordered a veterans’ office to grant “National Meritorious Person” status to a 51-year-old man who has suffered from schizophrenia since he served as a paratrooper cracking down on demonstrators during the Gwangju Democratization Movement in 1980.

Kim Dong-kwan was a student activist at Korea University’s College of Political Science and Economics in the late 1970s and was strongly opposed to then-President Park Chung Hee’s Yusin [“revitalizing reform”] policy. However, he was conscripted into the Third Special Airborne Force Brigade in 1979 and later sent to Gwangju, in a drive to suppress massive civil protests that broke out from May 18 to May 27, 1980. He was issued live ammunition to fire at protesters, and sometimes had to dig graves to bury the dead. He was bullied and beaten up by his fellow soldiers when he resisted using his weapon, Kim insisted.

Friends say the experience changed Kim forever. Once known to friends as an “outgoing and friendly college student,” Kim was diagnosed with schizophrenia four months after he was discharged from the military in November 1981. Friends say he has lived with deep guilt about his actions and has been in psychiatric treatment for 29 years. He was frequently haunted by hallucinations of neighbors berating him for gunning down innocent civilians. His condition left him unable to sustain a normal life.

In 2002, after failing to have him recognized as a National Meritorious Person, his wife divorced him, "fearing the stigma that could be passed to the couple’s then-5-year-old son."

His friends and former college classmates decided to help him and petitioned the Ministry of Patriots and Veterans Affairs' Office in Suwon to recognize him. When this failed (they couldn't prove his condition was due to his military service) they took it to court. His friend Jeon Seong took the lead, as he


had once been a student activist and participated in the same circle as Kim. He was arrested in October 1980 for organizing student demonstrations in Seoul to publicize the government’s actions in Gwangju. Jeon later was granted May 18 Movement Meritorious Person status in 2000 and won 40 million won in compensation. Jeon used the money to study for the national bar exam, which he successfully passed in 2004. [...]

To win the case, the friends needed clear evidence proving Kim was actually at the scene. Finally, they found a senior soldier who was sent to Gwangju with him. However, when they asked him to testify, he was reluctant to get involved.[...] But on Dec. 19 - the last day of witness testimony - the soldier surprised everybody by appearing in court as a witness. He presented to the judge a photograph of Kim and himself taken in front of South Jeolla Provincial Government Building. On Jan. 23, the court ordered the district office to give Kim National Meritorious Person status.

This story goes to show that there were more victims than the protesters and unlucky bystanders during the uprising, and how unhelpful it can be to portray the paratroopers as being uniformly barbaric. While I don't think anyone has ever adequately explained the brutality of the soldiers on the first day of the protests, by the second and third days, as more troops were sent to Kwangju, the new arrivals were faced with angry crowds and had no idea of what was motivating their anger. It such a situation, it's not hard to see why the new arrivals would justifiably be angry at the violence of the protesters, being ignorant of their "fury over [other units'] inhumane violence" (as Choi Jungwoon put it) on the first day. In the end, the blame lies with the authorities who ordered the troops into action on May 18, orders which had been questioned by the commanding officer on the ground (who was eventually removed from command several days into the uprising). His protest was meaningless, however, because the orders were coming straight from Seoul, circumventing the chain of command. This is likely the reason why 12 of the 23 soldiers who died during the uprising were killed in friendly fire incidents - the left hand didn't know what the right hand was doing, and other units were mistaken for the citizen army. When I asked a former air force officer what he thought about this circumvention of the chain of command, he told me, "That's one of the reasons I quit the air force."

The photo above is a still taken from this news report.
Posted by matt at 8:32 AM