Careful with that LPG, 유진

In late October of last year, a tented food stall appeared on the corner near my house, selling squid and beondaegi, among other things. It can be seen below: 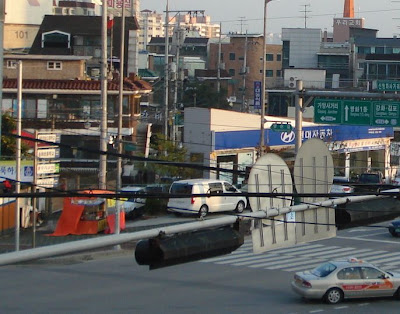 Strangely, not too long after appeared, it seemed to have been knocked down. The concrete pylons next to the tent had been knocked over too. (No, it wouldn't have been gangsters; my neighbourhood is known to be gangster-free; it's the police who tell stall owners to move on (occasionally)). 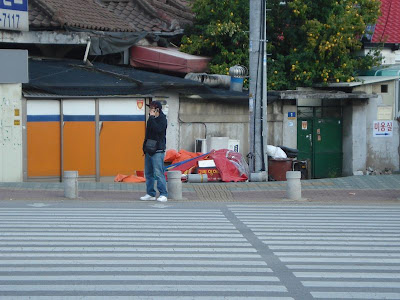 At any rate, the stall was put up again and was open in the evenings, and closed in the mornings and afternoons (a thick rubber band was tied around the tent part and kept it tight to the trailer base). The man running it never seemed to get much business.

In mid-January I walked out to see this (having walked past a broken jar of beondaegi thrown 10 meters down the street). 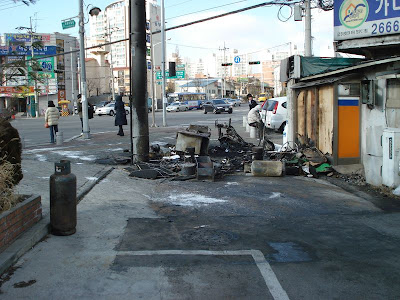 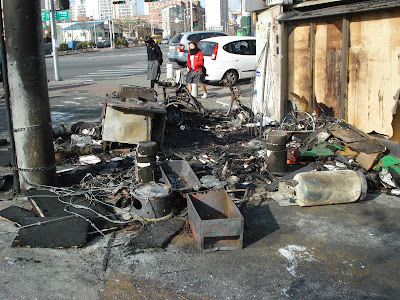 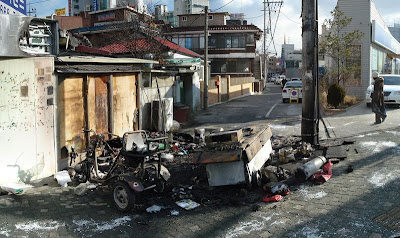 As you can see above, the building to the left has windows boarded up and part of the sign is melted, suggesting that flames must have gone up quite high. The hydro pole is also blackened. Strangely, none of the other buildings showed any signs of damage. I can only assume that there must have been an explosion of some sort; look at the damage done to the concrete pylons below: 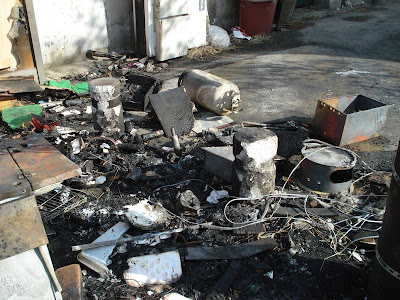 Also, a mere fire does not rip a metal tray in half: 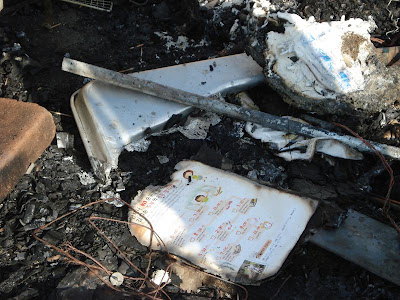 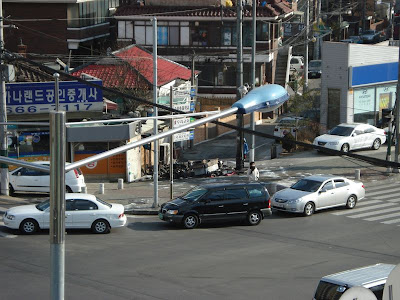 I'm not really sure what happened, or whether anyone was hurt. The burned carcass of the stall (which attracted surprised looks from most people who walked by) remained there for a day or two before it was cleaned up.

Banghwa-dong has seen problems with LPG before - in May, 2006, an LPG explosion destroyed a store in Bangsin Market, as this news report reveals.
Posted by matt at 8:36 AM

I'm actually a bit relieved that this is what it was (though I hope the owner wasn't hurt). From the title, I was afraid it was about the danger of LPG-powered vehicles, of which is a car we purchased for my company.

I had checked on the safety of LPG before buying, but found nothing suggesting that properly manufactured vehicles were dangerous. I do realize that LPG tanks in makeshift businesses are an entirely different matter.

This reminds me of a fire in my old neighborhood. Two foreigners that it was b.s. to have to buy plastic bags for their trash, so they chose to burn it instead. One day the fire got out of control and burned down the whole 1940s or 1950s structure (which had a lot of wood to it).

Those tanks have always made me a tad nervous.