Via Brian in Jeollanam-do and Chris in South Korea, the Hankyoreh and Korea Times are reporting that Google has decided to force users of Youtube in Korea to use the real name system to post on the site. The Times begins with this:

South Korea is looking at more ways to impose rules on Internet users and insisted that Google should behave in order to stay here. And after months of hesitation, the search giant now appears ready to bend and bow. [... T]he company could ill-afford to go half-way in its commitment to Korea, which represents one of the most advanced Internet markets in the world.

Does that sound anything like the North Korean novel B.R. Myers describes here?

The novel "Barrel of a Gun," for example, released in 2003, is an official "historical" work about how Mr. Kim's iron resolve forced the Clinton administration to its knees in 1998. "Excellency," the American negotiator says at the end of the book, groveling shamelessly before his North Korean counterpart, "you are also a mighty superpower."
"I like the sound of that," the North Korean answers with a chuckle and a sharp look.

But I digress. The article continues:

According to the company, Korean users of ... YouTube will be required to make verifiable real-name registrations for uploading content and posting comments starting on April 1. It is the first time in any country that Google is forcing users to submit verifiable personal information, company officials said.

In a much-debated decision last year, the Korea Communications Commission (KCC) ... mandated that all Internet sites with more than 100,000 visitors impose real-name registrations for their message boards and chat rooms from April this year.

Lovely. The Hankyoreh's (sub) title isn't surprising: "Google Korea submits to government’s trend towards curbing Internet freedoms by implementing a “real name system.”" I'd have to agree with the Hani's take on this; the "real name system" is a 'trend' going back six years now. This article notes that the government first attempted to phase in a real-name system in 2003 but it met with too much opposition. A March 2003 Joongang Ilbo editorial announced that the paper had decided to launch a campaign to "create a safe and sound Internet."

The first thing Internet users can do is participate in a movement to use real names in cyberspace. [...] Contamination of cyberspace has resulted mainly from the lack of etiquette in the use of this modern technology.

Another editorial from June of that year titled "Keeping Net free of trash" said, "We commend the government for its decision to require Internet users in the private and public sectors to use their real names when leaving messages on Internet bulletin boards." This didn't prove popular, though proponents tried to use cyber-crime figures to bolster their arguments:

The number of cyber crimes has swollen 500 times during the last five years, according to data released yesterday by the Korean National Policy Agency. In 1997, a total of 121 cyber crimes were reported; more than 60,000 cases were cited last year.

This article gives different figures for 2002:

It was not crime statistics that gave those supporting a real name system the ammunition they needed, however. No, it turned out to be an unattended pile of dog crap on the subway - or netizen reaction to a photo of it, rather - that led to the issue being discussed incessantly in the media. 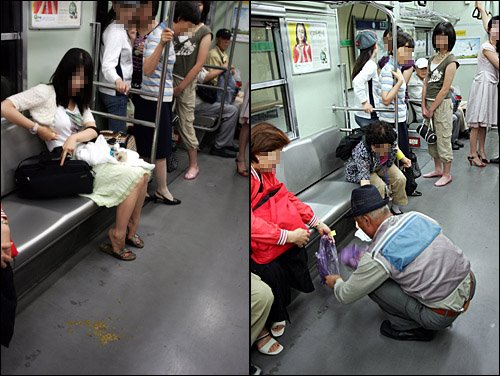 On June 6, 2005 a young woman on Seoul's Line 2 subway had a dog with her when it shat on floor. As blogger Don Park described it,

When nearby elders told her to clean up the mess, she basically told them to fuck off. A nearby enraged netizen then took pictures of her and posted it, without any masking, on a popular website which started a nationwide witchhunt.

It was Don Park's [no longer available] post that led to the U.S. blogosphere discussing the case, with the uproar eventually making it to the Washington Post. I wrote about this process in the post Dog 'Poop' Girl Redux, soon after starting this blog, as well as several other posts looking at the reaction to the event within Korea. These posts lay out the discussion of the new term 'cyber terror' and the proposed solution to it - the resurrected idea of a real name system:

By September 2005, according to the Chosun Ilbo, "The Ministry of Information and Communication [had] decided to require large portal sites like Naver, Daum, Nate and Yahoo to confirm the real name of Internet users when they post messages on discussion forums and similar sites." It wasn't until July 2006 that anything was really done, however:

In a bid to prevent escalating online slander and privacy violations under cover of anonymity, the government and ruling Uri Party on Friday decided to require Internet users to use their real names when they post comments on some portals or media websites. The regulations will be submitted to the National Assembly for implementation next year. It would require Internet users to undergo an identity check before posting comments online, but they can then still use their sign-in name or alias to sign the message.

As this article tells us, the MIC began testing the system on Naver and Daum on July 1, 2007, but the portals saw nothing but nastiness directed at the Korean missionaries taken hostage in Afghanistan; the MIC said it would just take a little time to iron out and ignored this (and didn't seem too concerned about possible identity theft), fully implementing the system on July 30, 2007.

[T]he MIC expanded the real-name formula to other frequently visited Web sites on Monday in addition to Naver and Daum. As a result, those who log onto Web sites of 1,150 public agencies are required to present their identification information before writing any article.

The system also applies to 21 Internet portals where more than 300,000 visit everyday and 14 online media sites of which daily visitors are upside of 200,000. [...] The relevant law stipulates that the MIC can oblige the application of the real-name system to smaller Web sites where more than 100,000 travel per day.

This application of the system to 100,000-visitor-a-day websites is what begins April 1, and is what Youtube has been caught up in.

While the early discussions of this system began in 2003 and 2005, when the Roh government and Uri party were in control, it's worth remembering that it was eventually implemented under the GNP, who have been consistently caught unaware by netizens, from the (initially) internet-organized candlelight 'vigils' and Roh's victory in 2002, to the mad cow protests of 2008. The system has been used to investigate those who had pissed off the government in little ways (the high school kid who posted the petition to impeach Lee Myung-bak last May comes to mind) and large (Minerva), but is always couched in terms of preventing cyber-bullying and securing 'human rights'; last fall the GNP tried to use Choi Jin-sil's suicide as an excuse to pass more legislation (though the opposition pointed out that three laws already exist to punish cyber-bullying). Of course, I might be more sympathetic to the Democratic Party if, when they say that such legislation is “a threat to prevent the forming of public opinion against the government by monitoring and control of cyberspace," I didn't remember quite well the way they, as Uri Party, were happy to block a wide range of foreign blogs in 2004 in order to keep Koreans from watching the video of Kim Sun-il being beheaded (and many other progressives were happy to join them). I'm certain both sides of the political spectrum would opt to increase control over the internet if they could get away with it. As Gregory Henderson put it:

In the non-socialist world, I have so far sensed nothing comparable to the South Korean shadowing of the private by the public sphere.

A little off topic, but it was interesting that in 2005 the Donga Ilbo would refer to cyber bullies as "techno rioters," considering the events of the summer of 2008. This was also quite interesting:

Netizens should change their ways of thinking; they should take voluntary action, such as Internet moral conduct movements, to prevent further damage.

Compare this to Lee Eun-ung, of Anti-English Spectrum:

Only if foreign teachers, sensing the stinging glances of Korean citizens, formulate their own measures to eradicate illegal teachers will their petition earn the agreement of many Koreans.

Which then reminds me of North Korean self-criticism sessions, such as in the documentary "North Korea: A Day in the Life," where factory workers admit their faults and promise to work harder.

On the topic of internet censorship, Roboseyo's post on the topic is well worth reading.

as I think about it more, I think that free speech is, more than anything else, one of the best tools to keep those in power accountable, and as such, any time the government especially, but also other folks in power (all the way down to Joe Zenkimchi's boss) use their power to gag someone's freedom to speak the truth, I get nervous.

If that means internet trolls have leeway to be jerk-faces, I guess that's the cost...but people aren't idiots, and assuming that people reading webpages are too stupid to recognize they're being trolled is a bit insulting, too, isn't it?

Not that I'll start allowing trolls to post on my blog(s), but yeah. I think a bit of self-criticism and a bit of net-savvyness education would end off with everyone in a better situation than simply micro-managing every comment that upsets a fella with power.

I like the system YouTube has, where comments can be given thumbs up and thumbs down, and you can adjust settings to hide comments with more than two, five, or ten thumbs downs. I'd like to see that kind of system become more wide-spread.

Interesting post. It's noteworthy the extent to which the notion of a right to anonymity has taken a massive knocking globally in recent years. Incidentally I believe even the Federalist Papers were written under fictitious names were they not? Not sure I agree with Roboseyo about the Youtube system though. I think these two cartoons at XKCD sum up the state of comments there pretty well...
http://xkcd.com/481/
http://xkcd.com/202/

Things need to change in South Korea. Freedom of speech? It's 2009... this sort of stuff should be history by now.. Basic rights the people should have... shame on the South Korean government and especially Lee Myung Bak.