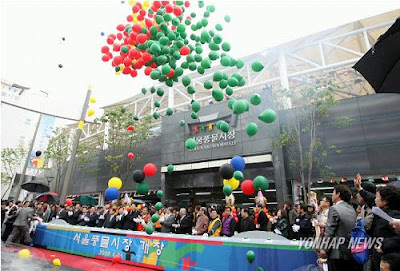 (Photo)
The Seoul Folk Flea Market opened on April 26, and a few articles have mentioned this. This is supposed to be the final location for the merchants displaced by the Cheonggyecheon restoration project which I looked at here.

A Korea Times article on the market can be found here, where you can see several photos of the market. We're told that

The Hwanghak-dong flea market originated in the early 1950s when secondhand goods dealers put various items on sale. In 1973, when the Cheonggye Stream was covered to make for an elevated expressway, Hwanghak-dong grew into a center for secondhand goods. Then when the stream was reclaimed in 2003, the flea market moved to the now-demolished Dongdaemun Baseball Stadium. With plans to turn the Dongdaemun area into a park, the market once again moved to Sinseol-dong, not far from Cheonggye Stream. To celebrate the new site, the market gave itself the name Seoul Flea Market. The market has some 894 shops in its two-story site. 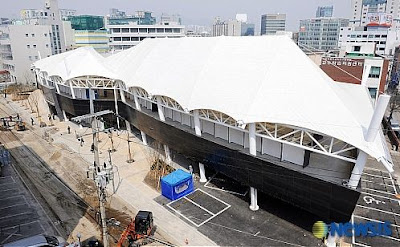 (Photo)
You can see the location of the Flea Market at top right: 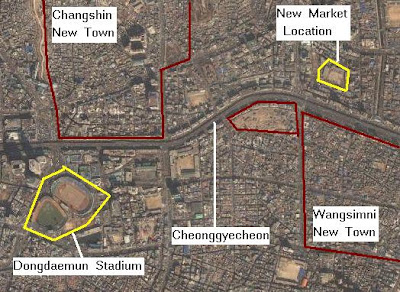 The Korea Herald also has a lengthy article titled "Flea market blossoms under new roof," from May 6, 2008.

The Seoul Folk Flea Market, which recently opened under a new roof near Sinseol-dong subway station (Lines No. 1 and 2), breathes the typical adventurer spirit. It has everything from craftwork, decorative stones and specialties from different regions to adult toys, electronics, food courts, clothing and ancient music records.

The new white two-storey building is the third downtown home for used-good traders, who originally hawked their wares on the streets of Cheonggyecheon for decades. Some 73,000 street vendors were forced to leave Cheonggyecheon in 2003 as the city government launched a project to restore the stream. Those from the "dokkaebi sijang" or "goblin's market" were relocated in Dongdaemun Stadium in early 2004, while others nestled in new buildings along the Cheonggye Stream.

Four years later, as the city now plans to tear down the stadium to build a design park there, nearly 900 stores have moved to an old school site in Sinseol-dong, two metro stations away from Dongdaemun. There were angry protests against the forced removal from the stadium, resulting in injuries during a scuffle with people hired by the city government. A handful of shopkeepers are still opposing the move but most have settled in. "The new facility is nice and clean but the location is bad," said Hong Il-moon, who has been selling Chinese antiques for 20 years. "There aren't many passersby and we have little parking space." 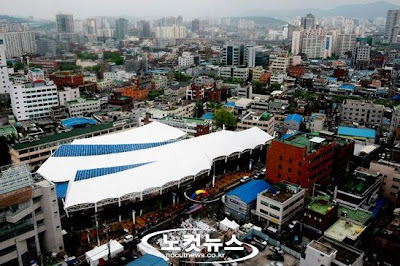 Whereas Dongdaemun Stadium was in the heart of the city's major shopping district, connected to four subway lines and dozens of buses, the new venue is in the middle of a residential block, a seven-minute walk down the alleys from Sinseol-dong station Exit No. 10.

"It's a rather closed space with limited access from the people as we no longer have the random spread of vendors like the old times," said Cha Sung-sook, who sells hair pins and other accessories. 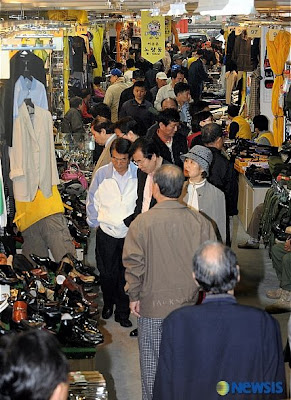 Still, the city government is upbeat about making the market a major international tourist attraction. "We will make the Seoul Folk Flea Market the city's leading tourist spot," Mayor Oh Se-hoon said at the market's opening on April 26. "(The city) will provide the merchants with low-interest loans and encourage sales by placing marketing experts."

Seoul City spent over 8 billion won ($8 million) on the structure, which has canopies over a steel framework painted white. It threw auction events featuring celebrities for the opening and placed promotional banners and stickers on buses. A tourist information booth within the market is scheduled to open on May 15.

The Seoul Folk Flea Market is open between 11 a.m. and 7 p.m. The market is a hundred meters from the Hwanghakgyo bridge across Cheonggyecheon.

It's nice to see that the city is supporting it (at least for now), even though it isn't in the best location. It seems they're being treated much better than when they were moved to Dongdaemun Stadium. Worth noting are those figures: 73,000 removed in 2003, and less than 900 are now in the flea market. I would imagine the city will support only a sanitized history of the merchants' movement. The Herald certainly does, with this comment: "There were angry protests against the forced removal from the stadium, resulting in injuries during a scuffle with people hired by the city government." Those "people hired by the government" are otherwise known as gangsters, or thugs. In the final photo of the Times article, a display with photos of the market's past is shown. I wonder if there are any photos of the events of November 30, 2003?

(More photos of the market can be found here).
Posted by matt at 1:20 AM