Links to essays about the Kwangju Uprising

[Update - The May 18th Memorial Foundation website has an E-book titled "We Saw" with lots of photos that can be found under "Information and Resources", and then "Publications". What's notable is that the dates and photographers are listed with them.]

Again, I'll start with Tim Warnberg's 1987 article "The Kwangju Uprising: An Inside View," which is an excellent account of the uprising by a Peace Corps Volunteer in the city at the time. It can be downloaded here (scroll down to bottom left and wait 24 seconds for the 'download' button to appear).

Neoliberalism and the Gwangju Uprising by Georgy Katsiaficas, uses declassified cables to examine how the U.S. pressured the Korean government to liberalize its economy (instead of its political system) in the wake of the Kwangju Uprising. I think it's useful to look at the economic motivations the US had for supporting Chun Doo-hwan, especially when looked at alongside security and geo-political considerations. The essay focuses only on the economic considerations, however, and tries to pin almost all of the negative things Chun did in 1980 (firing and imprisoning thousands of people, the purification camps, etc.) on the requirement of American businesses for a "stable structure" before investing. In my mind there's a little too much coincidence and not enough causation proven in the essay.

During the uprising, I think that Chun did his best to make it look like the US was supporting him. For example, he agreed to distribute fliers with the US position (calling for calm on both sides) in Kwangju, but instead broadcast that the US had approved the initial crackdown. He also asked the US to allow him to move the 20th division to Kwangju when it was not necessary (it had been removed from CFC control on May 16, when General Wickham was in the US) . With this in mind, I'm interested in reading Donald Sohn’s essay “Chun Doo Hwan’s Manipulation of the Kwangju Popular Uprising”, which can be found here.

Mark Peterson wrote about a meeting between US citizens in Korea and the embassy in 1980 where Horace G. Underwood warned that “Chun is wrapping himself in the American flag. If the United States doesn’t do something about it, it will have ‘hell to pay’ in the future.”

I couldn't help but think of this quote when I saw a powerpoint presentation Katsiaficas did. Though it uses some quotes in misleading ways, it also has scans of some of the cables Ambassador Gleysteen sent to Washington. I found one of them very interesting. On June 6, ten days after the end of the uprising, he wrote

US businessmen are cautious over the long-term stability of the ROK but less concerned over democratic development. If the military leadership can develop an apparently stable structure and reinvigorate the economy, then US business and banking circles will be prepared to go back to business as usual.

The missionary community, in contrast, is acutely depressed by recent developments, concerned over the possible mistreatment of the numerous people arrested, and critical – often bitterly critical – of the US for not having in some way prevented these developments. They are quick to bring to the embassy tales of rising anti-American sentiment, are not taken with moves we have already made, and cannot be counted on for support in our difficult maneuverings over the next few months. More numerous and more vocal than those of the business community, we would expect that complaints reaching the department will be heavily weighted on the side of the church-related American residents of the ROK.

In other words, the embassy considered the missionaries, who were warning them of rising anti-Americanism, to be a pain in the ass. But hey, the Japanese in Korea found American missionaries to be pains in the ass as well. Underwood turned out to be very correct.

Given the extent of the insurrection, the death toll was remarkably low--a fact that reflects the ROK government's efforts to minimize casualties. Those who continue to distort what happened at Kwangju should have their motives questioned. They seem determined to prevent the wounds from healing and to drive a wedge between the U.S. and the Korean people. The ROK government, by contrast, has been trying to put the Kwangju incident to rest and to heal the country's physical and emotional wounds.

"Those" who were continuing to distort what happened was likely aimed at American activists and academics. The paper above is interesting to read because it is obviously written during the fifth republic, lauding the military and blaming the protesters as it does (a view many people who are only vaguely familiar with the uprising continue to hold). The 1987 book The Kwangju Uprising: Shadows Over the Regime in South Korea provides one of the likely sources for the above paper, namely the "Report on the Kwangju Incident to the National Assembly National Defense Committee, June 7, 1985." For example:

At last, demonstrators seized weapons and armed themselves with weapons, turning Kwangju into a state of lawlessness and anarchy as the city's administrative functions were paralyzed.

You know, it seems like something is missing. Like, oh, I don't know, the fact that the soldiers in the photo below would open fire with M16s on the crowd within an hour of this photo being taken? 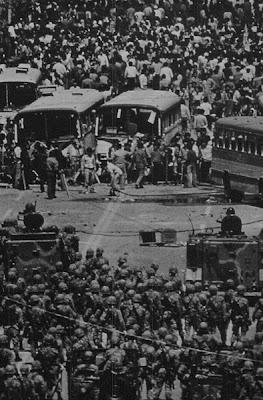 It wasn't exactly "a state of lawlessness and anarchy" either, as stores began to reopen after the troops retreated from the city on May 21, and people volunteered their time or food to help feed the citizens' army. Others helped clean the streets and collect weapons, and most importantly, hundreds of people donated blood to the hospitals. As Betts Huntley, who worked at the Kwangju Christian Hospital put it on the 21st, the day of the shooting, "The hospital is swamped with people trying to give blood. They're turning people away."

Of course, the first day after the military retreat looked chaotic, and it was that time which was broadcast by the three US networks on May 22 (I've looked at those clips before). Note that the final clip - the NBC broadcast - describes “citizens wounded evidently at random by other citizens”. The correspondent was on the outskirts of the city with the army, and was likely given this piece of disinformation.

Last but not least, here you can find the essay "Women's Role and Experiences During the May 18 Uprising". Two of the stories found in the essay appear in this post, but one story, that of a high school girl who was the only survivor of an attack on a bus that left 17 dead, I've never read before. I'll look at that attack in more detail soon.
Posted by matt at 3:12 AM