It's on the highway that runs from close to Namyangju to Seoraksan, at a rest stop about an hour from Sokcho. There is a sculpture park outside, as well as gallery inside of carvings. The very prudish may want to avert their eyes from the following photos. 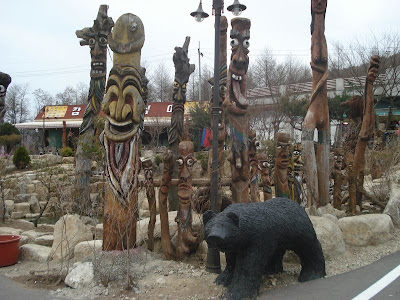 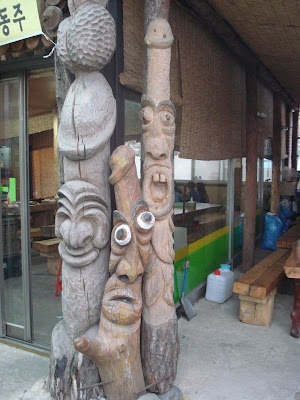 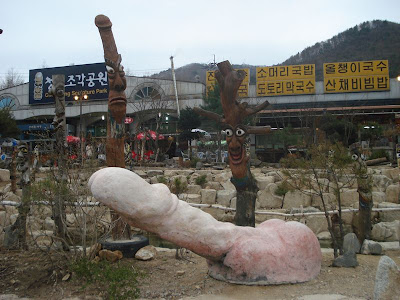 It was certainly amusing, through western eyes, when a car pulled up and children got out and immediately ran to and began climbing on the giant penis. 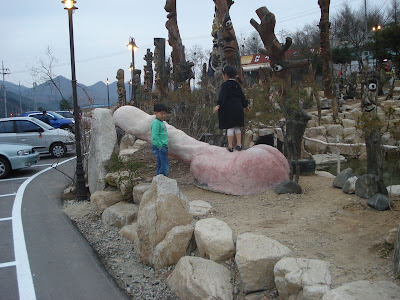 Their mother took photos of them and then had them pose on the bear seen in the first photo. What's amusing to me, of course, is that the average North American mother would likely freak out and yell, "Get off of that - NOW!" Many of the people at the rest stop stood on front of the sculptures and took photos. People were not afraid to touch the giant penis. In the gallery people pointed and chuckled at some of the sculptures.

I couldn't help but remember this experience (from two weeks ago) when I read this article.

According to the Chosun Ilbo, the incident began when seven members of Gyeonggi provincial council visited the headquarters of the world's largest sports utilities maker Nike in Portland, USA, early March as part of their efforts to forge ties between Korea and the US. While there, two council members reportedly touched the breasts and private parts of a female statue. Witnesses said they even tried to put their hands in the statue's crotch while giggling. This left many of the workers there feeling horrified.[...]

The two shunned members sent an abrupt apology email to Nike saying if any inappropriate demeanor had taken place, it was never on purpose but due to a difference in cultures. They later claimed that they may have "leaned toward the statue'', but nothing like what was mentioned in Nike's complaints. "We did take pictures but no such dramatic things happened. It was miscommunication stemming from a difference between cultures. We just made an apology because Nike seemed to want it, that's all,'' a council member said.

It wouldn't surprise me if it did indeed happen as the Nike people saw it, but the Koreans involved simply didn't perceive it in the same way at all. Hoping to restore their working relationship, the face saving gesture would naturally follow. Hopefully next time the Korean delegates will remember that in America, some people project their prudishness and fear of sex onto statues.

Hmmm. Of course, one wouldn't be surprised if children of any nationality freaked out about nude statues, but did you see ajeoshis jumping upon the statues in Jeju Love Park? It's the childish behavior coming from adults (legislators, no less) that I think the Nike people rather understandably objected to. I think it's not just prudish Americans, but also lots of Koreans who agree that's just weird, pathetic behaviour.

(Or such is my impression from recent discussions I've had.)