A sea of red flames

No, I'm not talking about the North Korean threat back in 1994 to turn Seoul into a "Sea of Fire". I have something more recent in mind. 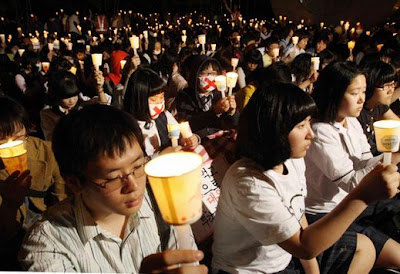 Students at a candlelit vigil protesting US beef imports, May 6
I have to wonder to what degree high school students, most of whom have just finished mid-term exams, are informed of the issues surrounding this. Is this just an excuse to skip school after being cooped up studying for the past few weeks? How much of this, for high school students, is motivated by anti-American sentiment, an inverse of the "go Korea!" sentiment of the World Cup street cheering of 2002 and 2006? Gord Sellar commented, after attending the first two protests, that the second protest "turned the participants into a mere audience." 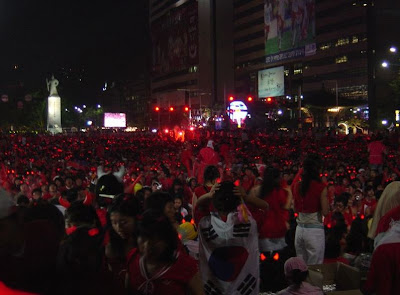 Young people cheering the Korean soccer team, June 23, 2006
While some may say that the public are being mislead by an anti-American news media, and others may point out there are legitimate reasons for concern, I sometimes wonder if it's the candle makers (or flashing-horn-headset makers) who are the ones setting the agenda...

Rub a dub dub,
Three men in a rub n' tug;
And who do you think they be?
The muckraker, the lawmaker,
The candlestick-maker;
Turn 'em out, knaves all three!

Yes, I'm poking a bit of fun. But the prosecution frowns upon fun, and wants to add "mad cow horror story maker" to the list above, as the Hankyoreh tells us:

The national prosecution and police say they are going to criminally prosecute people involved in spreading so-called “mad cow horror stories” (gwangubyeong goedam) on the Internet, in addition to prosecuting the organizers of candlelight protests against imports of American beef.

Top ranking officials at the Supreme Prosecutor General’s Office held an unscheduled meeting on May 6 to discuss ways to prosecute “horror stories (goedam) on the Internet.”

“The number of horror stories on the Internet is reaching serious proportions and we can’t just sit around and do nothing,” said one prosecutor. “We’re going to look at what’s going on and see if there are any issues.”

A high-ranking police official, said the police see it as a “serious problem” that there is “inaccurate information about American beef and criticism of government policy that is not factual overflowing” on the Internet.

Anyways, I do wonder what these "mad cow horror stories" are like. Are they something like this?

I heard this conversation on the bus today:

Hey, you know that girl I told you about in my class, the one who was crying after she saw her test scores?
Yeah.
Well after school my friends saw her eat a burger at Burger King.
So?
Guess what happened?
What?
They found her in the parking lot of her apartment building that night. She was lying on the ground covered in blood, and people could see her brains. They looked like...
What??
A sponge.
Wow.
She totally died of mad cow disease.

That's what I heard on the bus today.

I'm curious as to who exactly is writing these stories, and sending those text messages. I'd tend to think they're students, but who knows? How will the writers of these stories be punished? Perhaps the police could force them to stay indoors, sit in one spot for hours, and deprive them of sleep until they're 18.
Posted by matt at 2:55 AM

It makes one wonder what would happen to the author of, say, a science fiction story discussing these issues would be treated.

Not that I'm interested in doing it, for various reasons including in good conscience I can't ignore how much exaggeration it would require, or the fact that the actual scientists whose work is being discussed say it's been distorted beyond recognition...

... but it makes one wonder how futuristic narratives on the subject, wholly fictional, would be received, were the prominently published.

I've often thought about what would happen if you took some of the more unpleasant currents here and made them more prominent in a story set in the future. It wouldn't be pretty, but it'd certainly make for an interesting setting.

I was prompted to think about it after a conversation I had with a friend of a friend who turned out to be an assistant director on 'The Host'. He told me he was interested in science fiction, really liked 'Children of Men' and would love to make a dystopian film, but that it would never do well in Korea. I'd never thought about it before he said it, but immediately agreed with him, especially considering how many people last summer told me "D-war is my favorite movie." When I asked him, with a smile on my face, what he thought of that movie, he told me he usually refused to talk about it because he would get attacked by people for his opinion (or be accused of otherwise ruining the kibun).

I am a publisher of THE EAST; the only English newspaper, which is mainly focused on the East Asian information (at the beginning of every month, more than 12,000 free copies are distributed throughout the London area, particularly, where East Asian Networks are established).

I looked at your blog the other day and have been wondering if there would be any chance that we could publish some of your interesting articles on the paper.
We think some of your blog articles should be very helpful to the Westners who are interested in Asian Culture.
The East cannot afford to pay for your articles right now (as we are non-profitable organisation). However, if you wish, we can still offer you:
1. Advertising space
2. Link to THE EAST web site blog section

We look forward to hearing from you shortly.

Many thanks and kind regards,

I think it's all too easy to underestimate the political awareness of school students - I know I was pretty radical and (by my reckoning anyway) well informed when I was 15. Of course there will be kids who are just there for the hell of it, but then every protest of any size has its fair share of sightseers and hangers-on.

Anyway it's pretty clear the US beef thing is only symbolic - it looks as though most of the people there are protesting about just about every policy being pursued by 2MB. And of particular concern for the school students is the marketisation of school education under the rubric of 'school autonomy'.

Yeah... coincidentally, I'm working on a series of posts on SF in Korea, dealing with cultural reasons why the genre hasn't taken root here. I think a dystopia has a better chance of flying than a utopia, but a dystopia that was realistic by any lights other than an extreme nationalist's (ie. anything at all realistic) would be doomed. I started out thinking Korean SF is all dystopian, but then I noticed glimmers of nationalist(-socialist) utopianism everywhere.

I think it'd work better if he pushed the envelope on one of the other fantastical genres until some of it spilled over into SF. For example, Hwa San Go does that. I've got a novel needing a redraft that does something similar with a ghost story -- told by the ghost -- about a foreigner who dies in Boseong and finds himself stuck there. I can see that doing a LOT better than the SFnal things I've written that were set in Korea, like the tyrannical life-extension chaebol state set up in a still-divided North Korea; or the superheroes story set in the South; or the stand-alone comfort-women ghost story. (Ha, still, if your FOAF is ever looking for a speculative novel or tale to turn into a film, pass him my name! Seriously!)

As for what Owen says, there's sense there, but I want to point out that it wasn't mostly kids. I was there, I walked around extensively on both Friday and Saturday. There were teens on the microphone on the Saturday, but the majority of people there looked college-aged or older. The whole "it was manipulated kids!" angle is a transparent move to disredit the protests, and it hit me how 3rd-world, yeah, really 3rd-world, the media here is when I saw that in the news. I "knew" that, but I hadn't experienced it first hand.