Two top officials of an unauthorized migrants' union will be deported next week on illegal residence charges. The Ministry of Justice announced Wednesday it arrested Nepalese Torna Limbu, 42, head of the Migrants' Trade Union, and Bangladeshi vice president, 39, identified only by his surname ― Sabur, last Friday. The two, who have been illegally residing here for 16 and 9 years, respectively, were sent to the Cheongju Detention Center in North Chungcheong Province.

Members of the union claim the arrest was made to interrupt the establishment of the foreign labors' union that has acted against the government's labor policies. The government denies the allegation, saying it was a regular search.

A statement from the KCTU suggests it may have been more than a "regular search":

Immigration officers had followed the president since the previous day when he participated in May Day activities. The vice president recognized a person who had sat nearby him at a fundraiser the week before among the officers who arrested him. That President Torna heard the officers in the van carrying him communicating consistently with those stationed near Vice President Sabur’s house and in other areas in Seoul also shows clearly that the arrests were coordinated with one another.

When the previous leaders of the Migrants' Trade Union were arrested in November, their cells had the medicine they took waiting for them, suggesting that they had been watched for some time. But no, let's trust the government when they tell us it was just a "regular search". A Chosun Ilbo article tells us that

The ministry formed a task force on May 1 and launched the first crackdown on all migrant workers without visas since the inauguration of President Lee Myung-bak in late February. The ministry plans to continue its crackdown for the next three months, and says that it will prevent illegal foreign workers from making inroads into the domestic labor market.

"We prioritize the arrest of illegal employment agents and illegal residents who overstay their visas. The foreign nationals in question have lived here for a long time. Also, they have actively participated in and organized anti-government protests,'' Kim said. [...]

The foreign labor rights group, which has failed to win legal status from the authorities, filed a suit against the government last year and the case is pending in the Supreme Court.

Apparently, criticizing justice or labor ministry policies is "anti-government." Does that mean that the Seoul High Court is also anti-government?

The Seoul High Court issued a judgement on 1 February 2007 calling for the cancellation of the rejection by the authorities of the Migrant Workers' Trade Union's Notice of Union Founding. This ruling, in effect, recognizes and thereby legalizes the MTU as a union representing the rights of all migrant workers, regardless of their status. The Ministry of Labour has appealed against this decision to the Supreme Court.

And this is why the case is still pending in the Supreme Court.

The crackdown on illegal migrants is likely to continue during the next three months since the government launched a special team this month to contain the soaring number of illegal immigrants here.

Here are the numbers of migrant workers in Korea over the last 20 years: 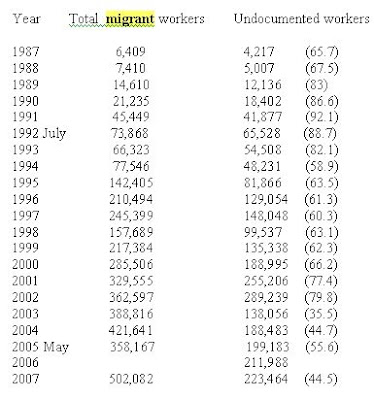 A few notes: Some of these numbers are from here. The numbers in brackets are percentages. All numbers are from December 31 of each year, unless otherwise noted. The industrial trainee system began in 1992 and ended at the end of 2006. Notice the dip in 1998 (due to the financial crisis of 1997), as well as the dip in the number of undocumented workers in 2003. In 2003 the employment permit system was put into place, which legalized around 180,000 workers (who could continue to work for a set number of years); another 27,000 left the country during an amnesty before the government began cracking down on those workers who could not get a permit (anyone who had lived in Korea more than 4 years).

Needless to say, the numbers aren't really "soaring" (as they did from 2000 to 2002), though that hasn't stopped scaremongering before, as this Chosun Ilbo article from 2005 shows:

From next January to August, 118,519 people's visas will become invalid. If only half of them return to their home countries - as was the case this year - the number of alien laborers staying here illegally will exceed 270,000. If this estimation turns out to be true, Korea will become a lawless world for migrant workers, and governmental policies will cease to be binding.

It's all a bit ridiculous, considering the number of undocumented workers had exceeded 300,000 in 2003, prior to the legalization of more than half of that number of workers, and governmental policies did not cease to be binding. Crackdowns certainly do net a large number of workers, as this February 2008 Joongang Ilbo article relates:

Taking a look at the numbers in the chart above makes it pretty clear which tactic - crackdown or legalization - has decreased the greatest number of undocumented workers here.
Posted by matt at 3:03 AM

My root disagreement with you, I think, is that I believe every country has the right to control it's borders, and allow or deny non-citizens entry. It's one of the basic definitions of sovereignty.

Many -most- things about their general cause is right. Migrant workers should be treated with dignity, and Korea is wrong when it does not.

However, Korea or any nation has every right to deport any non-citizen it desires to do so to. Period.