Another brick from the wall.

A few weeks ago the merchants displaced (once again) by the destruction of the stadiums at Dongdaemun were moved into a new Folk Flea Market. Now the Korea Times reports on another step taken towards the new Dongdaemun Design Park.

Dongdaemun Stadium, the nation's first modern sports facility, is fading from Korea's sports history ― the demolition of the football stadium began Wednesday following that of the baseball stadium last month. 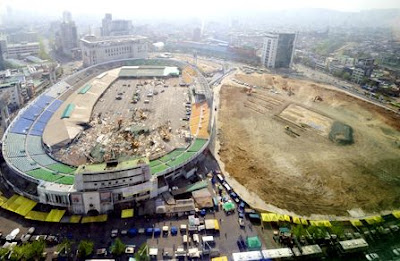 The former baseball stadium is on the right.
Built in 1926 during Japanese colonial rule, it was the symbol of Korea's modern sports, with various international matches and sports events held there until the Jamsil Sports Complex took over the role in the mid 1980s. [...] The aged football stadium was closed in March 2003 and used as a parking lot and folk market. Matches were held at the baseball stadium until recently, but very rarely. 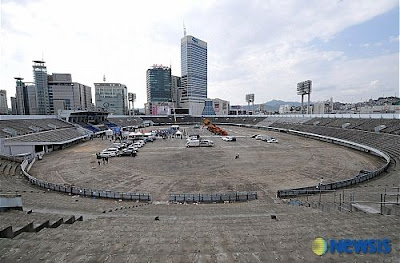 Ahead of the destruction of the football stadium, a Goodbye, Dongdaemun Stadium'' ceremony was held. Watching video clips featuring the stadium's past, present and future, city officials and some 30 former national football team members bade farewell to the sports arena. The dignitaries kicked footballs, the last ones in the stadium ― and the ceremony ended with the removal of its huge clock. 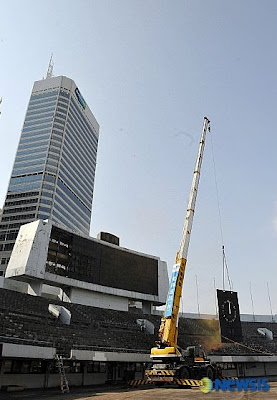 A video can be found here.

While on the topic of redevelopment, Kevin's Walk has photos of demolition and construction in another neighbourhood.
Posted by matt at 1:46 AM