[Update] A student offered the opinion (regarding smearing cake) that cake isn't even liked all that much by many people, and that it serves a more ceremonial function at birthday parties; it's main purpose is to look good. I couldn't help but think of food used during chesa, some of which is left behind. Interesting. Another student's comments reminded me that other than sweets like yeot or yakgwa, intensely sweet desserts or candies haven't traditionally been part of the Korean diet, though Haitai Caramels have been around for quite a while. The following ad is from 1960: 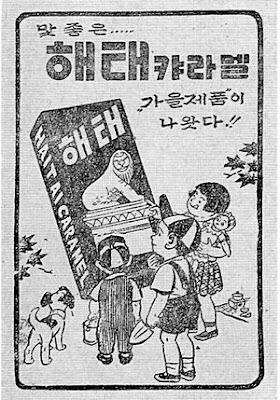 A little while ago, Kevin at Big Hominid wrote about his students' reaction to pop-tarts and discussed the differences between Korean and western tastes in sweets:

It's a strange paradox of the Korean palate that Koreans love spicy food when it comes to meals, but seem to prefer cakes and cookies that, by Western standards, are woefully bland and desiccated, bereft of all oomph.

Be sure to read the entire post. I'd have to add that, due to the Korean taste for mayonnaise and ketchup, there is quite a bit of creaminess and sweetness to be found - but not usually in places were I might expect to find it at home (salads come to mind here). I never ate mayonnaise before I came here (I've never been a condiment person) but have learned to tolerate it; ketchup on the other hand I despise.

The first dessert that comes to mind, of course, is cake. I've always thought that most western style cakes in Korean (excluding Baskin Robbins ice cream cakes) taste like airy nothingness. The problem is not with secondary characteristics such as there sometimes being cherry tomatoes on top (or sweet potato inside). The problem lies at the core - the lack of flavour and sweetness in the cake itself and the icing - so I found myself nodding in agreement with everything Kevin wrote.

There are certain cultural differences that exist regarding cake as well. I remember the first time I ate cake in Korea (a few days after first arriving here), I noticed that my Korean co-workers were eating it with chopsticks. I thought, "Well that's different." Seconds after thinking that, one of these co-workers started laughing and pointing at me, saying, "He's using a spoon! That's so funny!" (thinking of those days, I just reminisced about the first wedding I attended in Korea here. It still rates as the weirdest one I've been to, other perhaps than a traditional wedding... at Lotte World).

Several years later in an adult class, which was mostly made up of middle school girls, a student bought a cake for my birthday, and after I blew out the candles, one of the girls scooped up a bit of icing from the cake and smeared it on my cheek. I'd never seen this before, but when I asked them, "Why are you putting icing on my cheek - ok, now make both cheeks?" they told me that it was very common for people to do that at birthday parties. Since then, I've seen it happen a few times. Some of my male Korean friends have told me that they like to mash the entire cake into their friends' faces on their birthdays.

Though I may not be a big fan of western style cakes sold in Korea, I can't help but think that mashing a piece into someone's face is no way to treat a cake. On the other hand, between the amount of uneaten sidedishes that are left behind when out for dinner in restaurants, and the requirement for anju to be ordered when drinking (even if no one is hungry), enormous amounts of food get wasted in Korean restaurants to begin with (at least, you hope those uneaten side dishes are going into the garbage). So perhaps wasting pieces of cake isn't considered to be a big deal by younger people who have grown up in relative affluence. Not that wasting food doesn't happen elsewhere, of course, but I've never seen someone order food in Canada and leave it untouched without taking it home, something I've seen many times here (when people are compelled to order anju at a bar even though they might have eaten already). 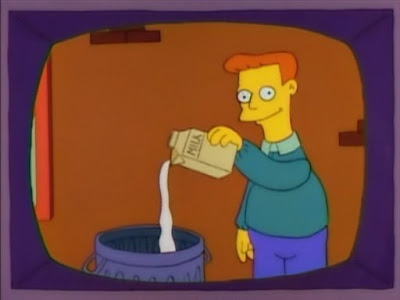 Coming up next - a new fad that is sweeping the nation:
Wasting food!
There may be another reason, which I thought of the other day. A week ago my friend and I realized we'd missed another friend's birthday, so I decided to make a cake for him the next time we went to his restaurant. I'm not sure if you can buy cake mixes at Hannam supermarket or such places, but I have a few cake mixes brought from home (and I have a small oven) so I made a cake and figured out how to make boiled icing (though the internet page with the recipe didn't emphasize the need to ice the cake as soon as you finish making the icing. As a result, the icing looked as haphazard as hardened lava, though it tasted fine. At any rate, I took it to the restaurant and pulled it out when my friend wasn't too busy with customers. After cutting it into pieces, a Korean friend who had had quite a bit to drink picked up a piece and motioned my friend over. I guess the beer had dulled my senses, because for some reason, in the second or two that this all occurred, I thought he was going to feed it to him (as in 'shove it in his mouth'). But no. Instead he shoved it into his face, it fell on the floor, and my drunken friend fell forward and spilled beer everywhere, apparently sending some onto the next table. Now, seeing as this was not a cake you could buy, I would imagine, anywhere in Korea, and seeing it was something I had made myself, I wasn't entirely happy that he'd basically just tossed a piece away (I probably would have been less happy at that moment if I'd noticed that he'd spilled beer onto the plate the cake was on, but a friend quickly dumped the beer out before anyone noticed, only telling me about it later). Now, at any birthday party I've seen happen at my friend's restaurant, people almost always share cake with the other customers. Since we'd annoyed the people at the next table, my friend gave them some cake to make amends, and I soon realized that, thought I'd made the cake for his (late) birthday, he hadn't even had a piece yet, so I managed to secure a tiny piece for him. I'm glad he liked it, but I wish he'd had more than just a spoonful.

The point of all this? I think it's pretty rare for Koreans to make cakes themselves, so the cake that gets smeared on people has been purchased somewhere. From the experience I had, the question that arises is this: If people normally made their own cakes here, would they be as ready to waste their own handiwork? Or can smearing cake on people's faces be just be seen as an aspect of the large scale waste of food that goes on in Korea to begin with?
Posted by matt at 1:04 AM

I am Korean,
And I know that we do have different tastes in food.
But, there are Koreans who enjoy baking cakes, and the smashing cakes into faces is also done in the U.S. quite often.