The death toll of those injured in the Kwangju Uprising

I just noticed this article translated over at Korea Beat, misleadingly titled "10% of People Injured in Gwangju Massacre Have Committed Suicide". Some excerpts:

Besides suicide, 34 died of disease, 26 of traffic accidents, and 6 of violence. Alcohol abuse, disease, and despair with life were the reasons for death.

On the situation of those who suffer from mental illness due to their experiences during the movement, little research has been one the 56 of those people who have died, 13 of whom committed suicide.

The titled should be "Of those who were injured during the Kwangju uprising and have since died, 10% committed suicide". It's also a bit misleading to refer to it simply as May 18, as it took place over 10 days. The article also refers to other figures, perhaps related to the number of people who received compensation.

As of 1998, 4,540 people were paid compensation according to the 5.18 Compensation Law, of whom 154 were killed, 66 were missing, 94 were dead after injuries, 3059 were injured, and 1,168 were detained and tortured.[...] 639 of the injured victims fall under the groups of the 1st (100% disability) through 9th (50% disability) impairment, who are judged to be incapable of doing any work due to physical impediment or to be pretty limited in finding physically suitable jobs.

The above statement comes from the book below, edited by Juna Byun and Linda S. Lewis. 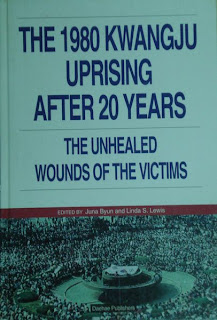 This book looks closely at those who had to live with injuries after the uprising. As Minoh Lee puts it,

no systematic governmental treatment plans for their injuries were formulated until the early '90s. These victims were socially and politically ostracized as rebels and spies and were not able to come forward for treatment before the 5.18 Special Law was enacted in 1995. Also, most of the governmental measures concerning 5.18 related issues were largely intended for patching them up with compensation payments and superficial memorial events rather than fundamentally healing the victims' trauma.

In considering the number who have died due to their injuries, it might be worth mentioning the official death toll, which Lewis discussed in her book Laying Claim to the Memory of May:

The official government death toll (in 1997) was 238; that includes 191 known fatalities (164 civilians, 23 soldiers, and 4 police officers), as well as 47 of the missing who have now been classified as victims. Responsible estimates in Kwangju would now put the figure up to only about 200 more, or between 400 and 500 victims.

As I mentioned here, she noted in her essay "From Heroic Victims to Disabled Survivors: The 5-18 Injured after Twenty Years" (in the book Contentious Kwangju), that as of 1997, 120 additional victims had died. 69 were gunshot victims in their twenties and thirties; only 17 were in their sixties or seventies. As the article above noted, 376 people who suffered injuries during (or who were imprisoned and tortured after) the Kwangju Uprising have since died. As we see above, 120 died between 1980 and 1997, while 256 have died in the last ten years. The figure 376 is quite a bit higher than the the official death toll of 238.

The quote which opens the introduction to The 1980 Kwangju Uprising After 20 Years, is pertinent when considering the high rate of suicide among the survivors:

"Had I died then, I wouldn't have suffered like this.." (Sang-chul Park, 13 years old when paralyzed from the waist down due to a gunshot wound, Chonnam Provincial Daily News, May 20, 1995).